FROM A HANDFUL OF DUST celebrating Cheddar Man, 7.2.18 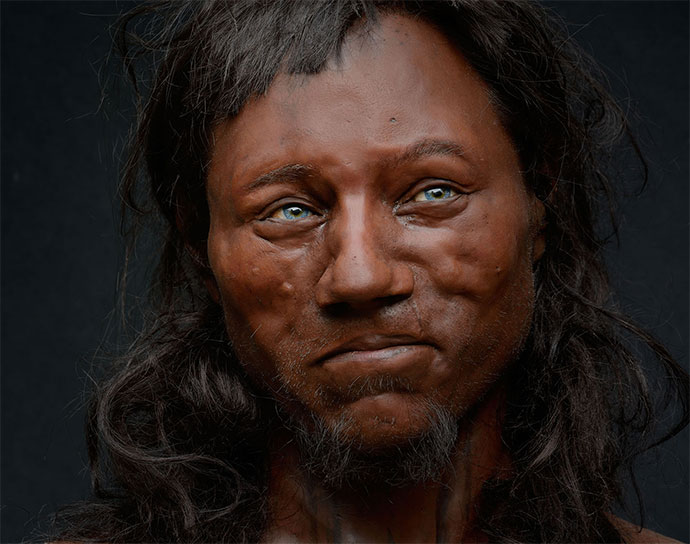 1.
From a faceless skull on a shelf in the shadows
and a tiny handful, a genome’s worth of bone dust
this revelation of a reconstructed person
with his tanned brown black skin and blue eyes,
gazing not level, but skywards.

Wandering aboriginal, hippie hair
parted back behind his ears…
White a much more recent invention
exposed to the necessary absorption of sunlight

He raises his eyes.

One of only twelve thousand on this whole island
with its dense woodland his kind begins to clear
in the name of a home that hasn’t been seen before.

Forgotten gods of rain, moon and harvest
all the season’s twists and sudden turnings
under seventeen million mysterious stars
he gazes at for an answer

that is a name no one can speak
where a strange evolution is carried
beyond his cannibal forbears
who fell outside its pleasure,
into plummeting temperature.

2.
Cheddar Man comes alive after twelve thousand years,
and he’s a star: flash bulbs surround him,
he’s looking like he’s won a BAFTA or a grammy
which is very cool indeed if he could say so
but his mobile lips are sealed: has no words
for all this excited activity around him,
doesn’t understand he’s a racial icon
and that Britain First has just collapsed on impact
like one of those many grey earthquake buildings
with all the white consumers of MacDonalds.
into a much more amazing truth—
this liquidity of who we are beneath
the fantasy of the master race and plan
above and below, and for as long as we are here.

3.
The earlier draft surpassed,
looking rather the worse for wear
like a battered minor Shakespearean villain
bearded, moustached, and more than faintly unbelievable

now deconstructed by the reality—
walking across the Doggerland
in his skins, for a new land

on the shores of Albion in the mists
of time that would secrete him, as if randomly
preserving his head in that cave like a capsule,
released into a future

where we would have the need we see in him;
in the mirror of his mouth—and his sobriety.

View all posts by Jay →
This entry was posted on 21 February, 2018 in homepage and tagged Jay Ramsay. Bookmark the permalink.