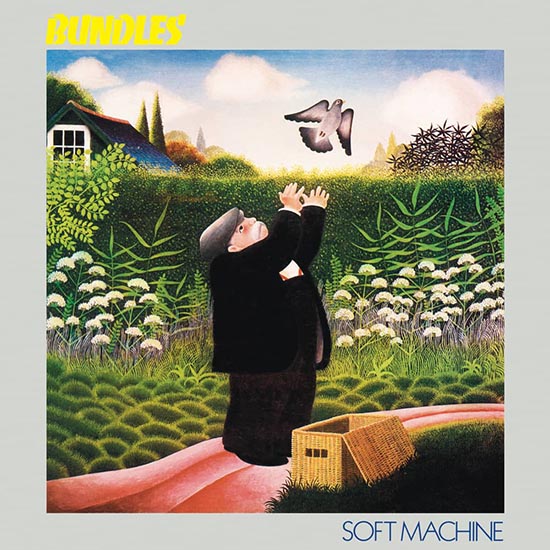 Received wisdom and mainstream popular music history will tell you that Soft Machine started out great and went into gradual decline following the departure of singer and drummer Robert Wyatt and the band’s move into jazz-rock territory, not to mention a tendency towards line-up changes.

Received wisdom, however, is wrong. There are some great moments on the first two Soft Machine albums, but mostly they are quirky rather slight songs, some left over from the original Daevid Allen incarnation, which never made an official studio recordings (although demos and live recordings have been released in various formats over the years), others showing the romantic influence of Kevin Ayers, who hung around long enough to make the first album but was also soon gone. A Peel Sessions version of ‘Moon in June’ is outstanding, but it also signalled the band’s move to album-side compositions on Third, which like the unimaginatively titled Fourth, Fifth, Six and Seven would (apart from ‘Moon in June’) offer extended instrumentals, where keyboards, guitars and saxophones would intermingle and argue over sustained drumming.

It’s wonderful stuff. Mike Ratledge was an extraordinary keyboard player, Hugh Hopper an outstanding bassist, whilst Karl Jenkins was adept at saxophones and synthesizers, and Elton Dean’s alto sax playing was simply astonishing. Bundles, released in 1975, two years after Seven, saw a major change however, in the form of Allan Holdsworth, whose guitar was foregrounded in a way the instrument hadn’t really been before. He joined Ratledge, Jenkins, bass player Roy Babbington and drummer John Marshall, in creating an accessible and rocking album.

Bundles opens with the five part ‘Hazard Profile’, which enters at full steam and hardly lets up over it’s 20 minute duration, although the short second and third part offer a brief breathing space between the busy and loud others, which riff and repeat at high speed and volume. The minute-long ‘Gone Sailing’ is a more melancholic interlude, a guitar solo, before the title track crashes in, all cymbals and guitar over keyboard sustains and crescendos. Then, without pause, we are in the ‘Land of the Big Snakes’, where guitars and keyboards slide around each other and entwine before slithering away into the quiet.

Then we meet ‘The Man Who Waved at Trains’, a more restrained, sax-orientated piece, which changes its melody and becomes ‘Peff’. This gradually increases tempo and musical activity, one might say rocks out, before fading into the distance. Then it’s the turn of John Marshall to be featured, with ‘Four Gongs Two Drums’, the only drum solo I can consistently stand listening to. It does what the title says, exploring and juxtaposing said instruments for two-and-a-half minutes, an exemplary model of focus and brevity. Then we are off to ‘The Floating World’, a moody track built from hypnotic musical sequences which ebb, flow and drift for the duration, and bring the album to a calming close.

But wait, there’s more! Cherry Red have gathered up a live set from Nottingham University in October 1975 (previously available, no doubt semi-legitimately, as British Tour ’75) as a bonus disc. It’s reasonable bootleg quality, nothing more, and sees the band bringing an aggressive focus to many of the Bundles tracks along with a few others that would end up on the next album, Softs. There’s an energy and freedom evidenced here, with ‘The Man Who Waved at Trains’ and ‘Hazard Profile’ being particularly knockout performances. A truncated ‘Floating World’ does little more than drift aimlessly however, and ‘Side Burn’ turns out to be a painful 10 minute plus drum solo. (Time for a leisurely visit to the bar and toilet.) If the final couple of tracks get a little bit too widdley-diddley (a technical term), the band (including new guitarist John Etheridge) can perhaps be forgiven – I’m sure it was wonderful to behold and listen to live.

If you are open-minded enough to not be put off by the ‘jazz-rock’ label (and I can’t think of another category or genre to call it, ‘jazz-fusion’ is an even worse moniker), then you’ll love this reissue. Like Pierre Moerlen’s Gong, Ian Carr’s Nucleus, and many others, it’s time that late period Soft Machine got some new critical recognition and sold a few more albums. This is lively, innovative and engaging music.

View all posts by Rupert →
This entry was posted on 9 July, 2022 in homepage and tagged Bundles, Rupert Loydell, Soft Machine. Bookmark the permalink.