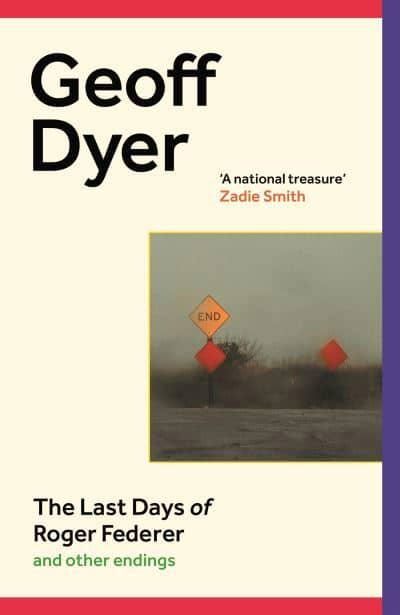 The Last Days of Roger Federer and other endings, Geoff Dyer
(283pp, £20, Canongate)

Thankfully this isn’t a book about tennis. Yes, Federer is in there, along with Dyer’s own sports injuries, but so are Nietzsche, D.H. Lawrence, Bob Dylan, De Chirico, Coltrane, Beethoven, Larkin, Camus, Gillian Welch, and Louise Gluck. In fact, I think you’d be more likely to win a bet that anyone you can name is in here than lose your money.

Dyer is an expert at thematic sidestepping and inventing strange links between people and events; he always has been. I was trying to think of others who do something similar, and apart from some of Annie Dillard’s books, when she moves away from nature writing, I couldn’t think of anyone. Dyer mentions Dillard, too, but mainly in passing, although – to be honest – most of the comments, stories and asides in his book are fleeting encounters as he writes on the way to somewhere else.

Where is that somewhere else? Is it an ‘insightful, often hilarious, take on art, life and sport’, ‘wry meditations on mortality and late style’, or a blend of ‘criticism, memoir and repartee’? Probably, possibly, maybe, yes. Dyer uses all of these possibilities, often at the same time, to discuss where we are now, living in a world, society and culture that seems to be lurching to an end.

The memoir part is because this book is all about Dyer’s own passions and experiences, but told in an inclusive and original way. Events, thoughts, artists and writers (and their works) pile up, even as he admits that his own ‘unwritten and unwriteable books become part of—get folded into a book—one can write. This  one.’ (p225) I guess the criticism is how he discusses art and writing, but I’m not sure I’d use the word mortality. Perhaps ‘the human condition’ would be better?

Dyer is an expert at writing seemingly unwriteable books, and seldom trips himself up doing so. If I found Broadsword Calling Danny Boy, his paean to the film Where Eagles Dare, somewhat slight and rather silly, despite really wanting to love it, in the main, from his debut book about and in response to John Berger’s Ways of Seeing, to his erudite book about how we view photographs, via books on jazz and Venice (among plenty of others), he is surefooted and original, just as he is here.

Dyer’s ability to dance through genres and subject matter, drawing on his own experiences and – one imagines – his bookshelves and music collection, allows him to highlight how the good and great that have impacted on him. But the minor, the discarded, and the personal also make appearances. Dyer may have intimations of mortality, as most of us sometimes do, but he has also lived life to the full. Not in a silly must-try-this-before-I-die way, but one where he has paid attention to what he sees, hears, reads and experiences.

This book wears its knowledge lightly and offers its opinions and comments subtly. Rather than showing off about what he knows, Dyer shares it and seduces the reader with it. Despite suggesting that ‘My theme, I have no doubt, is giving up. That’s what kept me going’, Dyer is not a quitter, neither is he morose or miserable (though he can be smartarse or injured). Instead, he is a quiet celebrator of music, poetry, sport and personal achievement, an unexpectedly human polymath who even as he doubts his ability to do so, spreads knowledge and encouragement, sharing moments of doubt, passion and elation in ways both engaging and original.

View all posts by Rupert →
This entry was posted on 2 July, 2022 in homepage and tagged Rupert Loydell. Bookmark the permalink.