Ginsberg weekly round up. 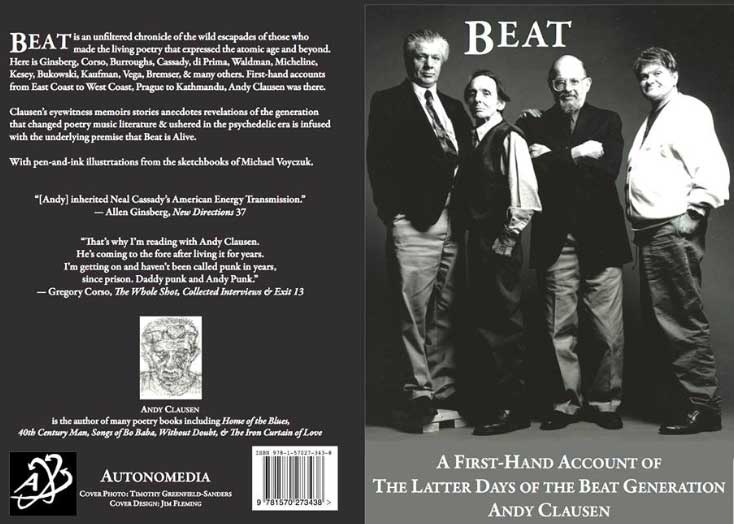 Andy Clausen‘s  Beat –  A First-Hand Account of The Latter Days of The Beat Generation, long-awaited, finally appears from Autonomedia – Beat is, according to its jacket-blurb,  “an unfiltered chronicle of the wild escapades of those who made the living poetry that expressed the atomic age and beyond….Clausen’s eyewitness memoirs, stories, anecdotes (and) revelations of the generation that changed poetry, music, literature and ushered in the psychedelic era (are) infused with the underlying premise that Beat is Alive!”Here, Andy recollecting his friend, Gregory Corso

There’ll be a book-launch in New York for the book at The Bowery Poetry Club this coming Sunday from 3.30 to 5.00, featuring, as well as Andy, Pamela Twining, Danny Shot, Bill Finkelstein, and Eliot Katz

Just opened (and up through to November 21st) at the Lyet Gallery at Pennsylvania’s Elizabethtown College, “Lawrence Ferlinghetti  – An American Cultural Icon” an exhibition, curated by art dealer and collector, George Krevsky, of approximately twenty of Ferlinghetti’s paintings  (“Invariably,” Krevsky declares , “I’ll be at an art fair and have Lawrence’s work on the wall and someone will walk up and say, ‘Ferlinghetti. I didn’t know he was a painter.’?”). “And it drives Lawrence crazy. He’s always tried to keep his two careers separate.”

“This illustrated lecture, “A Life of Olson, with Glyphs,” will feature a sequence
of projected color Glyphs with text and comments on key points in Charles Olson’s life
and times, including the personal interactions of Olson with Ed Sanders beginning
in 1962 and continuing until Olson’s passing in early 1970. Included will be a
tracing of Olson’s remarkable influence on poetry and writing, lasting into this era
and beyond, plus Sanders’ attempt in 1968 to spur a relationship between Olson and
Janis Joplin, and other incidents in Olson’s epoch-stirring life”

The Italian “Beats”  (pre ’68)  –  We mentioned Francesco Taberelli‘s film, I Figli dello Stupore – la Beat Generation Italiana a few weeks back. Credit should also be given to Alessandro Manca, the author and initial researcher. More about that book/that film and that occluded phenomenon – (Gianni Milano, Andrea d’Anna, Eros Alesi & others) – in Pangia, (in Italian) – here

The conservative National Review clasps Kerouac to its bosom

Tweet
This entry was posted on 3 November, 2018 in homepage. Bookmark the permalink.