Give Me More by Léonie Scott-Matthews 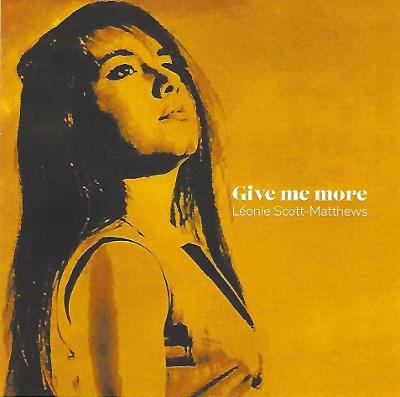 The CD of Léonie Scott-Matthews’ poetry is a treat, with a trick or two. Produced by Mathew Kitchener, disc one spins twelve tracks of musicians and actors performing her poetry, and recorded at Pentameters Theatre, founded 50 years ago by the actor/producer/playwright/poet.  Disc two contains the same poems read by Léonie Scott-Matthews herself.  Interestingly, and for me (as must be said these days)  disc two is the more powerful, with the visceral link of poet’s voice with her subject matter, much of it concerning love and addiction. It’s intense stuff,  but from a winner in both respects. The lyrical beauty of Guernsey Sonnet (so well done on the actor’s disc one by poet Gilles Madan) to Locked Ward shows an incredible range and love of life, whatever the circumstance. The standout tracks on disc one are (again, for me) Zoe Aronson performing Love Was and Godfrey Old reciting and accompanying himself on Monologue to a Mouth.  The latter is an account of the poet’s encounter with theatre director Charles Marowitz at a dinner table in 1964.
I asked Léonie Scott-Matthews how she felt about hearing her work performed by others. She said,   ‘What an honour and privilege to hear one’s own words expressed in music and through other voices.’   For a copy of Give Me More, contact Léonie Scott-Matthews at   http://pentameters.co.uk/ or find it on you tube www.youtube.com/watch?v=p-eUGl0Ll2o
Jan Woolf
Tweet
Tweet

View all posts by Jan →
This entry was posted on 16 October, 2021 in homepage and tagged Jan Woolf, Leonie Scott-Matthews. Bookmark the permalink.

One Response to Give Me More by Léonie Scott-Matthews