Give Power to the Powerful 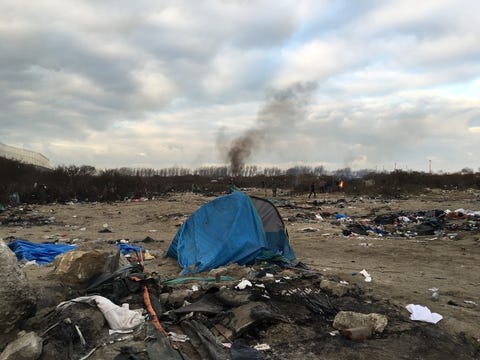 At some point in 2017, travelling from Germany to the UK, via France, I stopped overnight in Calais. This is my diary note, dated 24th August: ‘Two years since I last visited the ‘jungle’ camp. I don’t see migrants around the French Docks anymore, as the temporary camp was demolished. Bulldozers flattened tents donated by NGOs, improvised kitchens and food distribution points, and the school built out of cardboard and polystyrene. Silence surrounds the old site, measuring our collective dissociation from tragedy. Silence as anonymous as the stories told by Syrian refugees, as anonymous as their predicament. I wonder what happened to the Syrian people who tried crossing the European continent to reach Britain, Italy, France, and further up North.’ It seems that they came and went. In and out of history, their tragedy captured the West’s attention for as long as their presence disturbed the flux of goods and tourists at the French border.

But history is unforgiving and it does not forget. Diplomats, academics, politicians, strategists are currently gathered at the Munich Security Conference, which takes place from February 14 to 16, in Germany. The conference’s agenda covers talks and discussions around energy, food, climate and internet security as well as travel, investments and foreign policies. It is an attempt to re-think the European priorities, at times marked by insecurities brought on by the Covit-19 outbreak and economic trade volatility. I would have thought this is an important enough event to require British presence, but unfortunately, the UK is missing the agenda altogether.

In an interview for the BBC Radio 4, David Miliband, former British Foreign Secretary, currently CEO at International Rescue Committee, expressed his disappointment at the lack of vision in British politics and the inability to work towards a wider scope rather than its own short-term goals. I can probably understand Miliband’s bitterness about the British politics. What makes me curious about Munich Security Conference, which Miliband is currently at on behalf of his NGO, sits plainly in black and white on the first day’s agenda: Human Security and Westlessness.

There is a strong sense that Western democracies are beginning to see their power and influence fading, overwhelmed by complex global issues which require solutions based on vision and multi-national collaboration. To put it plainly, the West has started to understand that ‘the cold reality is not that autocracy will triumph and democracy will fail, but rather that the 500-year-long era of Western global supremacy is coming to an end’ (Barber, 2019). One could go even further and say that the West has lost it’s power with the rise of populist nationalist ideas, which are based on hostility to immigrants and protectionist economic interests. Francis Fukuyama sees this as a ‘fundamental mistake’ (2019) which facilitates abusive use of power and threatens the liberal order.

Populist nationalist ideology brushed under the carpet the tragedy of thousands (if not millions) of Syrians currently displaced all over Europe, unsure about their migration status. In Britain, for instance, 45,255 people are waiting for an initial decision on their asylum applications, and more than half have waited for longer than six months already (Refugee Action, 2019).

The real power of the powerful is in the detail, in small actions which make big differences. The real power is about remembering, not forgetting, tragedy, and it’s about engaging resources to support communities, not interests. The silence coming from top level politics is reaching epidemic proportions and it says a lot about forthcoming priorities which ignore issues concerning people, and concentrate on managing databases. And if nobody keeps on talking about it, the Government’s job will soon be nothing but a walk in the park to serve its own interests. Silence gives more power to the powerful.

Fukuyama, F. (2019) in: Spear’s, Arun Kakar: Francis Fukuyama on Trump, and why Brexit could be the end of Britain, 25th September 2019. Available from: https://www.spearswms.com/francis-fukuyama-interview-spears/

The conference is livestreamed here https://securityconference.org/en/msc-2020/live/


Tweet
Tweet
This entry was posted on 22 February, 2020 in homepage and tagged Maria Stadnicka. Bookmark the permalink.