Gunfight in Turkey: After Tahir Elic 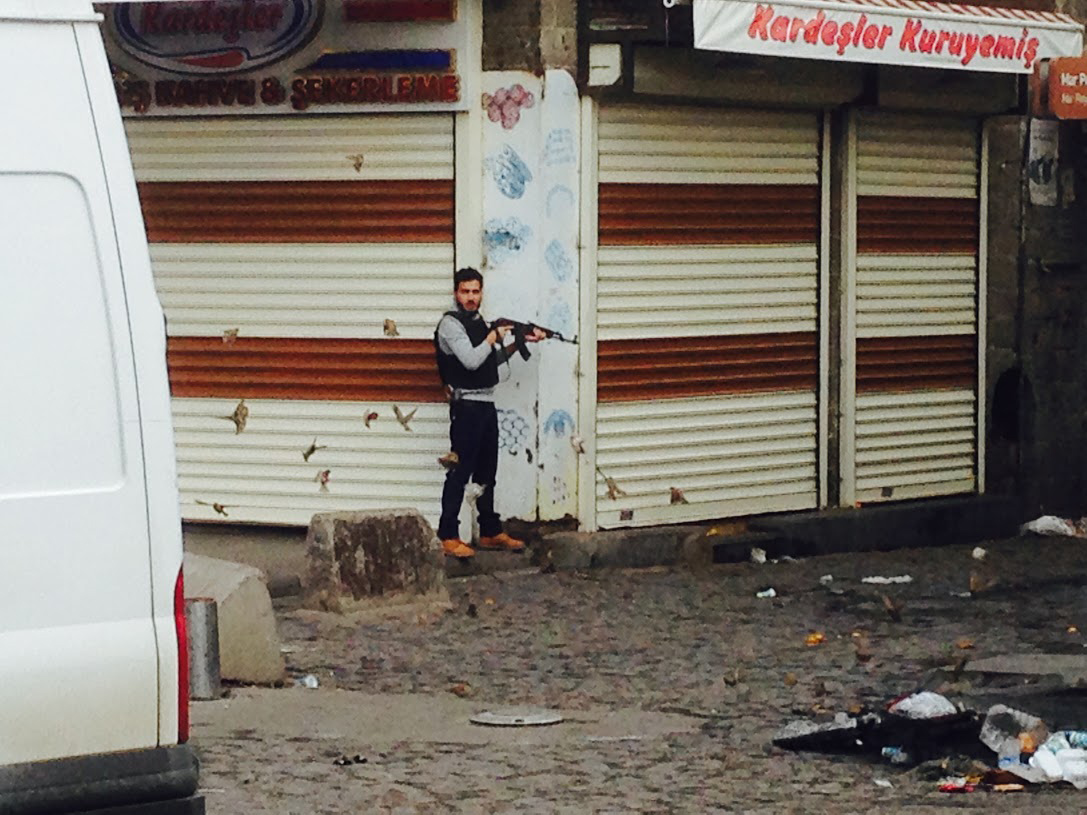 Kurdish human rights lawyer Tahir Elci was gunned down in South Eastern Turkey after giving a press conference calling for an end to violence in the region. His remarks were clearly directed at the Turkish government and its latest brutal clampdown against the country’s Kurdish population. Elci had been due to stand trial for remarks he made during a televised debate on CNN TÜRK, where he asserted that leftist group the Kurdistan Workers Party (PKK) “is not a terrorist organisation, it is an armed political movement with considerable support”. Despite this, within an hour of the shooting ­ and before any kind of conclusive criminal investigation could possibly have been made ­ Turkey’s president Recep Tayyip Erdogan came out and publicly made the highly illogical seeming claim that Elci had been assassinated by the PKK. Erdogan then went on to use Elci’s murder as justification for further escalations in his government’s military campaign against the PKK and other Kurdish separatist groups; this led many to conclude that it was in fact the government, not the PKK, behind the shooting.

I was in Istanbul at the time with my cameraman Aleksey and Turkish translator Ece. We were finishing a story on Turkish fascist paramilitary group the Grey Wolves. It was my birthday and I was looking forward to finishing for the day so I could go and get drunk. Just as we were wrapping up filming, our producers in Moscow called and told us the news of the shooting. We decided to stop what we were doing and throw everything into covering the fallout from Elci.

Details rapidly began spreading around Turkish social media of hundreds of anti­government protests being planned across the country that day. We arrived near İstiklal Caddesi, where one such demonstration was due to take place, fifteen minutes early. As our cab pulled up we could see large groups of protesters making their way through the streets waving cardboard black and white prints of Elci’s face. Some carried the purple flag of parliamentary group the People’s Democratic Party (HDP), who support grassroots and participatory democracy. Our driver glared at them and muttered a disparaging remark in Turkish. He agreed with Erdogan’s claim that the PKK had been behind Elci’s killing. When Ece disagreed with him, he turned and snapped, “So you’re one of these people that wants to see the country divided?!”.

We got out of the car and followed the protesters down a narrow road to the main meeting point. Ahead, where our road intersected with İstiklal Caddesi, we could see vast numbers of people marching in the direction of Galatasaray Meydanı, all of them chanting “He’s a thief, he’s a killer, Erdogan!” at the tops of their lungs. As we approached, panic broke out and everyone started running in the opposite direction. Police had charged the protesters, letting off a water cannon and firing teargas canisters. We were hit with gas and had to retreat back up the road. Others crowded into shops and held the doors shut, attempting to prevent the gas from getting in. At the top of the road we regrouped with other protesters and headed back towards the meeting point, our eyes stinging from traces of teargas still lingering in the air.

Eventually, after several skirmishes, we joined a crowd of protesters and managed to push through the police lines and reach the meeting point on Galatasaray Meydanı. Here, the roar of the crowd was thunderous as people defiantly pumped their fists in the air, shouted anti-Erdogan slogans and waved HDP flags. A wave of outrage swept through the crowd, rising as a sudden swell of whistles and shouts, as fire­hose trucks rolled in alongside masses of armoured police brandishing teargas guns, truncheons and shields. It was adamantly clear the authorities weren’t going to let this peaceful demonstration gain any further momentum.

Instinctively, the crowd broke and splintered off in all directions before it could be attacked. We stuck with the larger group and headed off down one of the main avenues. But it was impossible. Armoured police seemed to stand at every corner, firing off tear gas and battering people with truncheons. The group split again and again as we ran to escape. For Ece, it all proved to be too much. We lost her in the crowd. Meanwhile, Aleksey and I followed behind a squad of police that were chasing down a small splinter group of protesters. The fleeing demonstrators managed to lead the police officers beneath an underpass. Protesters gathered on either side of the road above them and began to rain down bottles, fireworks and bricks. Another wave of teargas. This time, particularly bad. The crowd was forced into a small cafe where stunned locals helped people splash water from bottles and the kitchen and bathroom sinks into their swollen eyes. All the while we could hear helicopters hovering low over the city, intermingled with the wails of countless police sirens and the constant blasts from fireworks and teargas launchers.

When it had all died down, we regrouped with Ece and decided we should go to the area of Diyarbakir where Elci had been shot. With reports coming in of violent clashes between demonstrators and police, our producers had set about trying to arrange how they could deliver us a set bulletproof vests and helmets. We turned the offer down. Our Kurdish activist contacts had pre­warned us not to do anything to draw too much attention to ourselves as international press. Authorities are actively hostile towards foreign journalists’ attempts to report anything deemed sympathetic to the Kurdish cause: walking around wearing bright blue body armour with “PRESS” inscribed across it makes you an open target for arrest or possibly worse.

By the time we arrived in Diyarbakir the following evening, much of it was on lockdown. The old city, hemmed in by Roman fortress walls, was cordoned off behind police barricades. As we walked the perimeter trying to find a point of entry, automatic gunfire began to burst sporadically from within the old city. Security services had begun to clash with armed Kurdish guerrilla. Sounds of fighting intensified until ongoing exchanges of fire became interspersed with explosions from grenades and other fragmentation devices. At the last entranceway we came to, the choking scent of teargas was so potent that we all began to cough. We approached, and an armed policeman wearing a black balaclava yelled out at us in Turkish, waving us away with his assault rifle. The situation was clearly getting way too volatile to be out walking the streets at night so we decided to head back to the hotel and wait until morning.

The following day, the barricades to the old city were removed and so we grabbed our equipment and began making our way back. Soon, our path was blocked by police engaged in an armed standoff with alleged PKK militants. A small fleet of armoured cars was parked alongside a dozen armed security personnel. Crowds of local media and curious bystanders had started to formulate when a single shot rang out down the narrow street, causing the crowd to panic, scattering briefly and then reassembling. Another shot, and the turrets on the armoured cars began to swivel around, firing off several teargas canisters into the crowd. Pops of the canisters were going off all around, and I realised walls of gas were encroaching on us from every side.

People began running in all directions, coughing and clutching their clothing to their faces. I found myself unable to open my eyes, struggling hard for breath. Aleksey grabbed me, pulling me over to where a shopkeeper was calling for us to get inside. The man firmly closed his door, producing bottles of water to rinse our eyes; when we tried to pay him for the water he refused to accept our money.

Back outside, a frantic group attempted to revive a man lying unconscious on the ground from too much gas, his eyes rolled back into his skull. People poured water onto his face and shook him; others screamed at the police, demanding that they call an ambulance. In the midst of this, a man who had been staggering deliriously down the road collapsed, and yet more people rushed over to tend to him. A woman came running past us, fighting back tears as she clutched her small children, all of whom were wailing from pain, with bloodshot eyes, excess saliva and mucus streaming down their faces.

After our report aired, my producers in Moscow decided to pull us out. It was too dangerous for us to be in an urban warfare situation with no body armour and scant possibility of embedding with a military group who could protect us. Hostilities between Turkey and Russia were rapidly escalating, increasing the likelihood that Turkish authorities might try to detain us.

Every day now I see yet more accounts by local activists detailing the brutality of Turkey’s clampdown against the Kurds. Now, through the rise of the Patriotic Revolutionary Youth Movement (YDG­H), PKK affiliates who have managed to periodically seize control of entire streets and neighbourhoods in the southeast of the country, Turkey’s actions seem to inadvertently fuel Kurdish resistance. This is a war that Erdogan can never win, yet sadly one that will again cost the Kurdish population dearly. Tahir Elci was a man who tried to stand in the way of this bloodshed and he ended up being killed as a result. As this violence spills over into the rest of the country it is vividly apparent that his death was not only a great loss for the Kurds, but for all of Turkey. 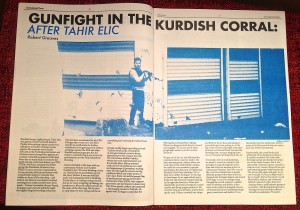