Radical Escapism in the Age Of Paranoia, by Joe Banks 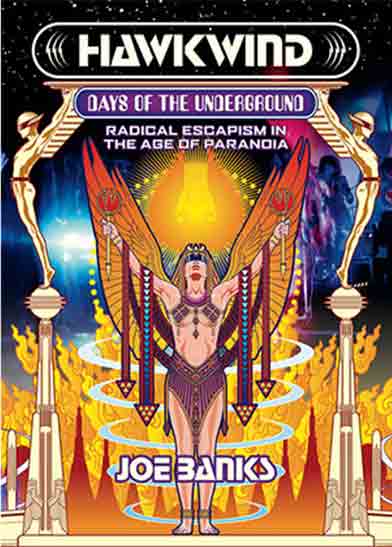 As a partially lapsed irregular of the Hawkwind cult, fated to retain an observational or agnostic distance, I assumed I’d be unable to orgone accumulate sufficient interest to review this epic book. Such a task would surely require the fervency of a devout believer? Within two or three pages I realised I was wrong. The dedication Joe Banks and others have put into every one of its 500-odd riveting pages is astounding. Even readers who don’t know or like Hawkwind will be fascinated by the detailed context if nothing else. “All successful religions have an enduring creation myth”, states the author near the beginning. Hawkwind: Days of the Underground could veritably become the Hawkwind bible.

That my favourite Hawkwind track would either be The Demented Man[i] (forever associated with wandering Aylesbury in the late 70s – despite the town’s land-locked lack of seagulls) or the prescient Welcome to the Future[ii], coda to Space Ritual:

shows that I haven’t kept up with Hawkwind’s forty years of shapeshifting. Is there some contradiction between the way of life of a counterculture “Hawkfan” and a sumptuously illustrated book? As this one resists the coffee-table mould, I don’t think so.

“Punk rock started because in every small town there was somebody who liked Hawkwind”: Stephen Morris of Joy Division/New Order is quoted as saying in the introduction – a grand claim soon vindicated: Hawkwind’s ad hoc methods of operation, improvisatory freedom and street spirit prove it over and over. Free concerts under the Westway and outside the fences at the Isle of White Festival . . .  In his interview, Nik Turner goes further: “I don’t think anybody else gave away free drugs[iii] and newspapers!”

Though drawn to the anti-establishment anarchy of punk, I was never sold on its look, the fashion that quickly sabotaged it, the appearance on the cover. Wandering Aylesbury late one night (circa 1977) a group of punks caught sight of me: “‘Ippy! Get ‘im!” Had flight proved necessary I could likely have out-run them, but just then a local hero and friend of mine chanced around the peninsula of buildings where the High Street merged with Cambridge Street. Wyllie E Coyote driving a lorryload of ACME dynamite could not have been more effective. The punks’ reaction was cartoonlike “King Tut! Let’s get out of here!”

King Tut wasn’t a great fan of Hawkwind but someone he knew – Martin, who sported a matted Robert Plant perm through which he was rarely seen – was. A girlfriend of mine had previously given me Hawkwind’s 1976 compilation Roadhawks, but that was way too earthbound for Martin. In his bedsit off the Tring Road opposite the vast, Hazell Watson & Viney[iv] printing works[v], Martin, oblivious to paranoia was yet intent on radical escapism. Cross-legged on the floor, under the influence of substances best left unmentioned, he would hold court in his room of mattresses. The space ritual would begin in twilight but for his light stick[vi], which he would shake in frenzy all through Orgone Accumulator, Brainstorm and Master of the Universe.

Back in the days of decent-sized LPs, cover art could be a powerful incentive or disincentive and the fantasy works of Roger Dean and others (which looked like they were aimed at 12-year olds) were always a major stumbling block for me. These days, nostalgia for the timewarp makes John Coulthart’s new Flash Gordon, Art Deco pastiche for Hawkwind: Days of the Underground, reasonably acceptable, though personally I would have used the photo of Nik Turner with his flute:

One advantage of growing up in Aylesbury was Friars[vii] – “Europe’s biggest music club out in the sticks” – yet somehow, I never caught Hawkwind there. My only experience of them live was at the 1977 Reading Festival, and it’s a measure of the detail of Hawkwind: Days of the Underground, (not to mention its index and wealth of endnotes), that I found this entry to revive my memory:

On 28 August, Hawkwind play the Reading Festival again, and deliver a tour de

dance, fire-breathe and appear as spacemen and monsters. Calvert’s props include

a gigantic reefer, a grotesque alien head and his swords, which he uses to cut up

an American flag during ‘Uncle Sam’s On Mars’. He then strews the pieces about,

to play amid the shredded remains of the Stars and Stripes. 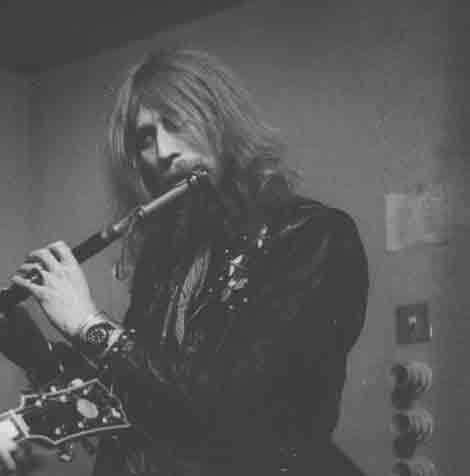 Every time I pick up this book, I come across something unexpected: this morning an interview with Michael Moorcock, whose suggestion “that ‘the sixties’ lasted as long as a relatively progressive government was in power, and ended around 1980” is worth thinking about. The essay which follows, immediately does – and referencing the concept of the “long 60s” revitalizes ‘escapism’ as a valuable and radical state of mind rather than an ostrich one.

Then, as now, mainstream society is the ostrich.

[v] The houses and factories, in fact the whole, intensely Victorian atmosphere of the Tring Road roundabout has now long gone.

[vi] Martin’s light stick was like a stubby version of Old Father Time’s in Led Zeppelin’s 1976 concert film The Song Remains the Same, or the lightsabers (sic) of Star Wars (1977) – a  film I had no interest in and only viewed when my son wanted to see the re-release in about 1998.

Tweet
This entry was posted on 19 September, 2020 in homepage and tagged by Joe Banks, Hawkwind: Days of the Underground, Lawrence Freiesleben, Radical Escapism in the Age Of Paranoia. Bookmark the permalink.