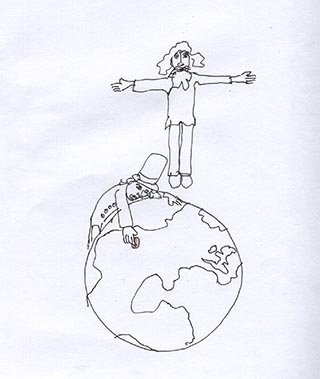 ‘You should be miserly with your energy’.
C. Castaneda

Gravity is the most powerful force in the human experience and to oppose this force requires energy.

Fortunately, humans have been endowed with a bony skeletal framework which, with the cooperation of various muscles they may, through complex leverage, haul themselves, (against the pull of the earth’s gravity), into an erect posture.

Without this skeleton of course the operation might be rather more difficult.

The human, now in this erect position, must lift one foot (against the pull of gravity), swing it forwards and then allow gravity to pull it back down again.

Then the other foot likewise, (with a similar expenditure of energy)

This action is commonly known as ‘walking’.

All resistance to this planet’s gravity costs energy, therefore to carry lumps of heavy metal around in one’s pocket or bag might (under these circumstances) seem rather foolish; particularly if that metal is virtually worthless and the energy thus expended – wasted.

One and two ‘P’ pieces, (brown ones), are fashioned from a rather heavy base metal, and to carry such a dead weight around all day uses a measurable amount of energy.

Therefore one might say that since they are virtually worthless they should just be thrown away; or better still, unloaded onto someone who will welcome the extra weight, and so revolutionise the economy at the level where it really matters – the street.

Every beggar presents an opportunity to save some energy by unloading a significant amount of weight.

Were this to become a common practice beggars would certainly be rather more affluent at minimal expense, and the electorate would literally walk with a lighter step.

So give them your brown ones.
They’re worth fuck-all anyway.
Don’t waste energy.
Get rid of that weight.
Walk lighter and…

Give them your brown ones!