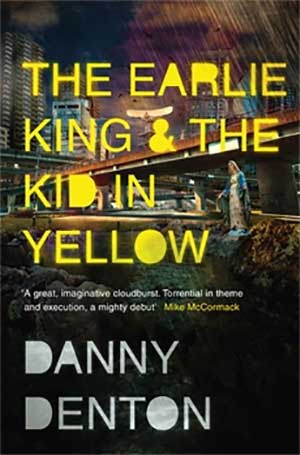 ROLL UP! ROLL UP!

to hear a tale of

RAIN and FIRE, of KID and KING!

If, like me, you’ve had enough of the British ‘summer’ (as I write this it’s grey and misty here, despite a forecast of 29 degrees and sunshine) then you’ll feel much better if you read Danny Denton’s debut novel, which is set in a future Ireland where the sea has risen to flood half the land and it always, that is permanently, rains.

The novel is mostly set in a half-derelict Dublin ruled by gangs, who sell drugs and control those around them by threats and violence. Everyone wears waterproof ‘skins’ to keep out the rain, everywhere is damp and mouldy, stinking and rotting. The Kid in Yellow is a runner for the Earlie King and his gang, but makes the mistake of getting the King’s daughter pregnant, which means he has to do a runner. Love gets the better of him, however, and he comes out of hiding to rescue his babba after the mother, T, dies in childbirth.

So far, so Romeo & Juliet (well, sort of), but this dystopia embraces mythology, multiple points-of-view, ageing technology, and a set of characters that Shakespeare would die for. Or probably did. Some chapters are told by Mister Violence, others by a private detective; others are presented as excerpts from a play script, seemingly written even further in the future and looking back; others are narrated in a more traditional yet rambunctious and lively manner.

The story is full of sodden characters, immersed in water, drink and violence. Its different voices and narrations keep the reader intrigued, as does the over-riding sense of displacement, of a mythical journey in the making. I’m no expert on Irish myths, but I suspect if you are then Denton makes use of some known tall tales, even though there is no grand conclusion to the novel, just a bunch of questions asked – although they are the questions I wanted to ask anyway. (Not that they’re answered mind you.)

If this sounds chaotic, it is; if it sounds like a difficult read, then it isn’t and I’ve done Denton a disservice. This story rocks and rolls along, be it in the city in hiding or moving stealthily around, or travelling across the land and sea. The Kid in Yellow navigates his world with ease, with piratical swagger, dragging the reader in his wake, shouted at by his brother, sometimes accompanied by Honest John, often chased by the Earlie King’s henchmen. There’s a bit of romance, a sense of thriller, a hint of future shock, but mostly there’s the sense of a new author writing the most exciting novel I’ve read in a very long time. Put on your reading wellies and give yourself a treat: this is a novel to wade into and luxuriate in.

View all posts by Rupert →
This entry was posted on 6 July, 2019 in homepage and tagged Rupert Loydell. Bookmark the permalink.