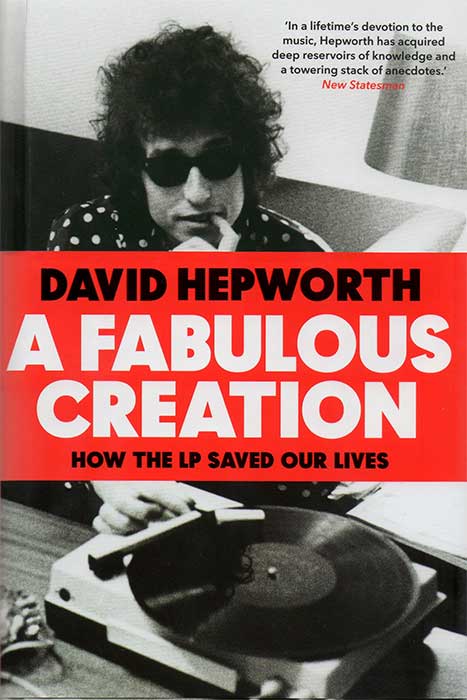 ‘A FABULOUS CREATION: HOW THE LP SAVED OUR LIVES’

This is not another of those Greatest Albums of all time compilations, just as it is not an academic history charting the evolution of the vinyl record album. David Hepworth’s story starts in 1967 with the social and cultural epiphany that was ‘Sergeant Pepper’s Lonely Hearts Club Band’ – ‘there was no single taken from ‘Sgt Pepper’ any more than there had been a single taken from Beethoven’s Fifth,’ and then takes us year-by-year through to 1982 with ‘Thriller’. Of course, we all know there were wonderful albums before that, going back to Frank Sinatra and Miles Davis. And fine albums after that period too. This book is not about that. Taking its title from Roxy Music’s “Do The Strand” (on ‘For Your Pleasure’, 1973), this book is less a history of individual vinyl long-players, as about the cultural significance of the iconic twelve-inch itself, across a time when it was at its most pre-eminent. Those ‘Golden Years’ when the LP ruled the world virtually unopposed. Admit it, you’ve got a box of them gathering dust in the attic. Or maybe you’ve even got that Boho retro-chic thing of having the turntable placed alongside the router in the front-room?

Oddly, the book-jacket photo shows a tousled hip young Bob Dylan in shades listening to a long-player on his portable, a photo probably taken in 1965 or 1966 at a push. But we get the message, this is a game-changer moment, for a generation to whom the phrase ‘Laminated With Clarifoil’ promises a Magic Carpet Ride of sonic thrills, and he’s the Social Influencer, writ large. Of course, since the advent of microgroove and the Dansette portable there had been stand-out albums, but largely Pop LPs were poor-value concoctions cobbled together, a lead hit single opening each side, plus B-sides and a bunch of fillers. An album generally consists of twelve songs, sometimes ten or even as many as fourteen. It has a duration of around the 45-minute mark, but can be less. And anything more tends to lose focus and listener attention. It’s fair to say that from the advent of the ‘Please Please Me’ LP in 1963 the Beatles always offered contrastingly good value, and – as ‘children of Buddy Holly’, they ‘didn’t have the patience that’s required to make something boring.’

Hepworth is good on the shared generational ritual of how we had to leave the house, catch the bus down to the city centre, do the circuit of a favourite record stores – for me, Sydney Scarborough beneath the Town Hall, Gough & Davy down Whitefriargate, flipping through the album-boxes, and – with limited income, agonising over which of two vital vinyls to commit to. Maybe erring towards the familiar name rather than punting a chance on the luring exoticism of the unknown. Both an adventure, and an expedition into otherness, rather than simply accessing iTunes from wherever you happen to be.

The rise of the LP, Hepworth asserts, parallels the rise of higher education, as baby-boomers went to college. The single was for Pop kids. The album was a graduation from short-form to long-form. And strange to relate, most of what was happening in the albums market back then was happening for the first time. There was no precedent. But ‘nobody put anything away for posterity, because there was no sense that posterity would have any interest.’ Around his ‘Sometime In New York City’ (June 1972) double-set John Lennon conceived the idea of releasing records as a counter-culture information service, ‘show me an issue and I’ll write a song about it.’ It didn’t necessarily lead to memorable tracks, but in a sense that’s exactly what the LP became. New albums, Hepworth says, were treated ‘much as new novels had always been,’ people found in Leonard Cohen albums what an earlier generation had found in their dog-eared copies of Jack Kerouac – only more so, as novels are regularly republished inside different cover-designs, while ‘Sgt Pepper’ looks exactly the same today as it did the day Kenny Everett first played it on his BBC Light Programme Saturday afternoon show in 1967.

Albums define social status and tribal prestige, declaring life-style choices. When I bought the Sex Pistols ‘Never Mind The Bollocks’ (October 1977) and carried it conspicuously through Wakefield city-centre, deliberately dumping the HMV-branded bag, it was more than just a consumer acquisition, it was declaring allegiances in a culture-war. Isn’t that how Mick Jagger linked up with Keith Richard on Dartford Rail Station platform, by recognising the Chuck Berry and Muddy Waters albums they carried?

1971 Hepworth claims, was ‘the annus mirabilis’ with such a wealth of new music, tracked through closely-scrutinised reviews in the music magazines, the underground press or the secretive code of fanzines. ‘At the time these records first came out there was simply too much that was going on in the moment and the media couldn’t keep up,’ so that it took years, and even decades for audiences to catch up with neglected curios and overlooked oddities, maybe in new CD special editions or curated collectors anthologies. He doesn’t mention the thriving second-hand sector, like ‘Sheridans’ on Hessle Road in Hull, where it was possible to pick up pre-loved albums, carefully scanning them for abrasions… well, the scratch only extends across track four, and that’s just about an acceptable trade-off. Yet each scratch is ‘a minor bruise to the heart. All the Emitex in the world could not buff that bruise.’

It’s oft forgotten that there was a market for comedy albums too – the Two Ronnies, Monty Python, Derek & Clive, Billy Connolly… Cheech & Chong, because it was ‘the first form of home entertainment that could be replayed on demand.’ And movie soundtracks that seemed to hog the top of the chart for unfeasible forevers, ‘The Sound Of Music’, ‘South Pacific’ – ‘Grease’ and ‘Saturday Night Fever’.

It’s two-ounces of plastic with a hole in the middle, maybe, but each album is also about surfaces as much as it is about the music-grooves it sleeves, which is why he devotes so much text to iconic cover-art. Hipgnosis and Roger Dean, Andy Warhol’s banana for Velvet Underground, to Pink Floyd’s prism. Good reviews in the music papers crucially sell albums too. Charles Shaar Murray on Patti Smith’s ‘Horses’ (November 1975). Nick Kent on Television’s ‘Marquee Moon’ (February 1977). Some sound-geek audiophiles bought ‘Dark Side Of The Moon’ (March 1973) to test out their expensive state-of-the-art woofer-&-tweeter sound systems into ‘the pure concentrate of cool’. This is not a book about specific albums, yet some qualify for special mentions. In amongst the plethora of Rock concepts ‘the Band did something even more audacious than all of them. The Band didn’t play the old songs at all. The Band wrote their own old songs.’ He also commends ‘Court And Spark’ from Joni Mitchell and Randy Newman’s ‘Good Old Boys’, both from 1974.

A spin-off hit single is a useful promotional tool, although ‘Tubular Bells’ (May 1973) managed perfectly well without one. Led Zeppelin may have been mainstream Rock, but it was music you never heard on the radio or ever saw on ‘Top Of The Pops’. If you wanted to be into it, you had to buy the record. Although I did manage to pick up a 45-rpm single of “Communication Breakdown” on a day-trip to Calais. But among the Progressive Rock innovators, it was Giorgio Morodor who also rewrote the rulebook with Donna Summer’s sixteen-minute “Love To Love You Baby” in 1975. Until ‘simply referring to ‘putting on a Barry White album’ came to stand for an entire repertoire of foreplay.’ And the Bee Gees solved the problem Morodor had faced when they use one bar of the drum-track tape-looped into repetition in preference to a real-life drummer for “Stayin’ Alive” – establishing the endless machine-rhythm of future-Dance.

Hepworth explores the indefinable mystic alchemy provided by the Producer in interfacing tatterdemalion street-wise musicians with studio high-tech. The indulgences of sprawling studio experimentation versus sharply well-rehearsed disciplined sessions. The chemistry – and the various chemicals involved. But as the years tick by like tracks on a double-album, Rock stars become brands, with lengthening shelf-life. The Eagles and Fleetwood Mac sell entire landfills full of shiny black plastic. There’s lavish indulgence ‘on a scale that would have been familiar to a courtier at Versailles,’ as ‘Tusk’ (October 1979) follows ‘Rumours’ (February 1977). And ‘The Wall’ (November 1979) follows ‘Dark Side Of The Moon’. Teenage kicks extend into mid-life loyalties. Show-biz consolidates into the Music Industry. There are livings to be made in the margins and niches.

1980 was the year John Lennon was shot dead, and the year Ian Curtis hanged himself. Making Joy Division’s ‘Closer’ ‘the original and also the ultimate Indie album… it sounds like the future that never arrived and a past that never took place.’ Until the paradigm shift of ‘Thriller’ neatly book-ends Hepworth’s thesis, not only the biggest-selling album of all time, but an artist who transcends race, gender and genre into the immaculate product synthesis.

‘Music is just as popular now as it was in the days of Michael Jackson or Enrico Caruso’ says David Hepworth, ‘what changes is the way we consume it.’ By then there was the insinuation of C30, C60, C90 cassettes into the vinyl-only game in town. The Sony Walkman untethered music into mobile ‘Private Music and Public Silence’. MTV usurped the image until ‘the album became an audio momento of a visual experience rather than an entertainment in itself.’ Indie labels led to a fragmenting Balkanization of Pop. Hip-Hop and 120bpm. Then CD – the first, in August 1982, was Abba’s ‘The Visitors’, the first million-seller, Dire Straits’ ‘Brothers In Arms’ (May 1985). Facilitating downloading and streaming. But during their ‘Golden Years’ albums were never just a bunch of songs sequenced across two sides of plastic, they were serious art-objects targeted at adult audiences, promoted through ‘Old Grey Whistle Test’ – for which Hepworth served his time as presenter. He knows whereof he speaks, and delivers in easily-digested anecdote-strewn authority.

No ‘Piper At The Gates Of Dawn’.

View all posts by Andrew →
This entry was posted on 6 July, 2019 in homepage and tagged Andrew Darlington. Bookmark the permalink.