HITLER IN A PONYTAIL 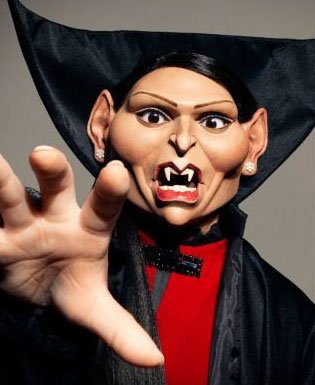 Its impossible to believe that we live in a world where Priti Patel
Makes decisions, but perhaps they thought that in all cities
Where miniature despots held sway. Cambodia. Germany. Chile,
And now, Grating Britain, where this female bastard revives
Each refugee’s ruined day. Under the cover of darkness, intent
And as far as we know direct evil she can bite out the British
From those who have sought sanctuary, whilst hearing a jingoist’s bell,
This toll tells a black story, in which freedom’s fairytale sours,
And where prospective Cinderellas are servants deprived
Of the chance to feel free. I have written too much
About this bitch as blight and so I risk repetition, but what’s worse
Is her knowledge of how she is seen and perceived and how
It doesn’t seem to affect her one jot: she spits out her plots.
Her sneer is set. But I’d smear it. Destroying the pose that’s presented
And by which the rest of us are deceived. You have to be
Ransacked within to crest those stark waves of hatred.
You have to be so hurt and so damaged to enjoy such revenge.
She is Lucy Ewing writ large; Dallas’ poisoned dwarf in Westminster,
Spilling her spite ripe with relish as she secretly steals citizens.
Patel bites the Queen, or what Elizabeth represents, or, represented
Priti is the first syllable within country that she now proports
To defend. But this isn’t defence; this is Eva Braun in exelcis,
As would be consort and Fuhrer, but bleached of appeal she’s all ends.
That a man married her and lives with her now says something
Not about who she is. I can’t say that. But this is about what she does.
Or is prepared to do. Or to be. Her psyche is sick, that’s for certain.
While we, the infected, in letting this loose bleat and buzz.
But it should be her for exile and the chop; let’s bundle her
Onto the boat headed towards her idiotically infamous fantasy Island
Where she can rage at a rockface and command coconuts
If I was the sea, I’d shipwreck her while she’s swimming.
If I was the sky I’d storm on her.  If I was paste she’d be cut.
Because of what she  is happy to do. This poem is not an agenda.
But Un-Priti Pudenda, I want to know how you sleep.
What brings you happiness? The fascistic chorale you’re conducting,
Or some high plain where Bore-is, and if you are able to have friends
Cavort while we weep. You represent where we are, and what it is
We’re becoming. You are the horror, the Apocalypse now, riding in.
It isn’t four horses at all. Its just one poisoned pony. You want
To remove others freedoms without any warning at all. Is that sin?
David Erdos 19/11/21
Tweet
more

View all posts by David →
This entry was posted on 20 November, 2021 in homepage. Bookmark the permalink.