Posted on 7 November, 2020 by Rupert Loydell 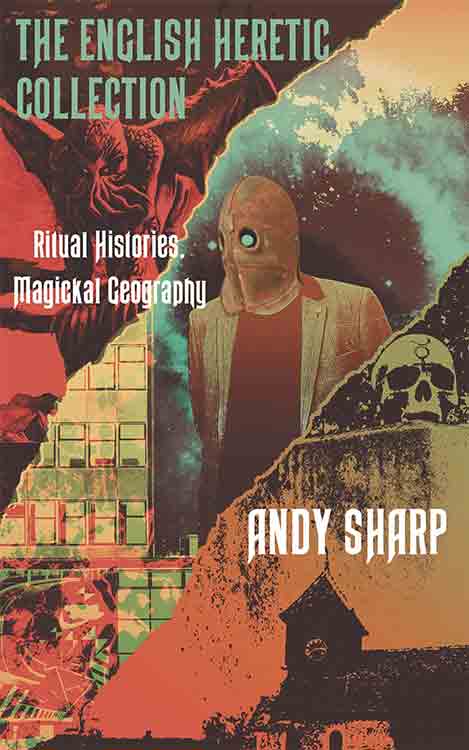 I’m all for associative and tangential writing in creative non-fiction. Iain Sinclair has made a career out of it: his take on Hawksmoor’s churches combines history, ghost stories, ley lines, Egyptology and Jack the Ripper into a brilliant scarey psychogeographical yarn. But sometimes this kind of writing (and I don’t blame Sinclair) can simply go too far.

Andy Sharp’s book is a disorderly and uninformed affair, a combination of information, disinformation, misinformation, delusion and fancy. Anything that resisted English Heritage’s commodification and exploitation of the past and explored Britain’s geographical and literary landscape was to be welcomed, I thought as I requested a review copy of The English Heretic Collection.

Take the Ballard section for instance. Ballard was interested in surrealism and used many of the movement’s techniques to construct his enigmatic stories and novels. Sharp contrives to mention Frued, then Jung in relation to Ballard’s work (pretty much in passing), then James Hillman, before performing a sleight of hand in relation to a Ballard quote, suggesting that ‘deep assignments run through all our lives: there are no coincidences’ is an occult utterance rather than a rational take which resists the magical and notion of synchronicity and coincidence!

In a similar way Ballard’s perceptive reading of suburbia and its inhabitants is declared ‘prophetic’, which allows Sharp to jump to Princess Diana’s body being returned to Northolt Airport, followed by a casual namecheck for Nostradamus. A page later we have Austin Spare, Kenneth Grant and John Dee in the mix, along with ‘diseased refractions of the Qabilistic Tree of Life’. I put it to Sharp that this kind of mystical tourism would have been anathema to Ballard, who was interested in deconstructing contemporary society and the way we live, not magical theories and processes.

Sharp performs similar feats of sidestepping throughout the book. A section entitled ‘Inside the Mausoleum’ starts promisingly enough with a visit to the de Grey Mausoleum in Flitton, Bedfordshire. Using a cultural shorthand to describe the mausoleum Sharp mentions the cover of Joy Division’s Closer LP before digressing to recall the day he bought the album, remembering that the Egyptian president Sadat was assassinated the same day. Fair enough, but this is then recast as ‘[a]n overexposed death rite of the Pharoah caught on camera’.

Earlier he describes the inside of the tomb as ‘a baroque version of John Lilly’s isolation tank (no, I have no idea either), interior design by Peter Saville’. Fair enough, except that Peter Saville was a minimalist graphic artist, and a quick Google image shows that the de Grey Mausoleum is indeed baroque, and purely baroque.

But I interrupt myself. Following the Egyptian aside, Sharp leaves Flitton for nearby Clophill graveyard, which is not only ‘a Satanic hotspot’ but also has a ‘history carved into Gothic folkore’. Spooky stuff indeed, but why did we go to Flitton? Anyway, Satanic rituals allows Sharp to mention Dennis Wheatley and the band UK Decay who he repositions as a goth band instead of the tired punk they actually were. I mean a couple of websites mention post-punk, but i think that is simply because the band arrived late…

Apparently the graveyard and mausoleum are part of an ‘underworld heritage’ which for some reason gets us to Primo Levi and also to Malcolm Lowry and volcanoes, thence to LSD and drinking in churches, then to the Situationist International, and on to ‘Christian alchemy’ and pyramids, with a nod to ‘Celtic troubadour’ John Cale, ‘lysergic troubadour’ Julian Cope’s megalithomania and the surrealist artist Paul Delvaux who he recasts as a shaman. Now, Sharp breathlessly proclaims, we have been offered ‘a rich and cryptic map to navigate our native underworld’ if we wish to ‘return to our own island of the dead’. No, you’re OK, I think I’ll stay here for the moment.

To be honest I need a headache pill and a lie down after a few pages of this nonsense. The press release asks ‘if history is revealed as a paranoid ritual, how do we escape its time traps to wild, new and imaginative geographies?’ and truth be told I have no idea. But this rambling new age hodgepodge of 70s occulture is not the answer. Rather than being a ‘mental escape hatch from the hells of our own making’  this book feels very much like a hell of Sharp’s making, a dense labyrinthine metatext of confusion and delusion, entirely divorced from reality, however unpleasant that reality may sometimes be. 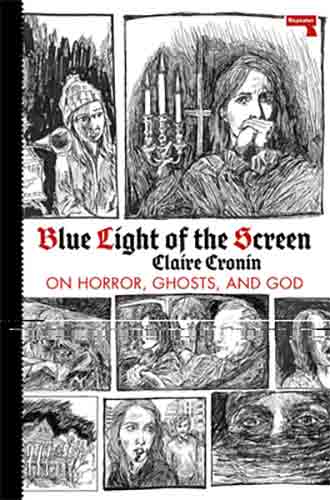 Claire Cronin’s book was an unexpected surprise accompanying Sharp’s book. Inside one of the worst cover designs I have ever seen (the appalling drawings occur throughout the book; thankfully the gothic lettering does not) is an exploration of obsession waiting to get out. Truth be told, this book reads like notes towards an essay – it desperately needs shaping, editing and rewriting; and most of all needs to coherently discuss the films Cronin mentions, and the religious concepts that are alluded to, but most of all to look outwards and be rational.

As it stands The Blue Light of the Screen is a diaristic meander, a dream memoir of hauntings, ghosts and childhood, delusion and psychosis. Occasionally Cronin starts to discuss film using ideas from the likes of Marshall McLuhan, but these discussions are quickly swept aside to be replaced by feelings and emotion. This is an obsessional, egostistical nightmare of a book, a shapeshifting gothic narrative that after 200+ pages delivers the reader back to where they started, none the wiser but wondering what on earth they have just read. And why.

View all posts by Rupert →
This entry was posted on 7 November, 2020 in homepage and tagged Andy Sharp, Magickal Geography, Rupert Loydell, The Blue Light of the Screen, The English Heretic Collection. Ritual Histories. Bookmark the permalink.