How He Wrote Us into Existence – A Fiction 17 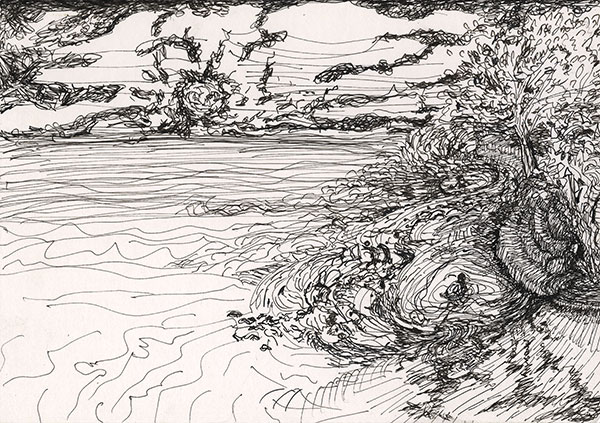 “Always one protagonist overshadows the others sometime with his light, sometimes with his darkness, more than often with his penumbra.” My uncle says, “Which one runs this account? You? The Poet?”

I ignore them both. There is no story. I desire to scream. I want to wake up.

The muffled street drums the win of some leader prewritten to win by the invisible potentate or perhaps it is one single car run by a municipality driver announcing about the latest on the pandemic. Here nothing matters more than an electronic fan riddling the heatwave into a shattered-mirror puzzle; I listen to the fan; years ago the doctors drilled a hole into the throat of my caught-in-cancer aunt, and she used to talk about dying old and the subtexts of all other malisons in her an electronic fan slashing summer again and again voice.

Mid-day, I hark the noise-puzzle. “Who won?” Prisha asks. I shake my head, “The fan repeats its battle in the same circle, because…”

Because of our births, because our orbits chanced our genesis.

The knife I found yesterday in the house’s basement should shine the moment I shall open the drawer. I keep it in the second one of my study table where I do not study, and instead of papers or books, a messy array of products used or intended to be used, but never got a chance, displays the growth of time as a fine daughter. Prisha knows about its existence. She is the one who found it during the search for the creatures of those surreal eggs. She did not pick it up but merely dragged me gently when everyone else hovered over the fragile orange right winged fledglings. The knife was hidden inside a book about the sexual habits of the insects. No one would have opened the book in any other circumstances, but it was hidden in haste, with some thoughts that now perceived by us, the observers and recipients, as undernourished.

Right now, I think the knife is a page-mark, a joke only my uncle can perceive appropriate, or (I tremble) even a clue to another elaborate surprise or mystery or even a crime.

This has been a year of our democratic election and a year of the pandemic that, on my worse days, frightens me if we have committed a sin by bringing Elora into a world withering away. A year we have begun to learn the tongue of the cats, met a poet who wanted to be enchained in our basement and helped hatched right winged birds. I miss the dead uncle annotating my life.

Still, the surprise is an emotion that embraces me.

I ask Prisha if we should clean the blade. “Whose side of the story are you watching in those TV shows?” she asks.

Can one clean up an act? Perhaps, Prisha points out, an act cleanses another.

Someday you cease to be conscious of the days being deleted from your account, that you have only a dwindling number of those left, and that day you, although unknowingly, find the rhythm of the mundane much appreciated by the zen philosophy. I must have crossed that day, and because of the very effect of that blessing of oblivion, I have forgotten about the bliss.

If I have written down the days after that day of acceptance the days as they are, the readers will ask, “Do you think we are simpletons? The banality of life is fine, but you cannot offer a story without an edge. Not everything is nice. It cannot be. You have no money, and you have been reared to not to act out of bound in search of a little bit of capital, but is not there a knife hidden in your closet, one thirty of some blood?”

Not in the closet, I should whisper, in my table’s second drawer, and the knife was used by my grandfatherly rounded off uncle as a bookmark. The existence of the knife suddenly saws off the fat of contentedness.

I feel the edge of poverty again. Again, I desire to infract the rules I let my life follow. Beg. Kill. Get the life your family deserves.

Our house is surrounded by disturbed domestic arrangements. The last time we gathered around the kitchen table and talked about the old days we brought up the abuses we witnessed. Where do our neighbors hide their knives?

Well, a knife can tool mundane routine chores; the blade can outrun the longevity of its sharpness through slicing and dicing vegetables or meat; lesser than human beings can be sacrificed availing its edge. Does not the very fact that we think about a crime or a trespass in the arena of grey represent our will to commit an act of aggression?

Poor, innocent uncle. We are the ones who imagine a crime to quell our own perversion.

My thoughts turn to the book, the one on the sexuality and mating of the insects. My uncle used to lead a lonesome life towards the end, if you neglect to consider our visits, books and casseroles. The death of my aunt happened before I began visiting my uncle at the assistance of Prisha; I remember her words, “You cannot detach yourself from your kin, and then expect the same will not occur in your life.” Her words gave us a roof above our heads when I lost my interest to work, exorcised the panic attack, and decided that we should wait and see what materialized to us, and Elora bloomed.

I descend downstairs, see the poet writing something using his laptop, give him a nod, say that today our household will wake up to the daily routine late, receive his approval in the form of a shrug, and fetch the book which held the knife in its bust.

I and Prisha open the book. The first page, the Title page, is missing. The content page as well. We assume the title will be something like ‘The Mating Rituals of The Insects’ or ‘The Sexual Habits of The Insects’. Prisha giggles, “It can be ‘The Bugging Urges’.” I agree that would be hilarious.

“Can you recall which pages were marked by the knife?” I ask.

We drift into the devouring mates. Prisha asks about my aunt, and I realize that my knowledge about any of my kin limits itself in the memories of sparse interactions between me and them. You can say, safely, I am a self-centered person.

I can hear the cat and the kittens. They have returned to someplace inside the house. I can hear Elora’s delight. The drums of democracy and sirens for the dead ones continue in the milieu. And an old-fashioned postcard falls from the book.

The handwriting is legible enough –

We found those two tourists. The Austrians, I told you about. They said –

“The guide, Sam, shows us the tree, and if you query which tree it may be, he says, the lynching tree; its boughs bear the fruits in arbitrary seasons; those drupes look almost like you and me; their heads droop a little like the half-open jackknives; the scent of ripening reminds you of the morgue or the sweaty shivering body of one grieving widow who disappears after lodging a complaint against a local baron. We click a few snapshots and, although nobody hangs from the tree presently, the photos reveal one – his dark skin contrasts with the mean daylight on every detail of the village, houses, ruins, political slogans written on the walls, tobacco juice spit against the wordings.”

And then they were lost in the vast village of this country. However, now that we have found them, we must endure a lot of paperwork and headaches.

View all posts by Kushal →
This entry was posted on 9 October, 2021 in homepage and tagged Kushal Poddar, nick victor. Bookmark the permalink.