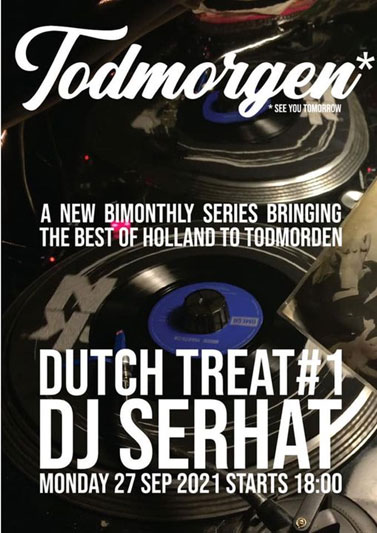 TODMORGEN – Dutch for ‘See you Tomorrow’- is a new series of bi-monthly events bringing over Dutch night-delights to the Golden Lion in Todmorden in West Yorkshire’s Upper Calderdale Valley. Gig, from the Golden Lion with Serhat at the decks.
DUTCH TREAT#1: DJ SERHAT

Born in Istanbul, Serhat, is the offspring from a legendary 1970s’ bombshell actress mom. He was raised as a teenager on the moist clay grounds of Groningen in the Northern Dutch lowlands. After having quit his day-job as Heineken Brewery’s prime chemist, the Amsterdam-based, dj SERHAT (Serhat Oguz) has dedicated his new found life to his long-time love for rare vinyl. He has assembled one of the largest collections of rare and obscure vinyl records in Amsterdam city.
Serhat has been resident dj of legendary Amsterdam r&r venues Pacific Parc and Café De Diepte and most recent the notorious SailorBar, Vreniging de Steek, Roze Tanker, and Maloe Melo.
Dj SERHAT keeps spinning his vintage vinyl tunes ranging from Northern Soul, to Belgian Popcorn, and from Punk rock to Exotica and beyond. His aim? To entertain and surprise his audiences!

Listen in on Alan Dearling and Serhat Oguz talking music, the Netherlands and Turkey 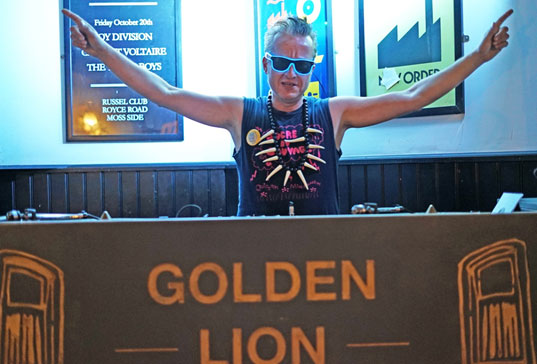 Alan: A great, eclectic, musical feast. Many thanks for sharing some of your passion and music with the Golden Lion punters. And quite a journey for you, flying in specially from Amsterdam. Tell me a bit about your musical journey from Istanbul to Amsterdam.

Serhat: Thanks. I will briefly introduce myself and my musical journey.

It’s a great pleasure to be here in the Golden Lion in Todmorden as a dj. 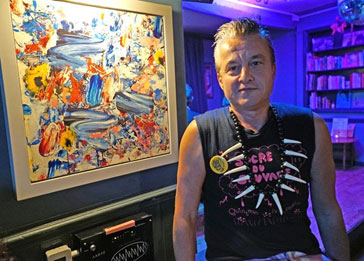 I grew up in Istanbul in the 70s and 80s. My mother has been a legendary movie star in the end of the 60s and the early 70s in Istanbul. She actually comes from Greek-Roman (Byzantium) ancestors back from the time when Istanbul was called Constantinpoli. In contrast, my father was quarter Italian (Verona), a quarter Albanian, and half Turkish. I grew up with different cultural habits and music genres, and lived in the Asian side of Istanbul until age of 7 and later moved to the European side of Istanbul.
When my mother was a movie star, we also had several artists at our house such as Cem Karaca. He was my father’s best friend. Cem Karaca (April 5, 1945 – February 8, 2004) was a prominent Turkish rock musician and one of the most important figures in the Anatolian rock movement. He was also lead singer of the famous progressive, psychedelic rock band from Istanbul. Moğollar (Mongols in Turkish) was one of the pioneering bands in Turkish rock music during their early career and one of the founders of Turkish folk rock (or Anatolian rock).
Alan: I had a home in Kalkan for over ten years and worked quite often with authors and musicians in Istanbul. I’ve been lucky to collect over a hundred Turkish albums, including ones with Cem Karaca and Moğollar: Here are a couple of musical links. Cem always looked like a complete gentleman, Hippy-Freak!

Serhat: In the 1970s, Turkey was dealing with political violence between supporters of the left and the right, separatist movements and the rise of Islamism. As the country fell into chaos we moved to Netherlands in the mid-80s.

In Amsterdam I have been a very active underground music listener, dj, and the promoter of rare genres of music bands until now.

I have been interested in music genres and cultural influences of music all my life. I must say I haven’t been a dj for a very long time. But I am a music collector and especially a seeker of weird vintage vinyl. To give a short example, lately I have become interested in Surinamese-Hindustani music from the Netherlands from the 80s, it has its own style with synthesizer and crazy beats with beautiful melodies.

Alan: You seem to mix – almost seamlessly – music from different eras, cultures and countries. For example, it spans 1920s Hot Club of Paris through to Turkish house music. But it seems to blend together beautifully…

Serhat: Thank you Alan for that, I have indeed been trying to mix a lot of broad music genres lately. I also see that we live in times of mixed cultures and societies and I also try to let young people and old people enjoy mixing styles of music.

Alan: You obviously sensed that this was an early-hours audience, but you were ‘playful’ with them, both visually with your image and the juxtapositions of sounds.

Serhat: Indeed I started spinning quite early, and slowly tried to give the audience a little bit of a theatre feeling and to see a smile or two. Also to loosen up a bit. At the end of the evening, there were even a few men who started to dress up as women etc… On the dance floor, there was dancing of burlesque-kind of 50s, and music instrumental rock and roll with elephant sounds from a saxophone…

Alan: What is going on in the Dutch club scene at the moment? Are there clear styles and types of music that are especially popular? Mercan Dede is well worth listening to. I’ve certainly enjoyed the CDs that I’ve bought. But this is an artist who is crossing over to work with djs too. Here we see a performance at the Paradiso in Amsterdam with Azam Ali, complete with a red whirling dervish:

Serhat: Nowadays I see a lot of young people who get interested in world music of all kinds. A lot of music is made with contemporary sounds. An example I can give is the band

Altin Gün. They are an Anatolian rock band from Amsterdam, Netherlands. Their style has been described as ‘psychedelic’ with a ‘dirty’ blend of funk rhythms, wah-wah guitars and analogue organs. Altın Gün also performs psychedelic rock covers of Turkish folk music.

Hear some of their music: https://www.youtube.com/watch?v=FyQ_5uLyFMo 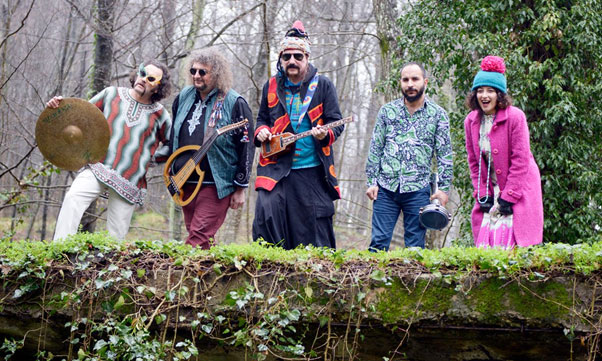 Alan: I’ve worked at EDM festivals like OZORA in Hungary and Boom in Portugal – I met up again with BaBa ZuLa at OZORA who are a major live band who I first met in Istanbul. They seem to also mix traditional Turkish sounds and instruments with dance vibes. Are they an outfit that you have worked with? 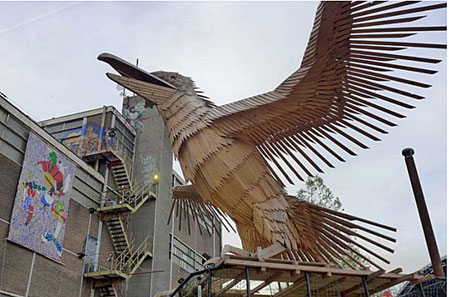 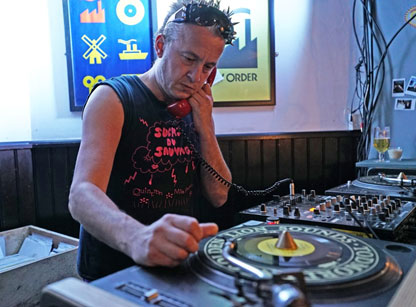 Serhat: BaBa ZuLa…….I love it. Great music …….BaBa ZuLa create a unique psychedelic sound, combining traditional Turkish instruments, electronica, reggae, and dub. The core of their sound is the saz, a Turkish bouzouki-like stringed instrument with a bright, high-pitched sound. They use a revolutionary approach to electric saz, combining it both with retro and high-end electronic effects that creates an original sound never heard before until now.

Alan: In the Netherlands I’m close friends with many members of the Cultural Line of Defence – part of the alternative spaces and squatting movement. I was first friends with members of the Amsterdam Balloon Company who squatted Ruigoord. Some are still involved with that arts space outside Amsterdam and places like ADM, and festies like Landjuweel. Sadly, ADM was evicted but some ADM folk are resurrecting the events at the Sludge Fields. Is this a scene that you are involved with?

Serhat: How nice Alan that you also know the ADM family. I’ve been there from the beginning and even helped organise festivals like Robodock several times.
Robodock was an Amsterdam multi-day festival that was held between 1998 and 2012. The festival connected technology with art and showcased various disciplines including theatre, visual arts, music, film, industrial installations and technical experiments.

Alan: You seem equally comfortable playing film scores, jazz and ethnic and contemporary sounds from Africa, the Mediterranean and South America. Do you very actively search out vinyl music from around the world? What are some of your absolute favourites?

Serhat: I am an extreme music collector mainly vinyl and 45 rpm is my specialty.
I find it difficult to answer what my favourite is because I have a very wide range of tastes in genres.
It can be a country song about Japanese cheese or a Scottish singer who yodels an old Turkish song like Uskudara

Alan: How did you meet up with Gig from the Golden Lion?

Serhat: Walter Russell (Artist) is an artist and a good friend of mine and he introduced me to Gig and she invited me to come and DJ sometime and here I am!

Alan: Can you see ways that the alternative scenes and people from the Netherlands, or, even Turkey can organise more link-ups and events with Todmorden and the UK?

Serhat: I really met lots of friendly and nice beautiful people in Golden Lion, the Todmorgen event, and around Todmorden. I see a lot of possibilities of exchange projects with artists, djs and bands.
Thank you so much Alan for the great interview and really liked that you came by and took pictures and enjoyed the music. Thank you and see you soon either in Todmorden or in Amsterdam.

Alan: Many thanks for sharing your time with me and your new friends in the ‘family’ in Tod! 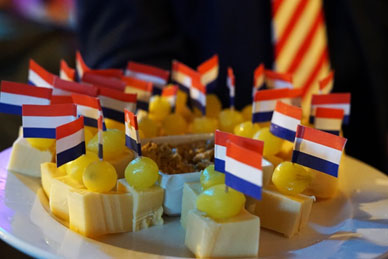 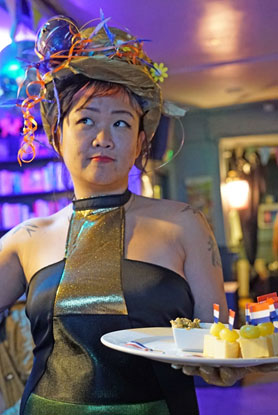 Tweet
This entry was posted on 9 October, 2021 in homepage and tagged Alan Dearling, Serhat Oguz. Bookmark the permalink.