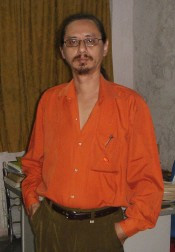 Write me down, I am dialectic

Read me out, I am dialectic

In the news of ‘Not a mermaid! It’s just a dolphin!’

I happen to be a trawl net

I’s bridge between the poetics

Of the senses and the poetics of the language

Fragments of I’s and I’s

This is no I-centric romantic lyricism

This is no sunning the sores of confessional poetry

Haven’t I taken it for the illusion of self

Man is a little bundle of contradictions

I sense with language

In the spectrums of language

There are more than seven colours of I’s

Between the two I’s

There are I’s who amount to nothing

There are I’s, neither fish nor fowl

I’s, no fisherman is able to catch

I’s, swimming against the tide of fish

I died of heart attack

Another I died of A I D S

Another I, of cerebral haemorrhage

Another I, of throat cancer

Another I, of Alzheimer disease

My bag of bones I thought was my home

All that glistens is something that glitters

I am not gold however

I go on a vacation on a fancy bohemian beach

My feet do not look peasantry

My hands do not look proletariat

Tell me, why should I be embarrassed about it

A warm-blooded animal I am

My bloods do not represent people

My mammalian heart just beats with

The conscience of a subaltern sympathizer

Not lucid, but from the seemingly lucid fields of linguistics

They’ve set me up against I’s who are

I am not a proposition

I am not a counter-proposition

Like you, I have no less the value of an average human

Which ‘I’ of mine goes to bed first in the evenings

Which ‘I’ of mine gets up first in the mornings

Day in day out, I meet up with

A little marionette of mind, with tangled strings, and

With a machinelike penchant that calls for focus, while

Faced with the chainsaw of daily loka

What figure of speech was that

Another ‘I’ takes shelter in

The emptied shell of an old ‘I’ and

Gawks at me from the dark

What I know I know is a grassland

Where not a firm shady tree grows

Only ants, moths, termites, snakes and scorpions, branded under

trustworthy ethical standards, thrive with the inner self that

Pets on the fat roll of a nape

I’ve always been a standing passenger

On the classified file of sentiments, I see the high sign,

‘No Trespassing,’ into the privileged pleasures

Not that I want to express my pains

Yet the flesh and blood of pain

You can read me ideologically if you will

I am not thesis

I am not antithesis

Patched up in palimpsest.

Translated from the Burmese by ko ko thett.

Note: loka = the material and immaterial world as we experience it.

Tweet
Tweet
This entry was posted on 4 May, 2012 in homepage, Uncategorized and tagged 'the guru', Burmese poetry, I am Dialectic, Ko Ko Thett, Zeyar Lynn. Bookmark the permalink.