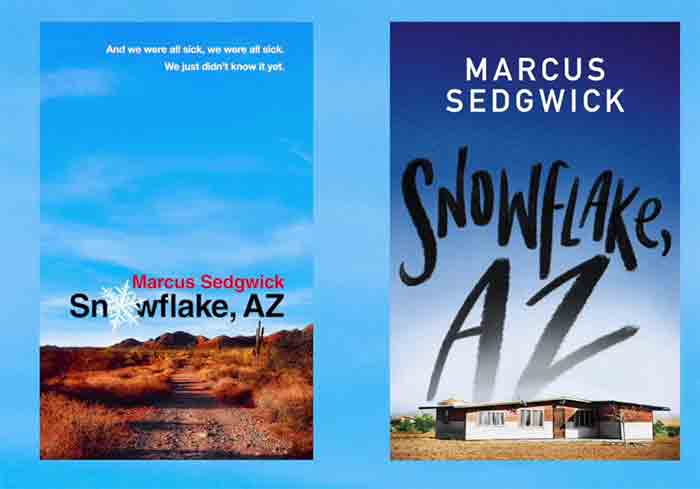 Marcus Sedgwick is a brilliant and prolific novelist. Although his works are mostly classified and marketed as books for children or young adults, he is a writer who transcends these kinds of boundaries and simply writes good books.

I recently reread Saint Death, a novel about a teenage boy’s life in Mexico, across the border from the USA. It’s also about friendship, gangs, violence, big business, patriotism and nationality; it makes you think without preaching or smacking you around the head, which is what good books do. A previous book, Ghosts of Heaven uses a motif of the spirals across four times and scenarios, to discuss mankind’s development. Among the cave women, space travellers and mental asylum inmates, there are intertextual asides which reference the likes of 2001: A Space Odyssey and DNA research; like Saint Death, the book is full of engaging characters and engrossing scenarios.

Unfortunately Sedgwick’s new book, Snowflake, AZ, isn’t. Instead, it’s a polemical novel about Multiple Chemical Sensitivity (MCS), a disease where people react to the modern world around them – electricity, plastics, scents and pesticides, etc . All well and good, especially when placed within the real world scenario of a community of those suffering from MCS in the Arizona desert. The book is full of info-dumps: lectures and opinion, delivered by the few characters in this book.

Actually, by the end of the book I’d simply started to agree with the doctor who occasionally appears and tells Ash, the main character, that there is nothing wrong with him. Ash gradually becomes more self-righteous, indignant and annoying as the book goes on, as do the gurus and all-knowing ex-academics that mostly constitute the community who inhabit the cluster of tinfoil-lined and chemical-free dwellings miles from nowhere.

One thing that annoyed me even more was the fact that these sensitive souls, allergic and paranoid about everything, continue to take fluoxetine and are not allergic to dogs or goats. Personally I know far more people allergic to animals than to electricity or plastic, and as someone who has received medication for depression I know all too well the side effects and addictive properties of fluoxetine!

Rooted in the author’s own struggle with Chronic Fatigue Syndrome (often known as ME), an illness many deny exists, the book is clearly well-intentioned and personally inspired. Unfortunately, that doesn’t mean it’s a good book. Sedgwick’s nods to Noam Chomsky (Mona, the name of the wise woman at the Snowflake community, is an anagram of Noam), Voltaire and Thomas Mann, do little to help this book escape being a turgid diatribe, a finger-wagging scaremongering sermon which however right it may or may not be, is simply a bloody annoying read and a disappointing novel.

View all posts by Rupert →
This entry was posted on 10 August, 2019 in homepage and tagged Rupert Loydell. Bookmark the permalink.