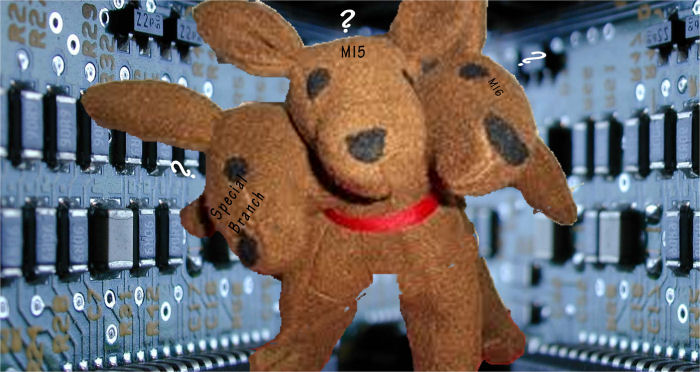 ‘Intelligence services are prone to looking up their own arses and then wondering why it is so dark’.

The word intelligence seems to indicate perhaps the highest faculty of the human mind. However, when applied to the governmental ‘intelligence services’ a somewhat more limited ability is exposed.

The two branches of the governmental intelligence ‘mind’ are MI6 and MI5 – In general the criteria for membership of MI6 is schooling preferably at Eton (or a similar elite establishment), and thereafter Oxbridge.They then become members of the most exclusive London clubs where the various departments are able to share their secrets in secure surroundings.

MI5 on the other hand recruits its fellows from ex-police inspectors; senior detective inspectors; middle-ranking military police/ intelligence, and even the working classes, these two branches of ‘intelligence’ do not mix socially. An MI6 operative would thus never invite a member of MI5 to his ‘gentlemen’s’ club for a drink; neither would he meet up at a pub with a beer-swilling lout from MI5. Thus is introduced an ignorant and bigoted concept – Class, dividing this ‘intelligence’ mind down its bi-polar middle.

Take the case of Kim Philby, master spy who flourished from the late thirties until exposed in the mid-sixties. Like many of those working within MI6 his background of Eton and Cambridge were the fundamental requirements for the job – his father was the friend of his interviewer’s father at Eton, and so on. His long history of passing information to the Kremlin was the cause of literally thousands of deaths, for with the kind of information at his disposal he was able to offer the names of many Russian dissidents and agents who were supplying information to the West. These were then liquidated, together with their families (and just to be sure their closest friends too.)

After WWII the allies, in order to counter the spread of communism, sent teams of Albanian dissident expatriates eager to return to their homeland to undermine the totalitarian rule of the communist dictator Enver Hoxha. Put ashore at night by the Royal Navy, trained six-men commando teams were met by police ambushes, who knew, thanks to Philby, exactly where and when they were to arrive and thus over two hundred died in a hail of bullets. Just bad luck thought MI6 and continued sending these teams in only to be dealt with in a similar fashion.

Eventually MI5 began to get in on the act and after looking into the issue bought their suspicions onto Philby and demanded an investigation which they proposed to conduct themselves.

However, MI6 would have none of this; for it was not possible in their eyes for an English gentleman to be guilty of such treachery and so, reluctantly acknowledging that there might be a case to answer proposed to conduct it themselves. The enquiry was recorded and on hearing the results MI5 was outraged by the easy ride Philby had been given and were now even more convinced of his guilt. However, the enquiry was sufficient to bring about his suspension, causing him to spend some time in the wilderness. Eventually his friends in the service, protesting his innocence reopened the case, which brought the then Prime Minister, Harold Macmillan, (Eton, Oxford) to his feet in the house to declare him innocent and totally exonerated him. He was then reinstated in MI6 and sent under cover to the British Embassy in Beirut from where he continued supplying information to Moscow.

Finally, a high ranking official from the KGB defected to the West bringing much useful information, amongst which was an item pointing the finger irrefutably at Philby. Now MI5 had what it needed and proposed sending out one of their top investigators to interrogate him. MI6 put the block on this too and sent one of their own men to do the job. This man just happened to be Philby’s oldest friend from Eton and Cambridge who offered him an amnesty if he would disclose all the moles operating in the intelligence community. Philby admitted to all the accusations and agreed to write out his confession which would be collected a few days later by the British Embassy. The friend then flew back to London leaving Philby entirely free of surveillance, whereupon he contacted Moscow and was put aboard a Russian cargo ship and taken to Odessa, from where he was able to join his fellow defectors and Cambridge friends Mclean and Burgess in Moscow. It has been supposed that allowing him to get away was a deliberate act in order to protect MI6 from the scandal of their incompetence at the sacrifice of information on the moles who thus remained undetected and still in place.

MI5 of course would have put him straight in nick and kept him there until he spilt the beans and never mind a poncey amnesty. One wonders how many other such ghastly cock-up have occurred (and are still occurring) owing to this split down the middle of the intelligent service set up to protect the citizens (subjects) of this realm. This episode reveals the antagonism between MI5 and MI6, since it seems that MI5 regards MI6 as a load of upper class twits and wankers, while MI6 regards MI5 as a collection of ignorant beer-swilling plebs and yobboes.

There is only one diagnosis – that ‘Intelligent’ mind, set up to guard and protect the citizens (subjects) of this land is profoundly, and considering the circumstances, dangerously schizophrenic.

View all posts by David →
This entry was posted on 15 January, 2015 in homepage and tagged dave tomlin. Bookmark the permalink.