Into And Out Of The Now

Reviewing Beat the Drum’s new album, THE FUTURE IS NOW (Mind of the Artist Records, 2018) 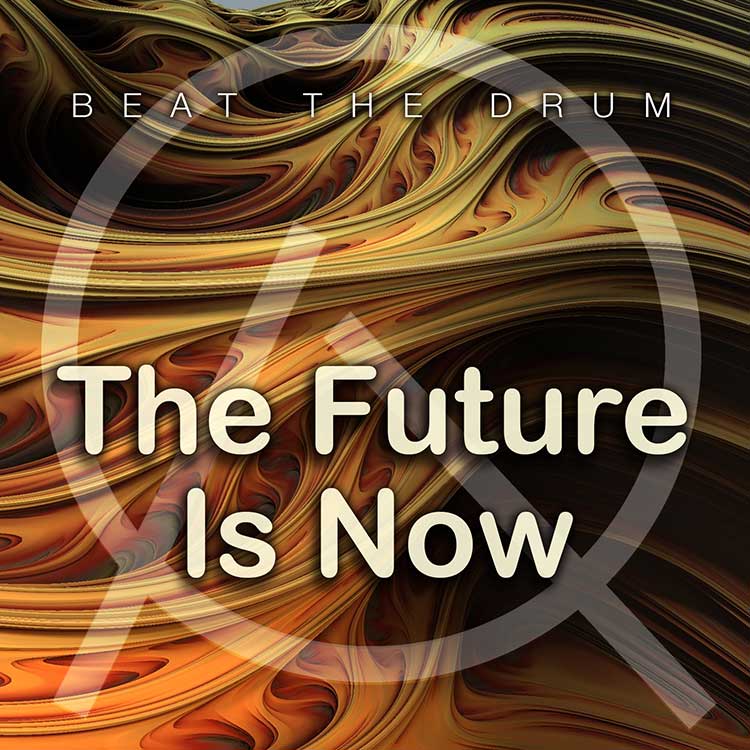 As it fades far from view the now rearranges and so it proves with this album of electro trance and dark funk. Beats marks the night, while staining the sun in high summer as this new collective makes a music of stars and blood the heart’s won. Chris Calloway and Steve Murrell are two grown men mutating the sounds and inspirations of their own earlier days to make the new future they so effectively celebrate in this collection scarred song spells. By fusing pop, trance, techno, electro and feedback fired ambiance their view is one that is as culturally rich as it is immediate and affecting.

Nine original songs and one Frank Zappa cover reveal a musculature in the music that belies their own mortal frames and allows for feelings of engagement and transcendence in the listener. Premiered in suitably classy style on a Thames moored Party boat, the album comes  with its own video feature, sistering the songs and allowing a world to be created by this duo of dynamism, which is not only the aim of all true areas of artistic practise, but also the means within which anyone connects or should connect to any thing.

The immediate future and senses and interpretations of it, as epitomised by the title, occurs in the present moment that connects and unfies us all. As it passes just as it quickly as it arrives  we are each led into our own areas of renewal and encouraged to grasp onto, express and define our own potentials and future aims, selves and endeavours. I say all this because of the industry shown by Calloway and Murrell, as artist, composers, arrangers, producers, video makers and record company they are continuing and elevating the future of creative practise as it should be understood. We are the small worlds that occur in the big one: we are the instant from which each enveloping hour is formed.

This musical futurism is evident immediately. The title track shimmers in with a mix of Massive Attack and David Sylvian, as a soothing account of domestic miasma that seeks and attains solution in the determination of a steady beat and dazzling electronic footwork. Somewhere in this cave of memory is a secret dancefloor on which the skittering stars are celebrated by the dextrous movements of the darkened inhabitants. As a Scott Walkeresque animation accompanied on screen, a plaintive call for renunciation (As I open my eyes/The future begins) develops and shows how this call and move from the dark to impending light remains crucial (The more I know/ The more I breathe).  There is a Tilt like aspect to this song, but with a lighter, more governable  sense taking shape, as if the band were encouraging the lessons of Walker’s nocturnal sermons to benefit from the acknowledgement of the gathering dawn.

This immediacy is evident in a glorious english rap  style tackling of Zappa’s I Am the Slime. The majestic brass coloured synth blasts of the chorus grant this darkness testing canter through rhythm and resonance a chance to celebrate the masters and magic of arrangement, as Uncle Frank’s cascading guitaring is hereby translated into waves of flanged and treated sound.

Where’s the Fun? Swelters in, its blackened air wasped and warming, as the vocal slices through the low cloud of bass fed murmur in which the singer is told  ‘everything I didn’t hear,.’  ‘The something so strange and real aching sound and newly crowned king of fakers’ within the developing lyric are wonderfully served by eerie electronica giving way to hipswinging undulations of bass, beat and subliminally aural rain. As the enemies gather at the gates the call for triumph and engagement attains a shattering permanence. The effect is one of battle and confrontation as well as drowning and submersion, intermittently balanced by the musical dark sea surround. This track is a key one in the collection as it beautifully fuses Calloway’s vocal with the intended mood he and Murrell are shaping. The voice becomes another true line of expression, separate to its song like aim, drawing us in as we whirlpool away into the end of this particular now.

Love Machine begins with a below bass thunder, suitable only for Australian dogs  and a spoken call for reformation in which ‘the spyware downloads straight into your TV..now what do you do in front of your TV? Its where we live…’ This perfect pieces of pop philosophy is soon buried in the pulsating wall of sound which has little to with the Phil Spector of old as it has to do with the supposed mental space in which his blackened and incarcerated soul is currently curdling.

The seriousness of that track is wonderfully countered by its successor, the delicious and energising Chunky Monkey, which comes across as a mix of your favourite dubstar and the Stone Roses back in the day of fouled gold. In the musical soup Murrell and Calloway boil and simmer, croutons of your favourite sounds of the simian are floating, from Peter Gabriel’s shocked chimp to The Goodies funky one, with a strand of the great Ian Dury becoming smeared accordingly (reasons to be fearful..).

Not here Anymore is a soulful call for survival after the expectant disappointments of love, informed by that rare thing, one of the singular things in modern music the sound of a middle aged man singing purely and emotionally in a voice tinged with the yearnings of youth and all of the innocence it still wishes to call upon, learn from and adapt. Gentle electric piano mirages through the exotic pop on offer, urging the imagined festival crowd, worn out from the day long rave, into the slow and near sonambulant wavings of their spliffs and cigarillos in time to a pale and long haired blonde, held aloft and swaying in a neatly trimmed T-Shirt.

Beauty at the Party, continues this image of a winsome girl waiting to be won, in a piano led ballad which powerfully echoes the Bryan Ferry of Chance Meeting and/or Sea Breezes, as it stumbles in and out of conventional structure. Glistening star like synth notes decorate but do not intrude as the saddening story is told and all of the aforementioned glory and yearning fights to take its rightful place in the battle between dream and active desire.

Transe State trip trances in like Radiohead on poppers, showing how Calloway and Murrell are masters of all forms of mood and more than able to people their developing future with all manner of changing landscapes and terrorities. The purpose of the record and its title now become clear; chiefly that the future we want is not and can never be one thing or the other. It is simply the conglamporation of forces and reactions to be played at a moments notice on the instruments (real or imagined) of our choice and ability.  We each have the chance to sing our own future and that is how we can find the means to afford its celebration. It is not and can never be one moment or state. ‘This is the strangest of all feelings’ as the lyric states. With the ‘sha la la’ of a bygone age’s backing vocal reminding us of the spaces the heart and soul wish and want to inhabit in and outside of art as it heads towards its white hole of mystery hovering eternally before us.

Addicted to You is the dance hit its title suggests. Here our two heroes emerge from the murk to become Diana Ross and Barry White simultaneously. They are Beyonce and the Bee Gees, Luther and Marvin, complete with all of the soulful shimmers you could ever wish for. A spiral of synth sax and crashing chords, as Calloway, lounge lizards through, a cross between Martin Fry, Robert Palmer and Odysseus. The groove is delightful, the ease, economy and mastery evident. It’s a song that was born in a secret recording studio somewhere ‘on the edge of London’ and is meant for the stars. Jazz flute skitters across the bass funk  stomp of the end section as R n’B horns exhale lustily, while avant garde Morton Feldman style strings underscore all, before being melded into the colour of love’s sickness as it paints the area around us with its swoosey, sweetened  melancholy,

When Everything Stops closes the record and a gentle synth led stumble at its start houses the calm call of Calloway before a second melodic line leads us away from the singular search into phrases of intoxicating beauty. The sound of men can be beautiful too lets not forget, as they move beyond the constraints placed upon them and reach beyond the accepted. This closure therefore contains its own beginning and guests such as Christian Broadbent on guitar, and backing vocalists Christina Whitelock, Kirsty Calloway, Dallas  Ayres, Sarah Vilensky, and a choir containing Simone Ibett–Brown, Cassiopeia Berkeley–Agyepong, Amanda Ibbett, and Lennox Brown assist the glorious conclusion in which a repeated mantra of ‘Everything is gonna be Ok’ both affirms and warns us that this particular future is one of our own planning and imagining and not something we can ever leave or entrust to others. The repetition allows for some glorious backing vocal counterpoint and moves the listener skilfully from optimism to pessimism and back again, through a sense of affirmation and self realisation.  It is the only end  of an album of this sort and one that artfully justifies all that has preceeded it.

Here then are two men  making music for its own sake, as expressions of self belief and the need and call for revelations both intimate and epic take form. Beat The Drum, in marching to their own one or perhaps racing past the accepted and acceptable rhythm, have stumbled onto the true path of any creative endeavour. They have revealed that those of us wanting to involve ourselves in art in any form, if we are to last in any reasonable way and effect or influence anyone, are also those of us willing to be responsible for every step and breath taken and every hand placed. Rather than seek the affirmation of untrusted and it has to be said, unjustified others, they offer the fruits of their own tree, planted and growing now for a new garden of possibility. Their dark electronica is fuelled by sun powered pop and the shimmer of an unclaimed heat. As you seek this record out and listen to it, as you indeed should, if you truly wish to honour the efforts and aims of all men, women and children and thus advance the culture breath by breath and step by step, you will hear not the music of the spheres, but that of two separate atoms still forming, spinning now and seeking connections that are as small and affecting as an explosion or change. The Now is the new, if just for this moment. And for this moment the future is theirs to command.

Reclaim what is passing but holding these sounds in your hand. 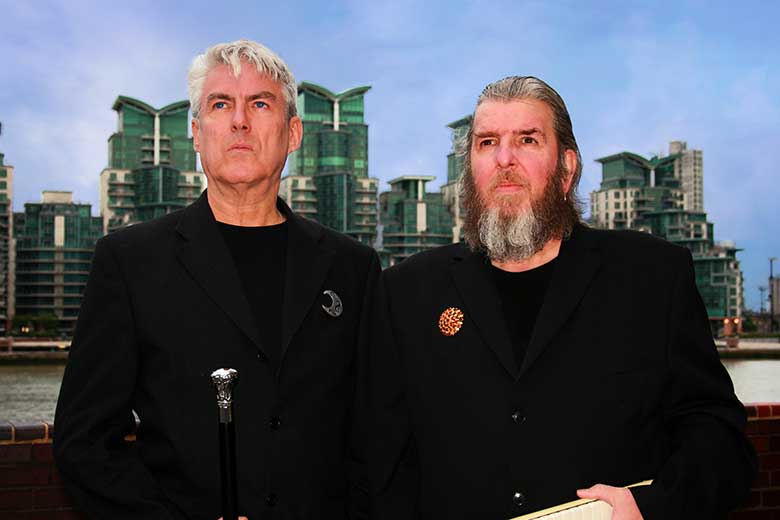 View all posts by David →
This entry was posted on 30 May, 2018 in homepage and tagged Beat the Drum, David Erdos. Bookmark the permalink.