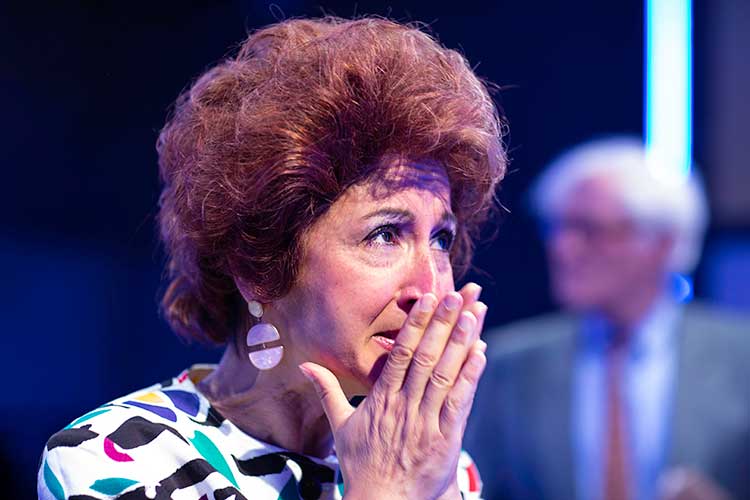 The first thing to say about Shirleymander and its story of Westminster Council’s malign dictatorship in the 1980s under Shirley Porter: it is not dated. On the contrary, it is both dramatically timeless and politically relevant.

Written by Gregory Evans and first broadcast on Radio 4 in 2009, it was at the time a prescient play, anticipating what was about to happen nationwide when the Conservatives returned to power in 2010.

Shirleymander‘s revival and adaption for stage in 2018 is everything to do with the Playground Theatre’s location a stone’s throw north-west of Grenfell Tower. A note in the programme explains how Anthony Biggs’s choice of first play as Artistic Director of the Playground was motivated by a need to respond to the local tragedy. “I was determined … to focus on social injustice and the stark inequalities we witness around us in London. Shirley Porter is not responsible for the fire at Grenfell, but her lack of care for those less fortunate chimes loudly today.”

Thus the ongoing disaster of RBKC finds an unflattering oracle in Shirleymander and to judge by the full house for the performance on Fri 25 May, many will come to consult it. 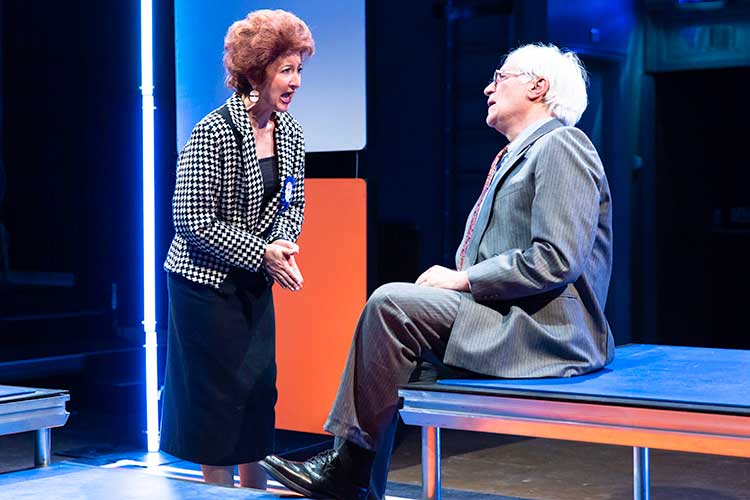 What makes it timeless is the archetypal central character. The playwright read Andrew Hosken’s Nothing Like a Dame which doubles as Porter biography and document of the ‘homes for votes’ scandal. Gregory Evans discovered a “positively Shakespearean” figure, epitomising vices such as “hubris, overweening ambition, a reckless disregard for the consequences of her actions”.

Is she tragic? Porter’s reign was certainly tragic for the disadvantaged people of Westminster. Evans’ tone is at times not unsympathetic. The child Shirley is seen helping her father – Tesco tycoon, Sir Jack Cohen – pack raisins at one of his early stores. But Porter is also a farcical character. One thinks of Alfred Jarry’s Ubu Roi.  Here, Mrs. Ubu is in charge, with grotesque, even gothic, results.

The play brilliantly handles the ‘Westminster cemeteries scandal’ and how Porter’s decision to sell off WCC-run graveyards for 5p badly rebounds on the woman called ‘Leader’ by her cowed but corruptible deputies.

Evans’s portrait is therefore merciful in that it refrains from dehumanising its subject, even though she herself was guilty of dehumanising her unlucky constituents by the thousand. The play reflects the language games of the local politicians. The policies of gerrymandering and social cleansing became publicly known as ‘Building Stable Communities’. Homeless people became privately known as  ‘HPs’. Those who weren’t moved out of the borough altogether were housed in asbestos-riddled towerblocks.

At times the highly controlled wit and humour cuts close to the bone. The audience gets its own taste of Porter’s control freakery at the interval, and at the end when she tells them to go home, “those of you who have homes to go to”. Light-hearted Tory arrogance is taboo in Kensington now, and the joke recognises it. Elsewhere, the delusional anti-heroine can’t see that she’s done anything wrong and blames anti-Semitism. This is of course incorrect. Her actions precipitated her downfall. But at the moment when the Left stands accused of anti-Semitism, it’s another pause for thought. One can see how Porter was very suddenly abandoned by her fellow Conservatives, and how someone of her working class East End Jewish origins could find herself an instantaneous outsider. One of her earlier and worthier campaigns opposed anti-Semitism in golf clubs. We can see what Gregory Evans saw. There’s a touch of Shylock about the character; she begins as a force to be reckoned with, but ends a pariah.

Shirley Porter is a living, now 87-year-old, person. It is gentlemanly of Evans not to hang, draw and quarter her, whilst at the same time sensibly avoiding any libel pitfalls. The play tightrope-walks such risks to tell a highly complicated story with fantastic clarity and precision. This is serious edutainment which throws a gauntlet not only to Elizabeth Campbell’s Kensington but to Theresa May’s Britain.

One of many incisive lines is Shirley’s monologue: “A Labour Councillor once told me – yes I do sometimes talk to them – that his party draws its support from the poor. And luckily, he says, the poor are always with us. Well… not in Westminster they’re not. Not if I have my way”.

The Mondrian-like playground of Gregor Donnelly’s design with its multi-level stages, and slideshow projections of British political history, is a highly effective rectangular platform, with audiences on both sides. The cast are required almost to dance from level to level – one unconsciously worries for them, especially Shirley in stilettos – but thank goodness they’ve been choreographed by a lifesaving Lily Howkins. The occasional song-and-dance routines are a high-octane bonus, and the sampled riffs from 80s popular music endow fresh meanings e.g. ‘Tainted Love’/asbestos. 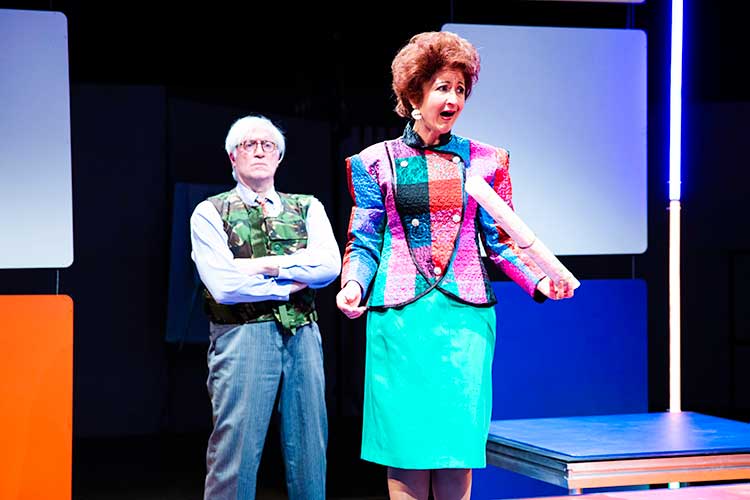 Jessica Martin is a perfect Shirley Porter and compulsively watchable. It is no mean feat to render such a warped worldview as her character’s entirely logical and plausible. Neither script nor actress resort to caricature, letting the facts satirise themselves. Martin’s star performance is enhanced by a dazzling succession of costumes, not to mention Richard Mawbey/Wig Specialities wonderful hairdo. (What is it about tyrannical hairdos? Trump and Jong Un had a serious predecessor in SP).

The supporting cast are tight-knit in their multiple roles. Jack Klaff’s ‘deputy’ teeters on the edge of spontaneous combustion, such is his splenetic and foul-mouthed derision for anyone and anything that isn’t chasing the Tory grail of militant mediocrity. He, George Potts, Amanda Waggott, James Horne and Omar Baroud are highly inventive and versatile throughout. We almost feel sorry for the inner cabal whose meetings were as top secret as a spy ring’s and whom Porter dragged down with her, especially the unfortunate Michael Dutt. Actorly sneers and grimaces evoke culpability. The ensemble communicates with comic finesse how unstable the architects of the Building Stable Communities actually were. It is a pleasure to behold a team of dedicated artists collaborating on such a venture.

The moral is mixed. Porter almost literally got away with murder, but her reputation is damaged beyond repair. She seems so rich as to be beyond the law, evading most of her £43m fine, not to mention a prison sentence. Yet Thatcher is still seen as ‘divisive’ rather than criminal and Tory policy for the last 8 years has been such an orgy of social cleansing, asset-stripping and gerrymandering it makes the Book of Revelations look tame.. We hear a lot about ‘boundary reform’, another euphemism? I leave the final word to the prophetic bloggers of the Grenfell Action Group (see links below).

Niall McDevitt is the author of Porterloo, a collection of poems satirising the Conservatives return to power in 2010.