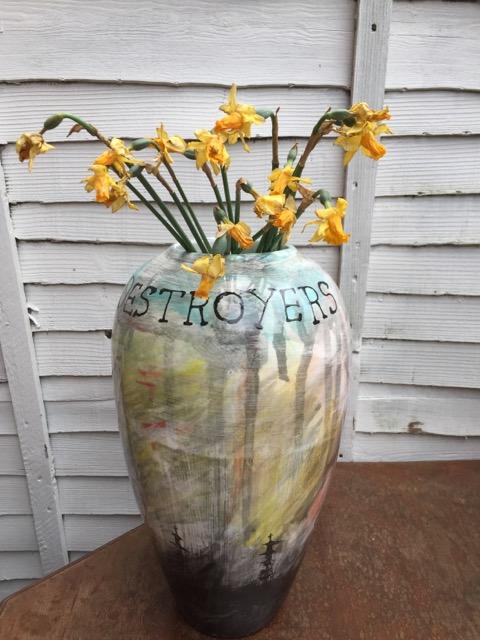 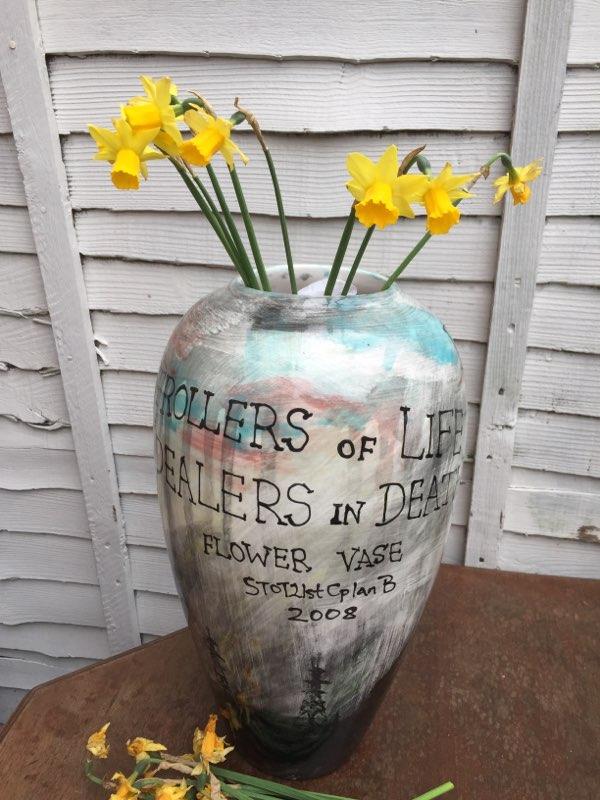 This week’s art piece, my favourite flower vase; Controllers of Life and Dealers of Death. 2008, by STOT21stCplanB – aka Steve Lowe and Adam Wood of the L-13 Light Industrial Workshop This fine piece was inspired by the 2008 crash, after which the flowers of the one per cent flourished and most others didn’t because of the resultant austerity ripping through our social and health services.  Keep an eye on www.L-13.org  for new Covidian art coming through.   They will have something to say.

My consumption of media this week has been irregular and random, a thing of shreds and patches.  I limit corona coverage and won’t watch junk, which rules out most TV (except for DEVS on BBC2, excellent). I concentrate instead on live streaming and the feeling of collective consciousness, singling out a play reading ‘Somebody Else’ by Jonathan Chadwick with actors Laura Lake Adebisi and Ruth Lass about the relationship between a refugee and her helper.  It had great emotional truth and each actor zoomed in at us, as if we were the other character. The intimacy of that was extraordinarily right for this time of lock down and really made the best of Zoom. Unlike the National Theatre’s live streaming, which I’ve experienced as theatre coming through the wrong medium. Stage theatre, like love, needs pheromones.

Best bit of radio drama was catching the end of the Today programme, and a Matt Hancock ‘work in progress’ interview, Nick Robinson interrupting him yet again. ‘Please, PLEASE let me finish’, said the Sec of State, his voice cracking with latent rage.  Robinson said that he’d interrupted to make a point about clarity. Yet MH was actually being very clear about not being able to be – clear.

And then a feature on Beethovens 250th; or rather his ninth – and I thought I heard, or misheard one of the musicians call it Beethoven ninth sympathy (read it again please).  As the great isolate and humanitarian, Beethoven would have understood what we’re going through.  This symphony is one of the most defiant and joyful pieces of art on the planet.

I washed my hands in my red leather gloves. Oh well.

Eastertime, I enjoyed listening to religious leaders sounding like Bolsheviks; peace, land and bread and all that (well, not land as the church still owns so much of it) but the drive of the Easter messages were clear: stop wars, feed the people.  The Archbishop of Canterbury’s address from his kitchen was a nice bit of theatre. I thought the dresser looked like a triptych altarpiece.

Meanwhile, I re-arrange stuff in a house that used to be a social space, chairs that no one else will sit on are shoved under the table. At one time, a long, long time ago, I would only tidy up if people were coming round, yet here I am, being what my mum would have called house-proud.  Shouldn’t there be a furniture polish called Self – Estsheen?    Things take longer to do as the brain resets itself – but then there is more to do.  Or is it the other way around?  More attention is paid as time spools out. My fingers are greener and I’m looking at objects for recycling in the same way a Filipino fisherman might once have looked at a shell.   Is this needs must?  or a new creative way of living. May others discover that too.

I loved this  – ‘My today’s all right’ from ninety-nine year old Captain Tom walking round and round his house – to raise funds for the NHS.  Yes, but, er, shouldn’t the government be doing that?  I don’t want to be uncharitable, but the media politics around this are very dodgy.  I imagine Captain Tom Badges of Merit, as folk are asked to fundraise for what is their right.  I heard on Radio 4 today from a football pundit that ‘the sport will resume after the NHS steers the country to safety.’  Such clarity.  we mustn’t let ‘them’ privatise any of it.

There is an ancient Vedic saying The present is the future in the making.  And for social and political change to occur, vastly more people need to experience the happiness of giving to people rather than of making money.  The organisation 38 degrees take its name from the angle required to start an avalanche. It only takes a slight tip.   As I file this piece, the news out there is unbelievably awful.  I want to weep.

View all posts by Jan →
This entry was posted on 18 April, 2020 in homepage and tagged coronavirus diary, Jan Woolf. Bookmark the permalink.