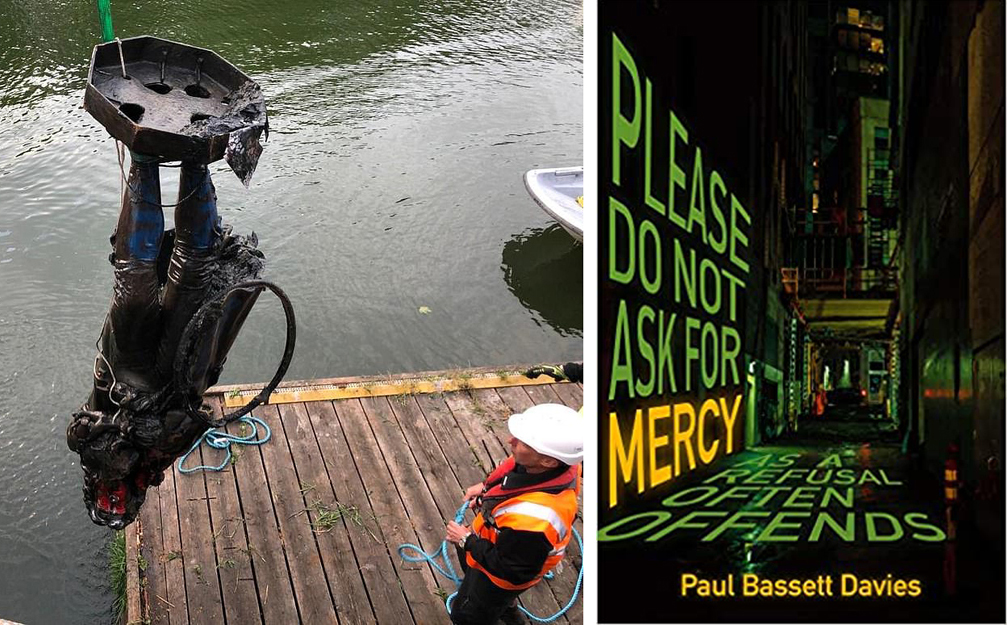 The two images link.  And so dear reader, I married them.  Colston’s dip in Bristol harbour was well overdue, but his retrieval inevitable.  Gratifying to see that red paint on his face and the barnacles around his bum.  As a work of art it’s lamentable, but the tearing down as a performance, excellent. Let’s hope that Bristol museum has the integrity and imagination to exhibit it as an example of progressive iconoclasm.  Such an exhibition should also remind us that the slaver Colston had his initials branded into the flesh of his slaves.

Statues – those ossified personifications – have been all the rage this week.  They’ve been shivering on their plinths, like the religious art the French revolutionaries tore down.  Will it be Cecil Rhodes in Oxford next?  These awful statues are a proof of a different consciousness; their removal showing us a new one. They’ve been part of a historic mind-set for millennia, symbols validating the powerful, and that’s why it’s dead art.   That statues of slavers have been around for so long is the real surprise, and an affront to people of dark skin – well most people actually.  Interesting that the politicos protesting such ‘vandalism’ on the media were whooping with joy when the Berlin wall was pulled own.   And since statues are on trail, what about Eric Gill’s reliefs on the façade of Broadcasting House?  But that’s another story, about the sculptor, not the sculpted.   Watch this space.

I’ve just finished reading Paul Bassett Davies’  dystopian satire Don’t Ask for Mercy as a Refusal Often Offends.’  Set on Landmass One, a world familiar yet unnervingly different, we follow the adventures of a private detective trying to solve a murder, and trying to accommodate the women in his life; carnal, romantic  and platonic.  It’s pretty dark, but like the best comedic writing, makes you laugh by mugging you with something extraordinary after the mundane, or the other way around.  It questions power, propaganda, and corruption, while maintaining emotional intelligence. It’s also bloody funny.   So the politics (nothing didactic by the way) slip down nicely. It’s also great story telling, with a hilarious set of Gospels as an afterword.

View all posts by Jan →
This entry was posted on 13 June, 2020 in homepage and tagged Jan Woolf. Bookmark the permalink.