IN THE YEARS leading up to his death in July 2017, Heathcote Williams wrote a series of portraits of people he either knew or admired. He was planning for these portraits to be published as an anthology to be called Juggling Ghosts.

At the time of his untimely death, not all were finished, notably Christopher Smart, about whom he was still writing from his hospital bed with a laptop propped up on his knees, hammering away at the keys to the end. In this case we decided that rather than publish only the part of the poem that was completed, we would include the piece as a work in progress to give the reader some insight into his working methods and also a picture of how the poem would have evolved had he lived longer. Anyone who knew Heathcote would know that nothing he ever wrote was finished, he carried on writing right up to the press deadline, making amendments and correcting proofs to the last minute when the button was pressed and the book printed. Even when signing copies, he would still be making handwritten corrections on the printed page as he handed you a copy.

Juggling Ghosts is a highly unusual piece of writing. The portraits were written over a number of years and many were published individually in his lifetime by small independent publishers.

This collection will be published by Open Head Press as a series of individual booklets with an introduction by Prue Cooper, his sister, and with illustrations by Andrzej Krauze.

The collection, published in a numbered edition of 500 copies, with a further few copies hors commerce, contains 13 individual booklets, each one of a different length.

Printed by Red Dot Design on Fedrigoni Arcoprint 1 E.W. (FSC) paper, with covers for each booklet on Corona Colours (100% recycled). Housed in a matching slipcase made by Grays Bespoke Binders in Corona Dark Grey. 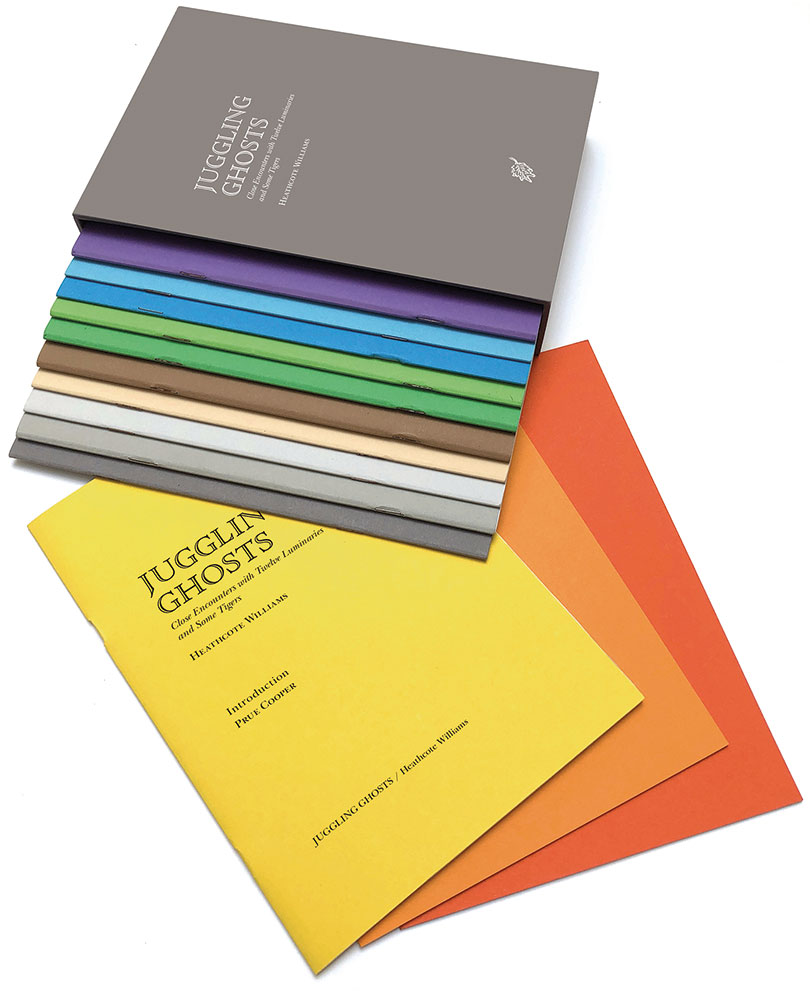 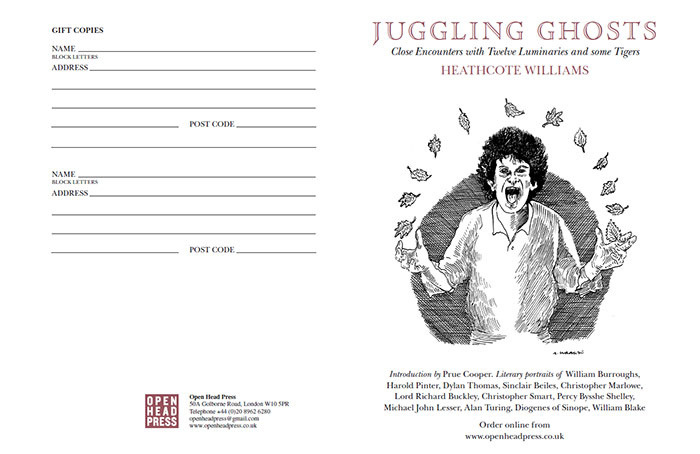 We’re very pleased to announce the upcoming publication of Juggling Ghosts. This is a one-off opportunity to purchase this publication which will not be available in bookshops

To shock and expose was his job. Poetry had to unsettle, subvert, with luck destroy, whatever stopped human beings thinking freely and acting justly, as he understood justice: consumerism, militarism, modern psychiatry, ossified institutions, brain-numbing new technologies.
THE ECONOMIST

Tweet
This entry was posted on 18 September, 2021 in homepage and tagged Close Encounters with Twelve Luminaries and some Tigers, Heathcote Williams, Juggling Ghosts. Bookmark the permalink.