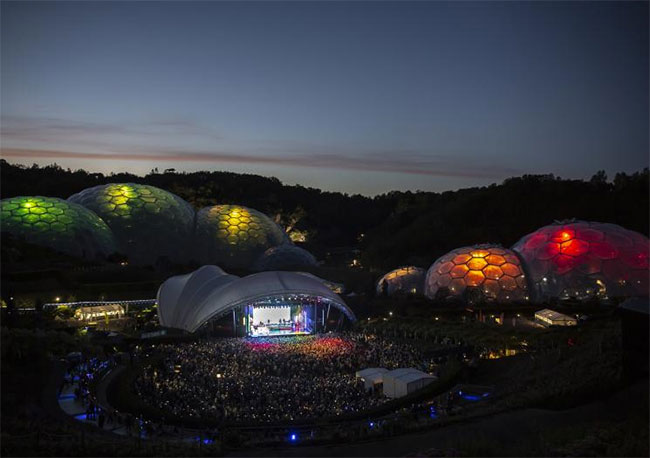 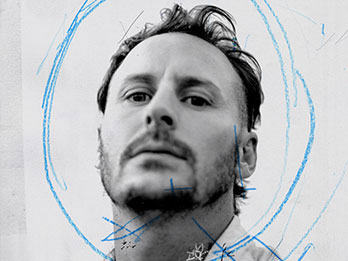 It’s good to be back at Eden post-pandemic, if a little unsettling to be amongst so many people, however strict the entrance checks for covid jabs and testing. But as ever, the gig feels friendly and well-organised, with food, bar and toilet queues not too long, and plenty of space in the arena. The catering and cleaning staff will have their work cut out though as this year’s Sessions have been compressed into one busy week of gigs.

I only saw half of support act Femmes de la Mer, as I took time to visit the Mediterranean Biome and pretend I was in Italy. The group’s songs drifted through the mild air across the blues, white, red and yellow of the plants and intrigued enough for me to make my way to see what was going on onstage. Truth be told, this is a women’s community choir, whose fifteen members are gathered up from all over Cornwall and whose setlist mostly contains acapella arrangements of folk songs and shanties with a Celtic connection. There’s no denying their vocal skills, but they seemed a little lost on such a big stage and I’m sure I am not alone in wondering what on earth they were doing there, beyond perhaps ticking a funding box for local engagement. I wish I’d stayed in the biome a little longer.

It was only during lockdown that the name Ben Howard entered my consciousness. My younger daughter and partner decided to buy a ticket to watch a live streaming concert he broadcast from Goonhilly Earth Station. I enjoyed his moody and atmospheric concert and downloaded a copy of his Collections from the Whiteout album, which is apparently a change in direction too far for many of his fans, who were moaning about the lack of hits he played at Eden.

But you don’t miss what you don’t know, so I don’t know what his previous albums were like or what was missing from the current setlist. The band (as far as I could make out Howard plus bass, drums, second guitar, keyboards and keyboards/violin) started with three moody songs from the recent album, and continued in a lowkey, melancholy mood for the rest of the gig. Punctuated by only the briefest of introductions and accompanied by low-fi visuals on a small screen that, at best, combined treated live footage with pre-recorded films, there was little variation in tempo or texture, with most songs combining mid-tempo rhythms with mumbled vocals, fuzzed out guitar and interludes of violin or keyboards around Howard’s soloing, who tonight was channelling John Martyn.

Now mostly that’s a compliment, although the only time I saw Martyn play live he was so drunk, incoherent and incompetent on stage that I (along with many others) left at the interval. Howard wasn’t drunk, although he had to sit down to play, due, it seemed, to some kind of injury that required him to use crutches to walk; and he certainly wasn’t incompetent. What he does lack, however, is any sense of showmanship or engagement with his audience, and – it has to be said – any sense of pacing. Tonight’s songs all blurred into one long mid-tempo epic, with little to distinguish one part from another.

I should stress there were plenty of people around me who would disagree and knew many of the songs I didn’t well enough to sing along with; but they were also the ones moaning about the lack of greatest hits. In the car on the way home, there was a clear sense of being underwhelmed emanating from my daughters though. It wasn’t a bad gig, they argued, just, well… maybe he still preferred playing the small clubs and bars he used to? And they were right, it would have worked much better in a smaller environment, rather than squinting from a couple of hundred yards away. I’d still have liked more sense of dynamics (after all, you can rearrange and play songs faster than the recorded versions) and more engagement with the audience (as well less out-of-tune singing from my neighbours). I also think it’s time for a visual rethink: it’s all a bit low budget and D.I.Y. at the moment. Even if you want to keep the same vibe and feel, it all needs to be larger for an arena venue.

Tonight’s gig was enjoyable enough, but it was a long, slow musical burn that never quite turned into the expected or desired sonic flames or fireworks. But at least live music is back – long may the Eden Sessions continue!

View all posts by Rupert →
This entry was posted on 18 September, 2021 in homepage and tagged Ben Howard, Eden Sessions, Rupert Loydell. Bookmark the permalink.

One Response to Slow Burn