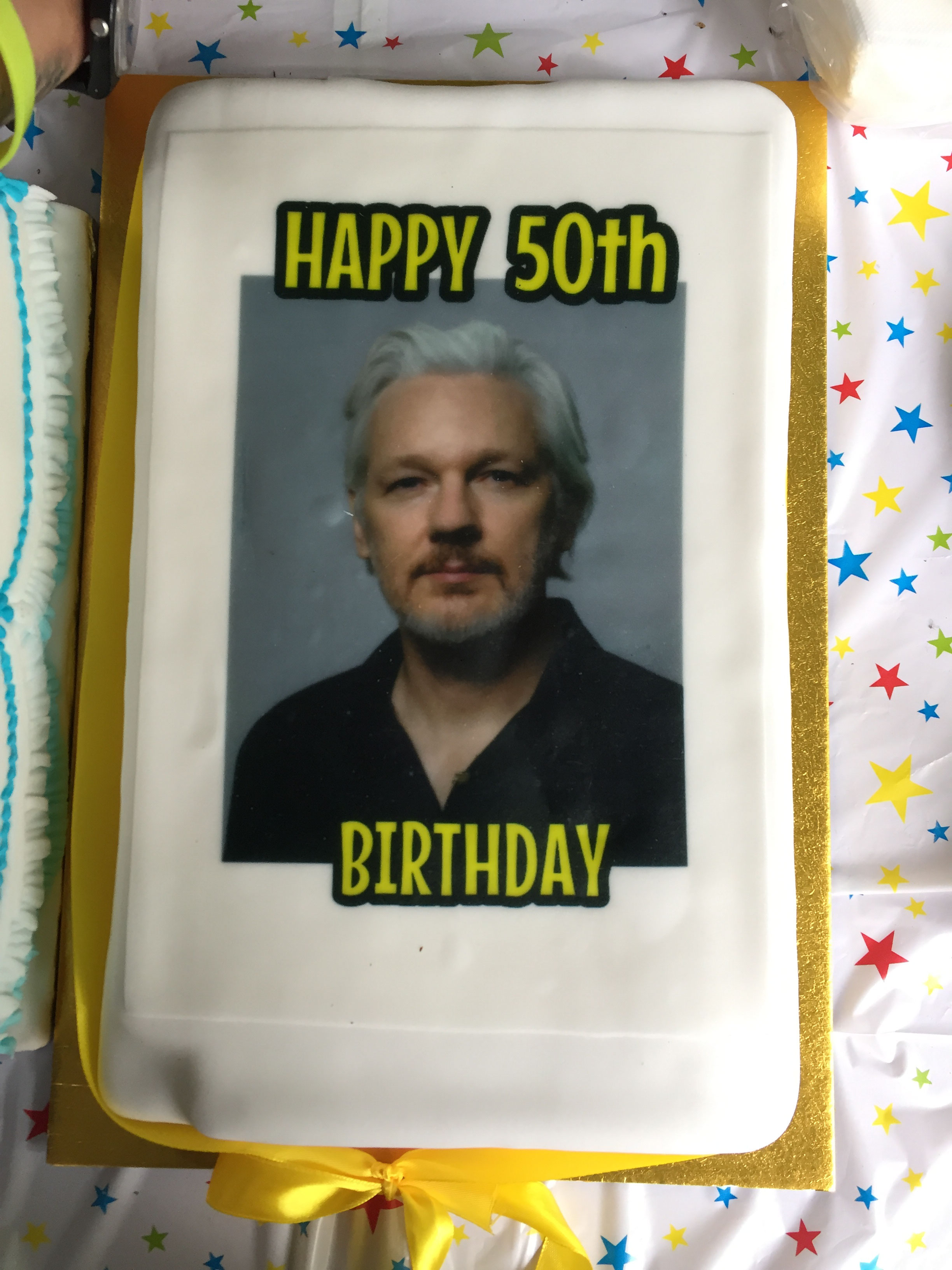 I don’t know if any 50th birthday presents made their way into Belmarsh Jail for Julian Assange today – but there was a great presence outside all day as the campaign to Free Julian Assange held a party. I hope he heard us. There were readings, messages of support from all over the world, and cake.  This was my offering from the recent Our Friend Julian writers’ event held on May Day.   A Month of Mondays

Monday April 5th 2021 – Easter Monday.  The 11th anniversary of the Wikileaked film of the shooting of civilians from a US gunship. They were gathered on a pavement in Baghdad.  Easter Monday – for many too, symbolic of rising from the dead:  I’ve no religion but have some ancestral harking back to the importance of this in agrarian culture, but not from Baghdad pavements.  The raising of the dead man in the Easter story, Jesus Christ – a dissident – was hardly heard of at his trial, just over 2 millennia ago.  Now known to everybody, EVERYBODY, whether you worship him or not.  How many know about you, Julian Assange?  Would I be blaspheming to point a similarity?  I expect so and I don’t care.  There’s no inquisition to come for me – as one came for you.  The Pope sent you a ‘kind and personal’ message in jail; a jail in England, the bastion of human rights – home of the level playing field, home of the finger pointing at corrupt regimes elsewhere.  Easter is also a part of the division of the year – essential for human happiness. It helps a year slip by. Helps it build. Lock down may have been our cross to bear – but lock up? As we creep out of our Covidian lairs, liars claim the news, and your suffering continues.

Monday April 12th. Scrolling back through old emails, I find one entitled, Plinth People, it’s to do with an old campaign.   Who to put the fourth plinth in Trafalgar Square.  You should be on it  Julian.   Edith Cavell is just around the corner.  ‘We carved her name with pride.’

Monday April 19th.  I feel I should leave off the feelings a bit – drop the analogies – and find a fact.  Here’s one.  Extradition shall not be granted if the offence for which extradition is required is a political offence.  Article 3, paragraph 4 of the UK/US extradition treaty.   Of course you offended them politically, as they offend us with their wars.  But anyone who knew what you knew, and DIDN’T tell, would offend me, and would fail as a human being. In fact it is an offence to destroy such information, so you Julian had no choice but to publish.  There were Reuters journalists in that gunship in Baghdad, filming.

Rat tat tat. Good shoot. Rat tat tat. Good shoot. Ratatatatat. All those individuals are now disengaged. We Fucked all those individuals. Nice. Tatatata. Look at that, right through the windscreen. Nice. Hey he just drove over a body. Ha ha ha They got a wounded girl in there. Rat atat atat Its their fault for bringing their kids into battle. That’s right. Rata a tat tat

So why are you in jail Julian and not them. Because you sought refuge to escape a charge for something for which charges have been withdrawn, but that would have allowed extradition to the USA.  The Military Industrial Complex want to get you  and throw away the key.

Monday April 26th – I’d love to hear you on Oprah.  You would be asked to ‘share not tell.’  To SHARE your truth. But would you be invited? Maybe your social skills aren’t all that?  You know.  And they would have taken a dive in prison.  They are making an example of you Julian, and know, that in freeing you, they free the truth.  Journalists – behave your-selves.  Or it will behove us to crucify you.

May 1st. Mayday.  Different things to different people.  So put your hand on a good book, any good book, and say ‘I promise to tell the truth, the whole truth and nothing but the truth.’