I started La Bouche back in 2008. It was all before the Tories and every night there were great parties and art shows.
Hackney Wick was just artists, ravers and travellers at the time, and there were other places we used to go, like the George Tavern. I was having inspiring conversations all over the place and just wanted to capture all these thoughts and ideas in the underground party stratosphere. It is very much a zine about talking to each other, going out and having a natter, a joke and more than often, a rant.  So that was why I wanted to name it after the mouth.  It sounded better in French, although we later considered renaming it Le Gob. 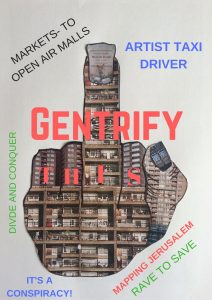 I was always seeing really wild and political art and music on our jaunts, and meeting great thinkers, really far out conspiracy theorists and just complete eccentrics. So I wanted to feature all this in the zine, and capture it all.  I really loved everything they had to say and so I did a lot of interviews with people like the band ‘Dead Kids’, former MI5 whistleblower David Shayler and the punk-step band ‘Nova’.  We also found ourselves getting interviews with people like John Pilger, Pete Doherty, The Fall, Viv Albertine, and most recently, Peter Tatchell.. to name a few.

I think one of the most memorable interviews is with Aaron Baarshack who is famous for gate-crashing Prince William’s 21st birthday party.  Few people know he’s a performance artist and it was all part of a summer-long comedy sketch about Saddam and Obama on the run. It is just such an outrageous interview.

I wanted the language in La Bouche to be very easy, fun and anti-academic. So a lot of it is kind of written in the style of a gossip mag.

We have grown more and more and I have an awesome co-editor Alex, gossip columnist Quilla Constance (the great performance artist), anti-poverty NGO War on Want write for us and we also have our own in-house conspiracy theorist. We just released issue 10, Gentrify This and a column on Byline.