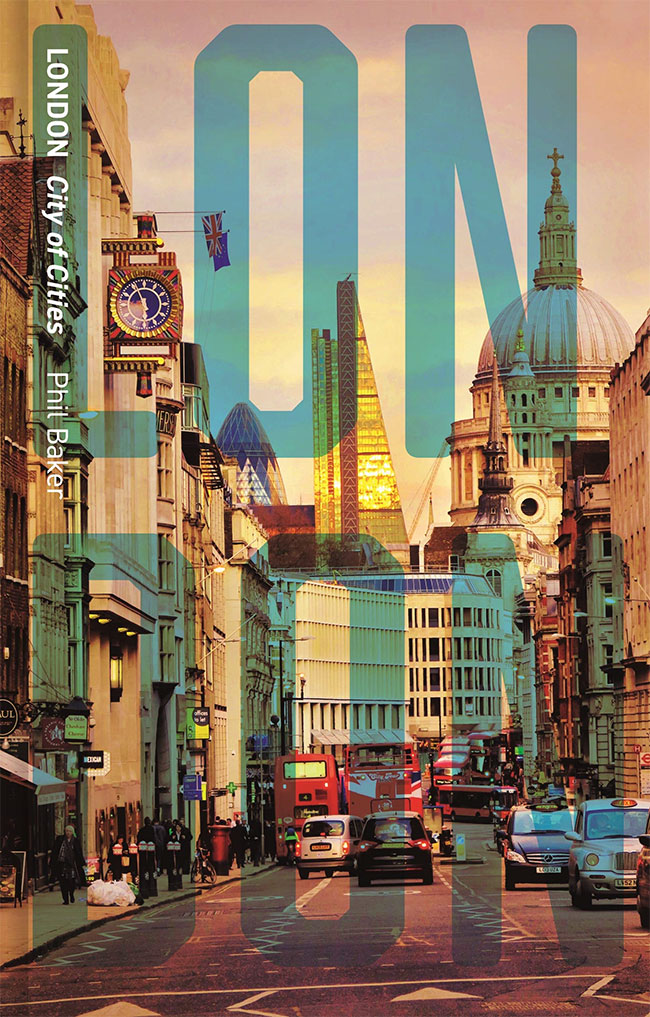 Reaktion Books were previously responsible for a wonderful series called Topographics, that included many titles which came at place[s] from a number of oblique angles. Their current Cityscopes editions are more straightforward: a potted history, some essays on the contemporary city, along with a profusion of photographs, marketed as ‘essential cultural companions to the world’s greatest cities’.

Phil Baker does a nice job of summarising London’s history from 1000BC onwards. His prose is engaging and concise, and swiftly transports the reader into the current day in just 140 pages, having swiftly dealt with the Romans, the expansion of the medieval city, plagues, fires, punks and yuppies en route. It’s a well told summary, but I am less convinced by the rest of the book, which features essays on ‘The City Today’ followed by a ‘Listings’ section which includes a bullet point chronology of Baker’s ‘History’ along with his bibliography., references and acknowledgements.

I was expecting something new to be honest, but Baker treads well-work paths (sometimes literally) as he tramps through the central London parks in ‘Green Spaces’, mocks hipster development and Jack the Ripper tours in ‘Whitechapel Traces’, goes up The Shard to view London’s ‘Towers of Babel’, and gets all gothic in Highgate cemetery. Worst of all are the pieces on Viktor Wynd’s Museum of Curiosities, which tries to present the subject as some sort of new and secret venue the author deigns to share with us, and a half-hearted visit to some of the author’s favourite ‘Pubs and Bars’, many of which I would regard as tourist traps and best avoided.

It’s all very nicely done of course, and if you’re new to the city (or new to reading about the city) then Baker’s book will engage and amuse. For Londoners, cynics, and those with previous regarding London reading matter, it’s pretty much the same old, same old.

William Blake, of course, gets a mention, in Baker’s book, and Jason Whittaker’s Divine Images is a fantastic mix of biography, art criticism and literary engagement which serves as a wonderful introduction to this complex and confusing artist. Whittaker has previously written several academic volumes on Blake, culture and the digital, and kind of combined them in a book called Blake 2.0 which looked at Blake’s ‘presence’ in 20th century art, music and culture.

It’s this ongoing influence and fascination with Blake, despite his complex mysticism and multi-genre activities (author, printer, publisher, artist and visionary) that makes this volume particularly welcome. Whittaker brings a depth of knowledge and understanding to his writing, yet is able to guide the reader through the strange beliefs, mythologies and occult systems that underpin Blake’s strange and wonderful works.

Whittaker is able to give us a historical context to Blake’s life and beliefs as well as use succinct examples of paintings and poetry to evidence them as they are reimagined and revised, and also shows how Blake has continued to inspire and provoke contemporary culture, be that hippy new-age vagueness or Iain Sinclair’s more recent hard-edged psychogeographical mysticism.

In many ways the parts of this book when Blake is in London, be that physically or as an influencer and historical precedent, tell us more about London than Baker does. By having a focussed and informed eye, and writing through the lens of William Blake’s work, Whittaker has produced a clearsighted and informative, highly readable biography and culturally expansive book.

View all posts by Rupert →
This entry was posted on 24 April, 2021 in homepage and tagged Divine Images. The Life and Work of William Blake, Jason Whittaker, London. City of Cities, Phil Baker, Rupert Loydell. Bookmark the permalink.