Posted on 6 September, 2017 by Rupert Loydell 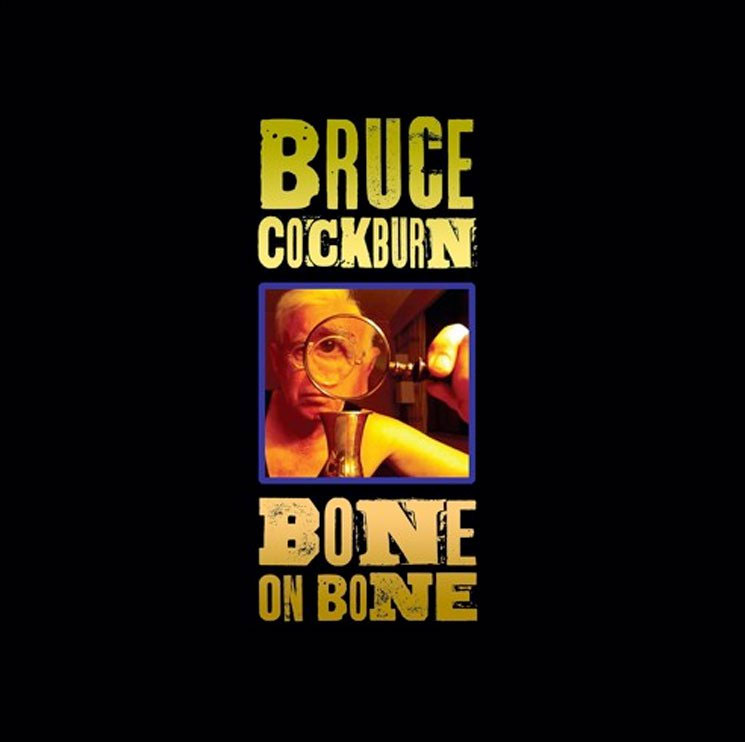 I’m not alone in thinking that Bruce Cockburn’s releases for the last decade or more have not been very exciting, certainly nothing to match his 1970s and 80s output, (particularly The Further Adventures of,  Humans and Inner City Front for me) when he was busy combining mystical visions of nature with sceptical questioning of both faith and politics, and drawing on the guitar explorations of bands like Television’s Tom Verlaine, what became known as world music, and the work of writers like poet Allen Ginsberg and mystical novelist Charles Williams.

So although I’ve continued to listen to Cockburn’s music, and read his autobiography last year, I’ve learnt not to expect anything earth-shattering or too different from him, just enjoy the music and lyrics. This seems a sensible approach, as people are far too good at claiming so-and-so has made a return-to-form or that their new album is their best ever. Bone on Bone is neither of these, but it is an interesting, freewheeling, loose-limbed and lithesome collection of songs (and one instrumental), with some revisiting of ideas and themes from earlier works.

The album begins with a fingerpicked acoustic guitar and then the sound of singing bowls, before Cockburn considers both personal and national identity in ‘States I’m In’. It’s a clever pun, a playful approach that’s continued with the second track, ‘Stab At Matter’, a  wordplay on Stabat Mater, which is the name of an ancient hymn exploring Mary’s suffering seeing her son crucified, here re-imagined as someone shaking off lamentation through incantation and revelation, moving on to ‘set the spirit free’.

Elsewhere, Cockburn people watches in the city, waiting and wondering about strangers and his state of mind, considering ‘Cafe Society’ as a wonderful ‘sip of community’; reimagines ‘Forty Years in the Wilderness’, perhaps linking to Jesus’ 40 days out there, an event he previously wrote about in ‘Dialogue with the Devil’; wonders about where his ‘road would be / if not here’; and considers the desire for and pull of spiritual belief in the loping chug of ‘Jesus Train’. The album concludes with a cover version of the gospel song ‘Twelve Gates to the City’, here a metaphor for heaven, peace, love and communal living, where ‘no matter what tribe you’re in there’s a way in for you’, everyone is welcome and all can find a home. It’s a clever and uplifting, oblique critique and stand against racism and nationalism, and all the better for that subtlety, in contrast to the somewhat heavy-handed ‘3 Al Purdy’s’ earlier on.

Throughout, the production is warm and clear, often simple and direct, always considered and appropriate. Cockburn’s (mainly acoustic) guitar playing is exemplary, the percussion, keyboard, accordion and cornet particularly effective when introduced to shade and colour the music. Cockburn has clearly relaxed into San Francisco, is enjoying family life as an older father, and benefitted from five years away from the recording studio. Bone on Bone is a carefree, and enjoyable album that intelligently explores the spiritual and societal states we’re all in. I’ve been playing it over and over again for the last few weeks, and will continue to do so. Despite being well known elsewhere, much critical acclaim and several UK tours, Cockburn remains somewhat invisible over here. Let’s hope this helps raise his profile, even if it is 40 years too late!

View all posts by Rupert →
This entry was posted on 6 September, 2017 in homepage and tagged Rupert Loydel. Bookmark the permalink.