Posted on 5 February, 2022 by Andrew Darlington DAVID BRITTON
18 February 1945-29 December 2020
An interview-overview with the perpetrators of
‘Lord Horror’ – 1989s most controversial novel,
its related comic-books and records.

‘…our civilisation is rapidly approaching a second Romantic age…’
(Michael Butterworth’s letter to ‘New Worlds no.158’, 1966)
‘…we sincerely hope that the current Savoy moral ambiguity
phase does not press goodwill beyond the call of duty…
(Michael Butterworth & David Britton ‘Lord Horror no.1’ editorial 1989)

Lord Horror is a sinister legend, a snuff movie for all senses, choreographed to a maximum erotic electro-beat. Lord Horror is a uniquely motivated serial killing machine, a cross between ‘Stormbringer’, ‘Mien Kampf’ and ‘Skinhead Moonstomp’. Published in 1989, it’s everything ‘Texas Chainsaw Massacre’ and ‘2000AD’ promised to be, but couldn’t measure up to. On one level the ‘Lord Horror’ novel concerns Adolf Hitler’s quest to Manchester to locate Schopenhauer’s lost manuscripts, on another it’s a savage literary/anti-literary extravaganza, a head-wrecker – and then some! It’s a novel that first transfigures morality, then roars like a get-away car all the way from magical realism to voodoo surrealism with regular stops at the Transylvanian Brain Surgery on the way. There’s a lethally foul and viciously black wit in there too…

‘…amongst the infrasound of roaring blood Horror dipped his head into the open chest, laying still for a while in the soft ooze within. He snuffled, swallowing a mouthful of the blood. Edging further into the gash he gripped one of the man’s organs, knotted with veins, between his horse teeth and tore it away. He stood up, letting the organ trail in the wind, and then dashed it against the back window of a terraced house, where it clung like a piece of red afterbirth on a glass slide…’ 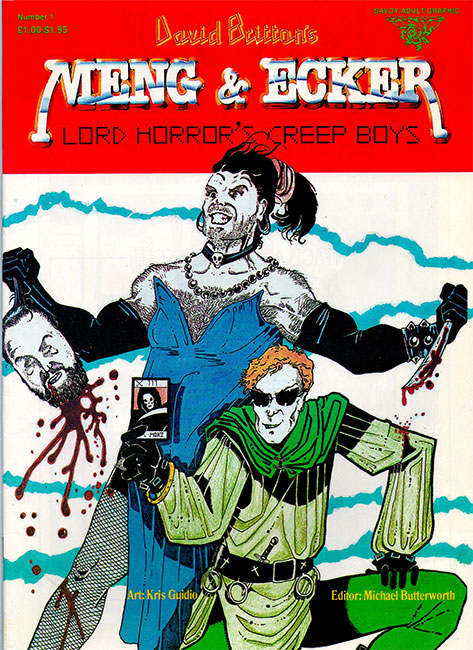 ‘Lord Horror’ is a novel; it was also part of a Savoy continuum that includes related comic-books, and a series of twelve-inch vinyl singles. Meng & Ecker – Lord Horror’s Creep-Boys, were shocked into graphic format by Kris Guidio, trailered in his large glossy anthology ‘Sinister Legends’, and by his Rock music involvement with The Mission, Roky Erickson, The Cramps, Johnny Thunders and others. And the comic-books explode with more abrasive invention, satiric montage, iconoclasm, sexual and narcotic flirtations, and sheer creative ENERGY than the rest of the much-vaunted graphic-novel medium can ever aspire to.

‘This year is Savoy Supernova – again!’ said Michael Butterworth, the ‘Lord Horror’ editor and co-conspirator, at the time. ‘We either make it or we burn ourselves out for another five years and try for a third time lucky attempt some time around the future…!’ There had been advance notice about the records – articles on them were splashed in shock-horror style spreads across the tabloids, ‘The Daily Mirror’, ‘The Sun’ and beyond; from ‘Royal Insult Album Blasted By MP’ (‘Manchester Evening News’) to ‘Pop Group In Sick Cocaine Taunt At Charles’ (‘Daily Mirror’, 29 December 1987), until subsequent Savoy product was banned by every record distributer in England. ‘We still can’t get a distribution deal, the Indies think we’re fascists and the majors want something more ‘commercial’, ie, something they can sell to a family audience. Various small entrepreneurs pluck us up, examine us, and then put us down again. “Anarchy In The UK” (by P J Proby) would have sold like shit off a shovel if they’d taken it… the record got mentioned and talked about all over the place. Actually – so ambiguously ironic have some reviewers styles become that even the good reviews read like bad ones, and by the same token, the bad ones read like good ones!’

Needless to say, the publication of the ‘Lord Horror’ novel evolved through a similarly eventful process. ‘We’ve had to find OK people for just about every stage of the novel’s production, which is one of the reasons it’s taken so long to do. We find a person who’s prepared to do one stage but after completion he won’t pass it on to his usual contractors for the second stage – because he doesn’t want to be SEEN to have handled the book! And each stage has had to be well lubricated with ‘readies’. We tell you, the fact that this book actually came out at all is a miracle.’ A further ricochet in the tale was provided by James Anderton-coordinated Police raids resulting in the confiscation of much Savoy stock, on suspicion of bad taste. But there was worse to come. In 1992 ‘Lord Horror’ became the final publication to be banned under the antiquated ‘Obscene Publications Act’. Dave Britton even served jail-time at Strangeways Prison, and although charges were subsequently overturned, confiscated copies of the book were never returned. Unbroken, he went on to write a series of sequels.

I first read ‘Lord Horror’ in manuscript form when it was circulated under the pseudonym ‘Robert France’. It’s recognisably stylistically a mutant product of the mutually brained-out Butterworth-Britton synergy, but it’s also totally unlike anything they’d ever produced before. Superficially accessible in its narrative form it’s deliberately self-sabotaging in content. Recall the ‘Sunday Times’ ‘Hitler Diaries’? – a none-too meticulous splicing of faction, a scam, a botched job, whereas there are entire sections of ‘Lord Horror’ where the interface between real and invention is impossible to trace; the Schopenhauer Manchester connection, the Nietzsche versus boxing kangaroo cross-over – the joins are near seamless. The dialogues on literature and art are brilliant confections, just as the surreal absurdist bits are grotesquely effective, and the bad taste badder than bad. As a piece of sustained imagination it’s the most bizarrely impressive thing Savoy had produced. Individual vignettes, like the tale of Lord Horror’s lost tin soldiers, the formulation of wino’s ‘parafinese’ – a language of grunts and slurs, and the fecund entombment of Lord Horror in a shit-shell are hypnotically beautifully delivered – even those that never made it into the final hardback, and would still work as well if sliced off into short stories.

The novel’s terrain is mind-bending disgust, an immaculately frightful obscenity, a horrid gut-churning blackness with a fascination for gore and excreta that extends from Times Square – ‘a red hell-rimmed crater, crawling with beetles,’ to the outer rim of the solar system where ‘the huge light of the planet went out. A motionless Sargasso of stars suddenly appeared. They seemed so close, the gems off the fingers of all the dead girls, and he thought at first they were imprinted on his eyes…’ Reading ‘Lord Horror’ is the literary equivalent of being smashed through the windscreen at twice the speed of light.

But it’s the racial angles that guaranteed its rejection by every publisher, probably, this side of the still-extant apartheid South Africa. It’s the David Bowie fascist salute thing all over again. How much of it is there for shock effect – and the shock effect IS shockingly effective, how much of it is merely consistent with the internal thought-processes of its diseased and twisted characters, and how much of it is intentional irony? I’m not prepared to hazard a guess at sorting out the ratios – the whatever-the-hell the ethics/immoralities of it all, ‘Lord Horror’ is one bitch of a novel that works like Chernobyl on a short short fuse. The Josef Mengele Dog-Boy experiment is incandescent; pure William S Burroughs crammed screaming through a Dada black hole of Dave Britton’s most perverse Aubrey Beardsleyeque artwork.

A female character might have helped add a dimension, but to call the novel obsessively phallocentric is to state the obvious – as well as being inappropriate, as Old Shatterhand itself – Hitler’s monster carnivorous sentient penis, provides all the argument needed on that score! But within its own frame of reference ‘Lord Horror’ WORKS, and outside those parameters the Michael Butterworth quotes which open this article chart the external shift in moral climate from the naïve expectations of the mid-sixties to the debased materialist cant of end-of-the-eighties Thatcherist nihilism. In that sense ‘Lord Horror’ is a book exactly attuned to its time. As much a part of – and as an integral a product of 1989, as Salman Rushdie’s ‘The Satanic Verses’…

‘…futilely, Horror tried to rise up from his bed of excrement. The chrysalis skin broke, and the smell almost made him faint. From his neck he retched a yellow waxen glue. Defeated, he lapsed back in his warm prison. During the night, monstrously huge poppies, torture-coloured roses and pain-white petunias had grown around him. At his feet, nettles had sprouted from the dark skein. Weeds muffled the metallic clicking of shite flies. Dung beetles scurried everywhere over the crust’s surface. Neon tubes wrapped in bald flex pushed through the shit and added their burning light to the room. Myriad phalanxes of wasps had taken possession of the upper cornices. They swarmed about the ceiling like dense waves of black hair. For a moment, he thought he was mad, lying with fallen soldiers in the fields of Flanders, Ypres or the Somme…’

‘We’ve been subjected to sharp swings of mood caused by rapid swings in events, as we’ve struggled to keep on a straight course’ admitted Butterworth as the controversy howled around him. ‘We keep having our expectations let down… and then, on other days – or other hours in the same day, our depressions lifted when we receive a jolt of more timeless reassurance.’ 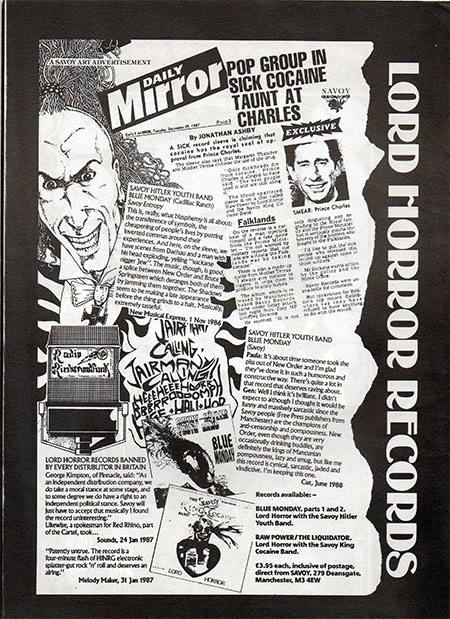 The sinister legend of Lord Horror is worth remembering, and celebrating!

‘…it is all the more important now that we carry on

fighting to lay down the principles we believe in

– and that means, above all, being ourselves.

Fight the apathy. Write what we feel.

AN INCOMPLETE CATALOGUE OF ‘SAVOY’ PRODUCTS:

View all posts by Andrew →
This entry was posted on 5 February, 2022 in homepage and tagged Andrew Darlington. Bookmark the permalink.