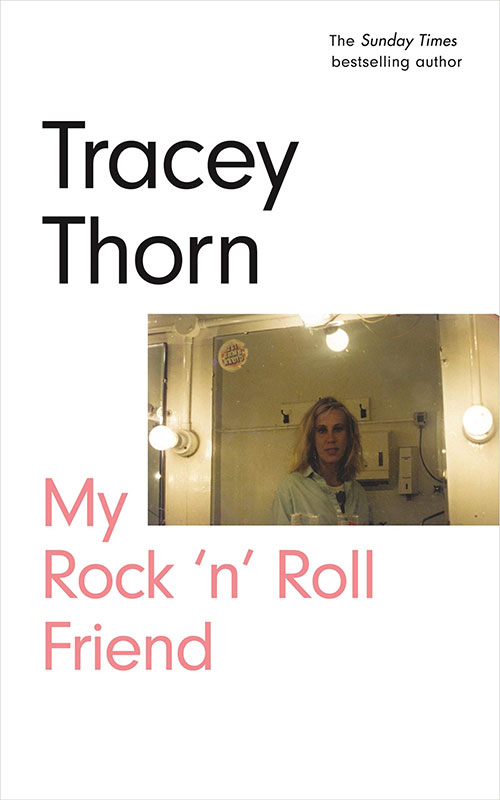 Alistair Fitchett on My Rock’n’Roll Friend by Tracey Thorn.

Tracey Thorn has been on something of a creative roll in recent years, with a steady flow of books, newspaper/magazine columns, and (let’s not forget) a tremendous solo record in 2018’s, erm, Record. To someone of my age, who thrilled to the brittle charm of The Marine Girls, fell head over heels for the sparse yearning of A Distant Shore and then settled into decades of ever-shifting, (nearly) always rewarding records with Everything But The Girl, it has felt like a positive flurry of pleasure. The world may have been going to hell in a handcart, but there’s always been something new from Tracey Thorn to pull us through. Okay, that’s maybe caffeinated hyperbole, but I swear down that on a level it is on the level. And now she’s written a book about everyone’s favourite Go-Between. Stop the world right here. We’ve reached the moment of perfection.

That’s bullshit, of course, because the world is still going to hell in that same old handcart and it’s got some dodgy wheels to boot, so what the… and did you know that everyone’s favourite Go-Between was Lindy Morrison? Certainly everyone I speak to recently is saying as much. And it might be true. It might be that Tracey Thorn’s gloriously celebratory and incandescently incendiary book about her friendship with Morrison has made everyone feel safe and secure about voicing that opinion. It’s like a ‘me too’ moment for Go-Betweens fans. It’s funny though, because almost everyone who I hear saying it is a man, and was probably at some point in their lives a journalist or a university student in Germany*.

That’s a fucking clumsy way of saying the bloody obvious and that is that Life Is Complicated. And ever shifting. Marvellously, excruciatingly so. Thorn gets this of course, and so does Morrison. It’s just that Thorn also knows that if she’s going to write a book about Morrison (who, if she’s know at all is known as The Drummer In A Rock Band Than Never Sold Any Records Except To Three University Students In Germany**) she knows it needs to be something bigger and smaller than that. It needs to be a love story. And so it is.

So My Rock’n’Roll Friend is in essence a love story between two women. But it is also by necessity a love story between women and men; between women and music; between men and music; between people and life. It’s also a story of the love (and hate) between writers and performers (we’ll maybe get into that particular can of worms later). Between performers and their audiences. Even if that audience is only three University students in Germany.***

It is also by necessity a story of pain, mistrust, anger, despair and betrayal. Speaking of which, Forster and Mclennan are in this book too. Of course they are. It’s just that they come across more as a couple of dicks than they do in any other story written about The Go-Betweens. It’s not wholly negative press (Thorn is too canny for that, and anyway, there’s the impression that behind the righteous indignation she still likes the odd Go-Betweens number) but it does throw the accepted worldview upside down rather, and that is fine. Others, Forster included, have written their versions of their stories and we are free to read them. That’s the way our world works, for better or for worse. Multiple narratives weave around us and we pluck the ones we fancy and fuck the ones we don’t. Or vice versa. And sometimes our perspectives on the ones we fancy switch around. So it always was and forever will be.

But ugh, hold up there a minute, because this notion of ‘so it always was and forever will be’ is also the crux of My Rock’n’Roll Friend. It’s a critical hinge point because Thorn recognises it as an essentially patriarchal one, rusty and greased with putrid excrement. So whilst the book is about Lindy Morrison and her life in and around the Go-Betweens, it is also an indignant assault on the macho male industrial machine. Punches are thrown and at times it’s uncomfortable reading (my own refusal to re-read anything I may have written about the Go-Betweens in the past few decades is one minor example of this discomfort). Thorn makes good points forcibly, which is how it should be. (An editor might now suggest altering my line to something like ‘so it always was but need not forever be’, but frankly that sounds a bit wanky and ugh, we’re really not that optimistic are we?)

So if Thorn essentially edits the issues around Morrison’s erasure from the Go-Betweens myth down to one of gender, then that is fine too. It’s an accurate point to be making, and frankly one would have to be blind and stupid not to recognise that. There is another point, however, that Thorn also almost makes, which is around the Rock world’s infatuation with the writer over the performer. Thorn does brush up against this when she refers to the idea that THE DRUMMER IS THE BAND, whilst elsewhere pondering the fact that almost all rock journalists immerse themselves in the lyrics of the songs at the expense of the playing. As a non-musician with an interest in words I can’t help but understand this approach (I’m resisting the urge to write the word ‘sympathise’ because frankly I’m too busy holding my hands up, pleading guilty as charged, it’s a fair cop guv etc.) but when you stop and think about it, it is a bit weird. But there it is. Maybe we really can blame Dylan and the Beatles and The Stones and the Swingeing Sixties for everything. And maybe if Morrison had been a drummer in a Jazz trio, or in a chamber orchestra (do they even have drummers in orchestras, or is that ‘percussion’? See, I told you I was no musician) then she’d have been written about differently. Maybe not.

There is much more to My Rock’n’Roll Friend than rock’n’roll, friendship and feminism of course, but the coffee is cold, it’s getting dark and there are Other Things to think about. Tracey Thorn and Lindy Morrison might be thinking about them too, whatever they are. They’ll be writing and living, loving and dreaming. And the loves and the dreams will by turns be angry, compassionate, frustrated and celebratory because like we said, Life Is Complicated, and we make our sense of it by telling our stories. My Rock’n’Roll Friend is Tracey Thorn’s.

*You probably don’t need to read the book to get the gist of the joke, but read the book anyway to get the joke. It’s funny because it’s true.
** It’s not my joke, so don’t blame me if you don’t get it or if you do get it but don’t find it funny.
*** It’s still funny.

My Rock’n’Roll Friend is published by Canongate.

Tweet
This entry was posted on 10 April, 2021 in homepage and tagged Alistair Fitchett, My Rock’n’Roll Friend, Tracey Thorn. Bookmark the permalink.