Luke Meddings: What They Heard 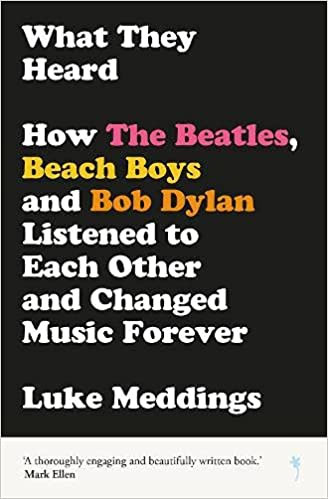 A kind of review by Alan Dearling

There a zillions of books about the music and lives of Bob Dylan, The Band, the Beach Boys and the Beatles. Born in 1965, Luke Meddings has recently offered up his lockdown ’thesis’, ‘What They Heard’, which he says:

“…was largely written during the pandemic of 2020-21, so any time I might have spent in reference libraries was instead spent at home online.”

A bit like Mister Kipling’s cakes, it is an exceedingly strange offering. Luke’s premise commences with the likelihood that the three sets of artists were frequently looking over their shoulders at the music of the others’ output of singles and albums. I suspect that was, and is, true of many musos of every era. The yearly timelines for the musical outputs of each suggests that their music was contemporaneous. Especially those of us born around 1950 – we know that.  It’s also true of the Shadows, the Rolling Stones, Donovan, the Kinks, the Who, the Loving Spoonful and those who became the Grateful Dead, the Byrds and many other groups.

Luke Meddings’ book is possessed of a missionary zeal. He says, “My life, driven like a tuning fork into the September 1965, has vibrated to that era ever since.”  He can certainly turn a phrase, and has unearthed what John Lennon might call some ‘fab’, often random, information. But, at the end of the book, I was underwhelmed with the ‘proof’ of his musical pudding. Members of the Beach Boys, the Beatles and Bob Dylan met each other relatively infrequently, and there was a competitive streak in them all. That’s what partly drives many creators. But, I really suspect, that Luke has assembled a vast array of information, plus his own personal musical opinions on the strengths and weaknesses of particular singles and albums, and then waved his magic wand, hoping that this makes it holistic!

Fundamentally, from my own adolescence growing up and watching and listening to these and other artists, the torch, the creative flame – gets passed around. Black blues masters like Robert Johnson to Muddy Waters; rockers such as Little Richard and early Elvis to the Stones and Beatles, Yardbirds and Fleetwood Mac; fine compositions of words, tunes and arrangements through Woody Guthrie and Tom Paxton onto Bob Dylan and the Beatles, Ray Davis, Donovan, Frank Zappa and Brian Wilson, thence to the likes of Syd Barrett, David Bowie, Elton John, Nick Drake, Grace Slick, Joni Mitchell, Neil Young and Bruce Springsteen. It’s a far more complex web of connections and influences. One of shades and gradations. Not simply of a chart competition for ‘hits’. There are other musical ‘influences’, in particular, Motown and Stax artists, including blues and jazz sounds which added ingredients into the musical melting pot of the 1960s.

What does come through in Meddngs’ book are the influences in society, “the times they are-a-changing”, if you like. The effect of the protest movements around the world, anti-war and pro- civil rights. The experiments with drugs, particularly with marijuana and LSD. There’s a great quote from a ‘Rolling Stone’ interview, where Dylan reminds me/us of how it felt to live through the 1960s: “The early 60s, maybe up to ’64, ’65, was really the fifties, the late fifties.”  We were end of the war and post-war babes, growing up in a much changed and gradually more experimental, but uncertain time. The book is also not very useful on the personal biographies of the protagonists. There are many more substantial sources such as ‘The Lost Beatles Interviews’ (G and B Giuliano, 1995, Virgin), which features some substantial interviews with Julia Baird, John Lennon’s half-sister, which calls into question much of his childhood ‘accounts’, as an only child.

In terms of music, I would suggest that the Beatles really did define the mood of the decade of the 1960s. Dylan provided many potent rallying calls and the essence of beat-poetry. The Beach Boys were much less of an influence, at least in the UK. Their blend of surfin’ music and striped stage outfits felt old-fashioned, until ‘Pet Sounds’ became something of a genuine musical icon, up there with, ‘Bringing it all back home’, ‘Blonde on Blonde’,  ‘Revolver’ and  Sgt. Pepper’. But, apart from tracks like ‘Good Vibrations’ and ‘Heroes and Villains’ – they were primarily a singles’ pop group. The Beatles produced ten years of pop singles, plus lots of carefully crafted albums. And, so it was with Dylan, who was prolific in turning out era-defining and life-changing tracks like, ‘Blowing in the Wind’, ‘Sad-eyed lady of the lowlands’ and ‘Desolation Row’.

What I’m left with at the conclusion of ‘What They Heard’ is a sense of frustration with Luke himself. That’s not a bad thing. He at least got me thinking. He also shares a poetic streak, turning in phrases like, “…immediate as torn lavender” to describe ‘Girl’ from the Beatles. He also provided me with glimpses into ‘stories’ that I’m less familiar with, such as Lennon and Harrison’s KB Discomatic jukeboxes which they took with them on tour – and what tracks they featured – including a lot of Stax, Motown, old R&B, Donovan’s ‘Turquoise’, Curtis Mayfield, and, of course,  tracks from Dylan and the Beach Boys! Two other ‘tales’ are worth a mention. One was Dylan meeting in Paris with German chantreuse, Nico (later with the Velvet Underground), who may or may not have become his lover and travelling companion on a trip to Vernily in Greece in early 1965. She certainly claimed that ‘I’ll Keep It With Mine’ was written for, and apparently about her. https://youtu.be/TcnYkf5nm14

I also found it interesting how much the session musicians in the USA known as the Wrecking Crew, which included Glen Campbell and Brian Johnston, were pivotal in the Beach Boys’ live band, later replacing Brian Wilson in his own line-up.

I’ll end with a quote/review that I’ve just discovered on-line at Amazon reviews. I wrote my review before spotting this. A bit naughty, but not far from my own opinion.

“Those of you who remember Stanley J Krammerhead III, occasional professor of Applied Narcotics at the University of Please Yourself, California, will find much to like in this book. Dare I say it may be possible to overanalyse pop music? As the author says himself, sometimes a chord wasn’t carefully constructed on the principles of classical theory; it was simply what sounded good on the piano at the time.

The Beatles were not divine. Neither is Bob Dylan. Neither (God help us) are the Beach Boys. The whole premise of the book is an attractive one – and hard to gainsay – but the author does try just a bit too hard.”

Tweet
This entry was posted on 15 January, 2022 in homepage and tagged Alan Dearling, Luke Meddings, What They Heard. Bookmark the permalink.