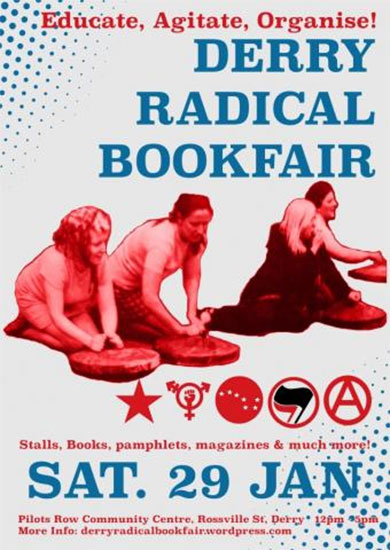 Back with a Bang: The 6th Radical Bookfair to take Place in Derry

“We are delighted to announce that the forthcoming Derry Radical Bookfair will be taking place once again at Pilots Row. It’s now viewed by many who attend to be the rightful home of the book fair, an ideal space right in the heart of the Bogside particularly at this time.

“Last year we witnessed the book fair move online, which opened up the event to a more international audience however, the book fair is about selling books, meeting people, networking and having direct access to a wide variety of radical books from radical feminism, queer politics to anarchism. There is nothing like the type of atmosphere the Derry Radical Bookfair creates and in January 2022 it will prove to be bigger and better.

“The footfall varies from year to year and after last year’s break due to Covid restrictions, people can be assured that we will have the space and environment in line with current guidelines, to allow those attending to explore the host of books and publications on display.

“The 6th Derry Radical Bookfair will take place alongside a series of events marking the 50th Bloody Sunday March for Justice Commemorations. From planned talks, walks and discussions we have no doubt that it will be an extremely busy weekend in Derry. The Radical Bookfair is still one of the country’s largest radical book fair with a wide selection of independent radical press, book sellers, publishers and distributors from across Ireland with a number of participants taking part from Scotland, England and Wales. A very important focal point for many and firmly part of the city’s political calendar.

Tweet
This entry was posted on 15 January, 2022 in homepage and tagged The 6th Radical Bookfair. Bookmark the permalink.