Posted on 18 June, 2022 by Lawrence Freiesleben

– On the road between Arnside and Lancaster 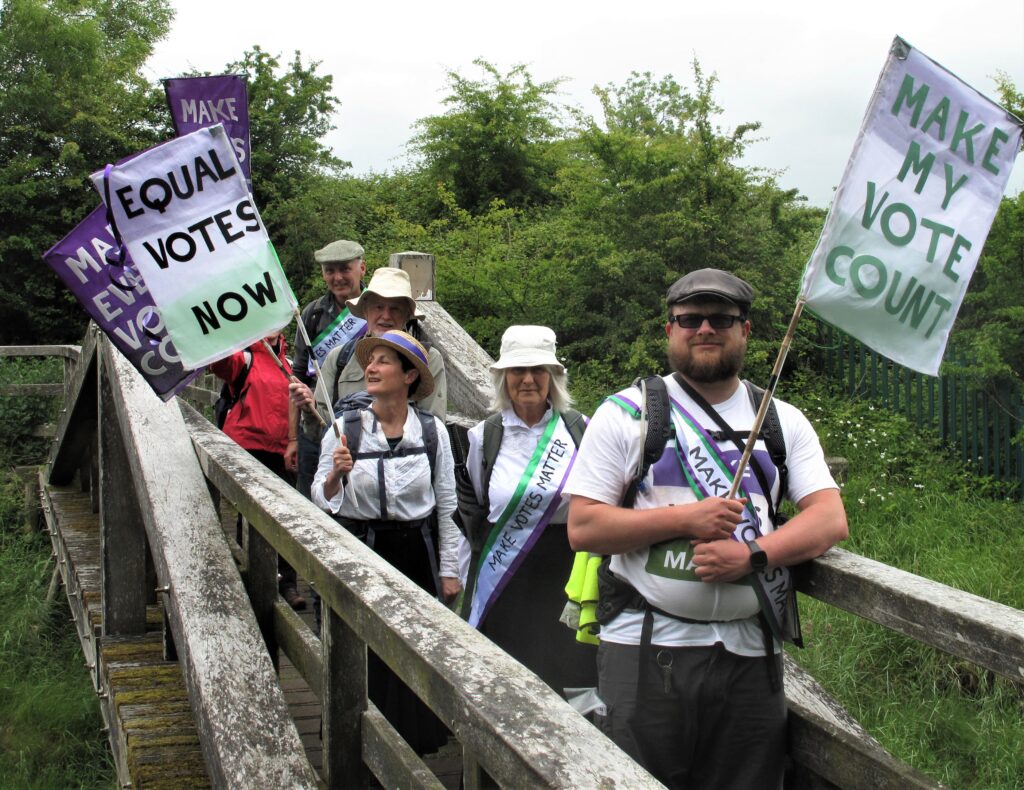 “The UK is in crisis . . . Our broken voting system cheats most voters and Parliament doesn’t reflect the way we voted.”  So say Make Votes Matter[i], the national movement for Proportional Representation, and who can possibly disagree?  “We urgently need to make seats match votes, with a good voting system, chosen by the people. Most people and parties agree.” 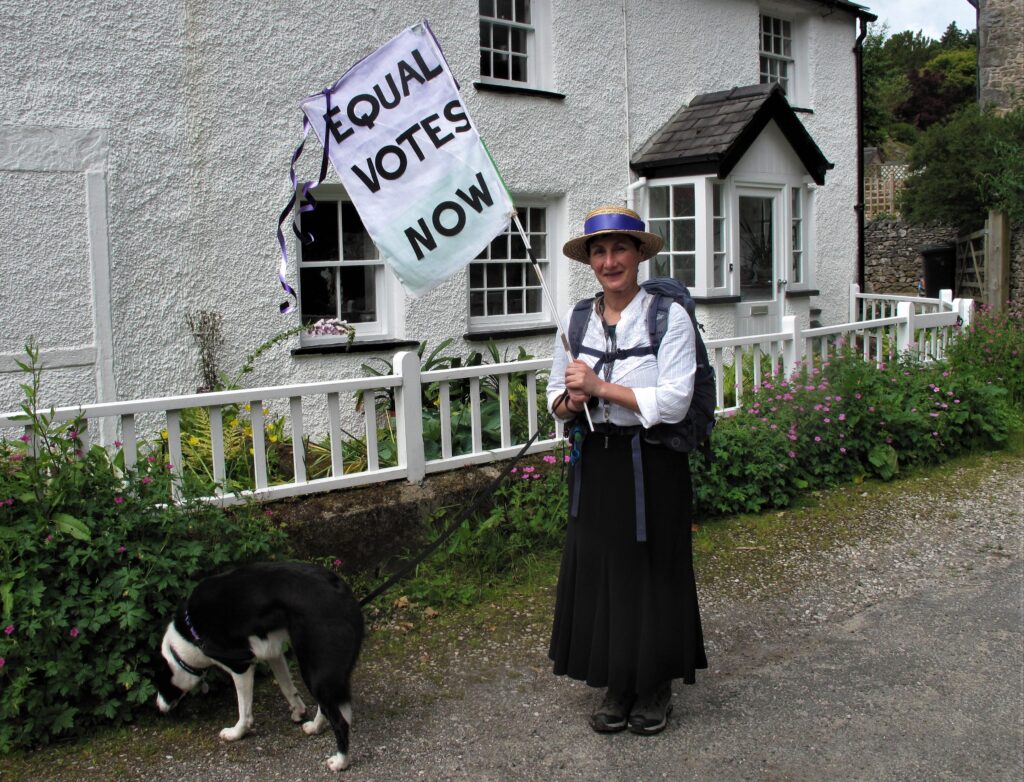 Jo Stocking in suffragette clothing[ii] on the edge of Silverdale, 9th June 2022

Following the example of the Great Pilgrimage[iii] organized in 1913 by National Union of Women’s Suffrage Societies[iv] or Suffragists (not to be confused with the Suffragettes[v]), over a hundred years later, Make Votes Matter (MVM) are retracing part of the ‘Watling Street Route’ (from Carlisle, Manchester and North Wales) of that UK-wide march, to campaign for a long-overdue reform of our voting system. 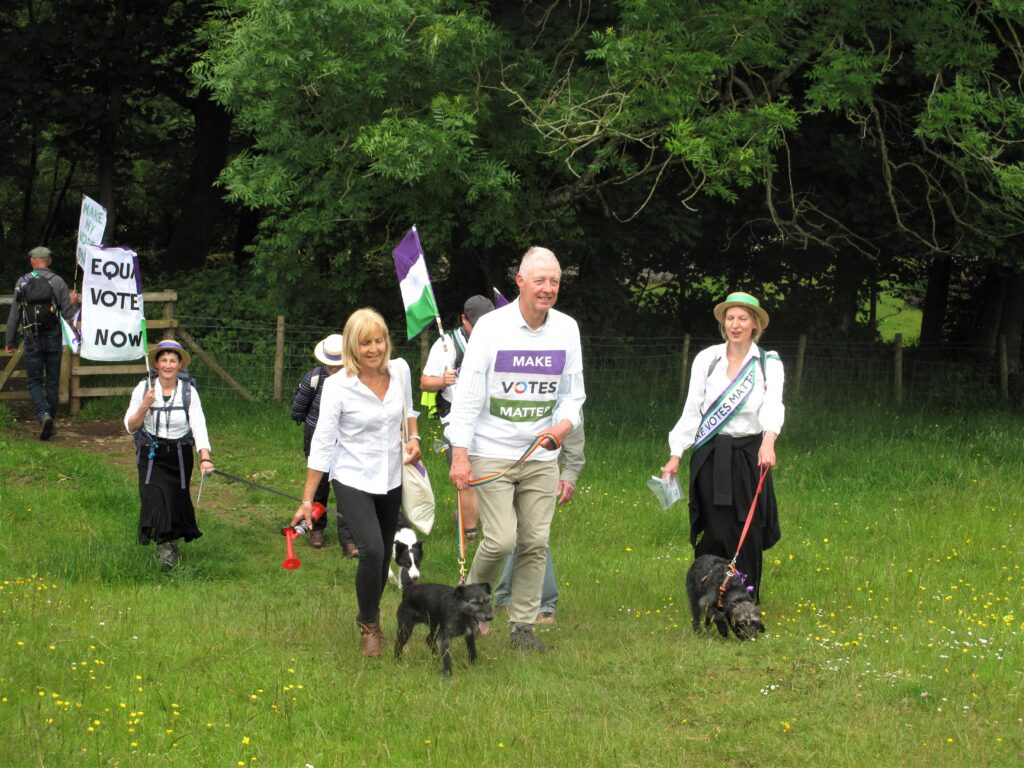 Pauline and Stephen Hesketh – with Libby the Patterdale terrier – along with Colette Bain, lead the way from the woods, 9th June 2022 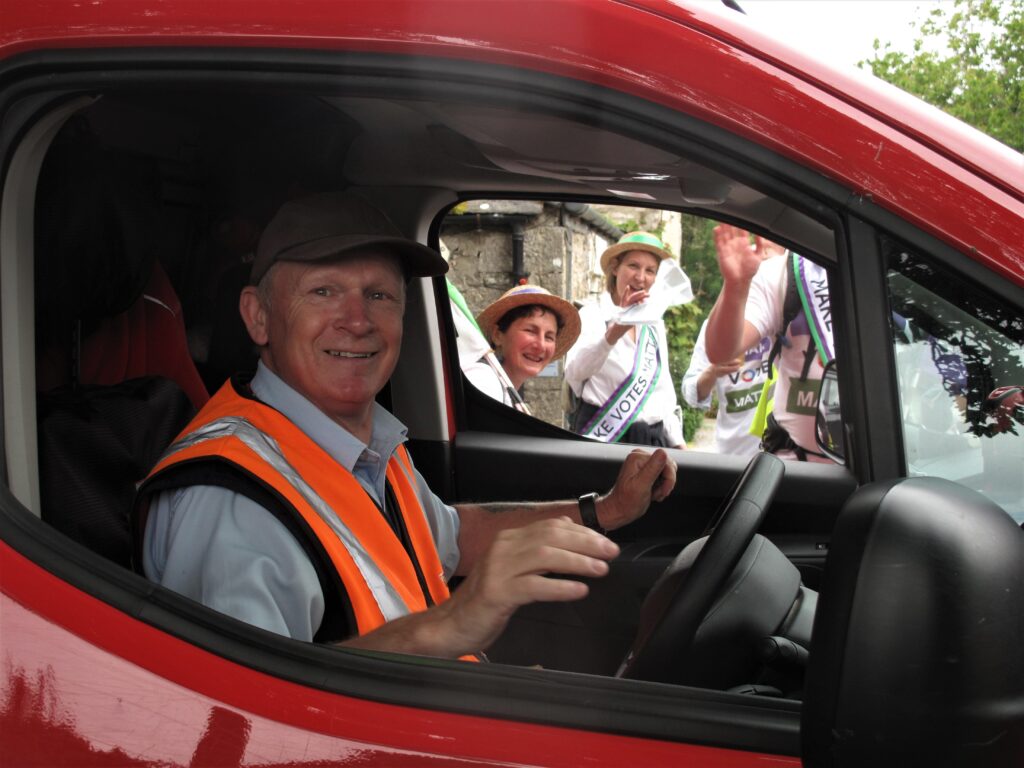 As I well know from personal experience, our present electoral system is hopelessly outdated. In 42 years, only twice have I been able to vote for a candidate or even the party I wanted. In all the other constituencies in which I’ve lived, my only choice was to abstain or cast my vote tactically. When so many votes are clearly wasted, people – especially the less fortunate – are bound to feel disenfranchised . . . to feel that voting isn’t worth the bother. 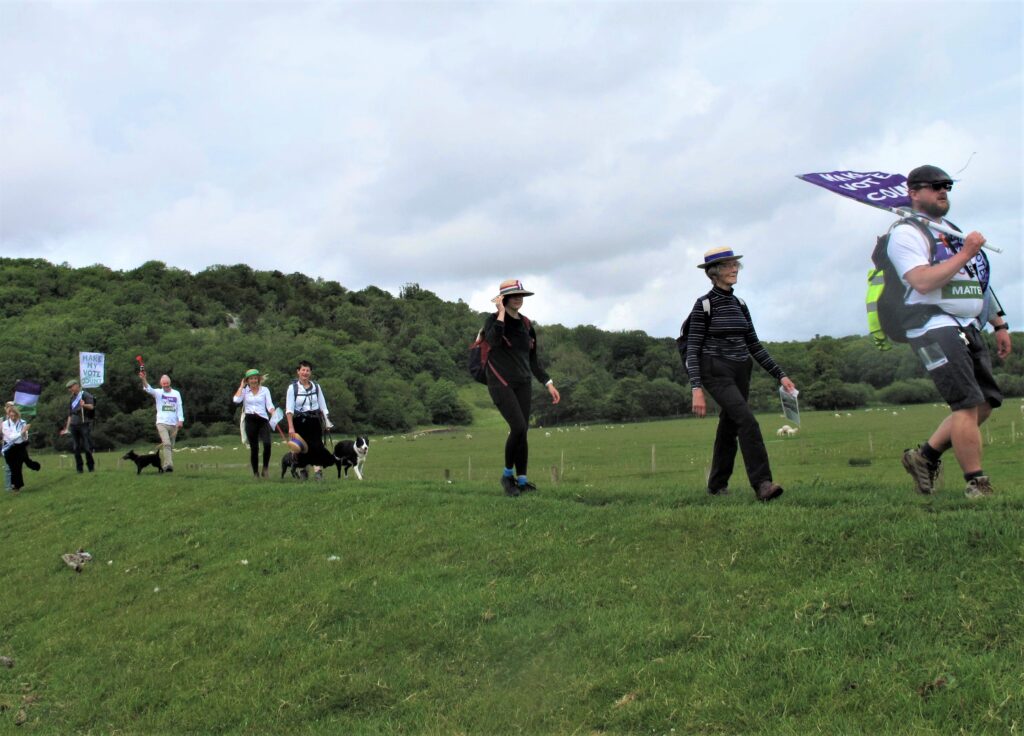 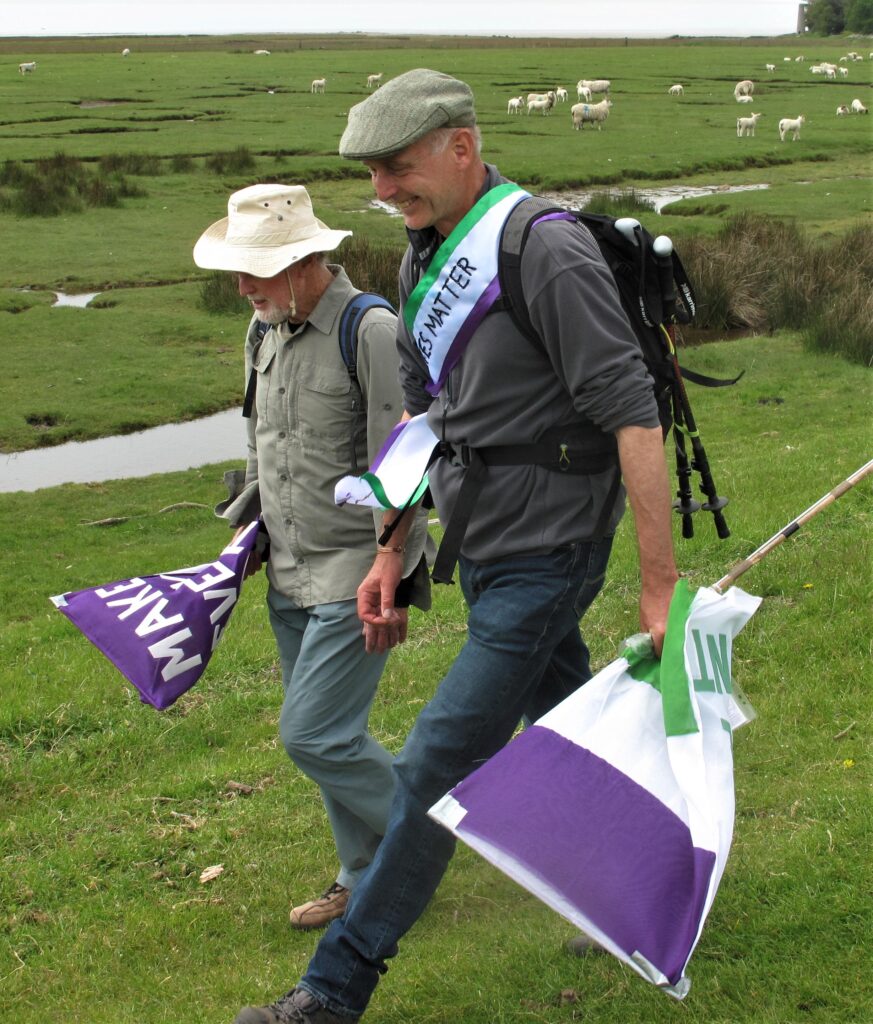 Two MVM supporters cross Quaker’s Stang discussing an overlap in their pasts. The chimney near Jenny Brown’s Point is just visible in the right distance.

Taking a circuitous route from Grasmere to Preston over six days, I tracked the progress of MVM’s march via local news and a friend’s television. At the beginning of its fourth day, cycling north from Heysham to rendezvous with them, my destination was Carnforth, followed by Silverdale and the woods above Elmslack. After a sunny start through Hest Bank and Bolton-le-Sands, the breezy weather became more overcast. 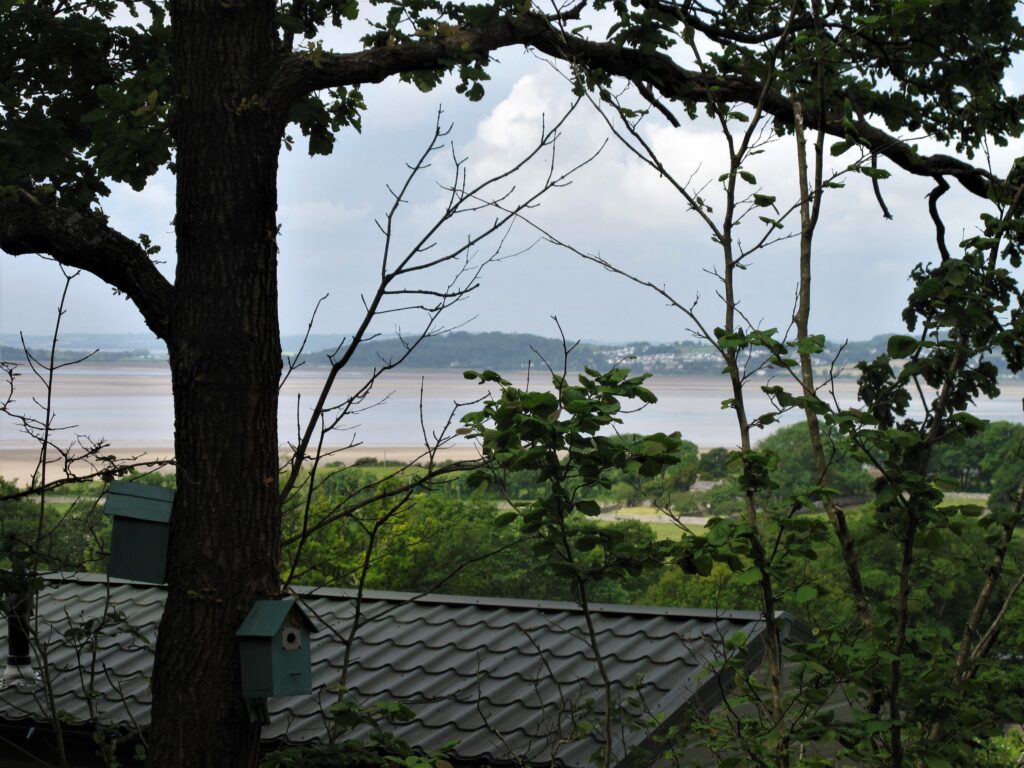 Morecambe Bay with Kent’s Bank across the estuary, 9th June 2022

Climbing through the woods along the footpath to Arnside tower, upmarket caravan parks with views of Morecambe Bay, conceal themselves in the trees. After a mile or so the marchers came into sight. Leaving Arnside at 10.00 o’clock they had made good progress. 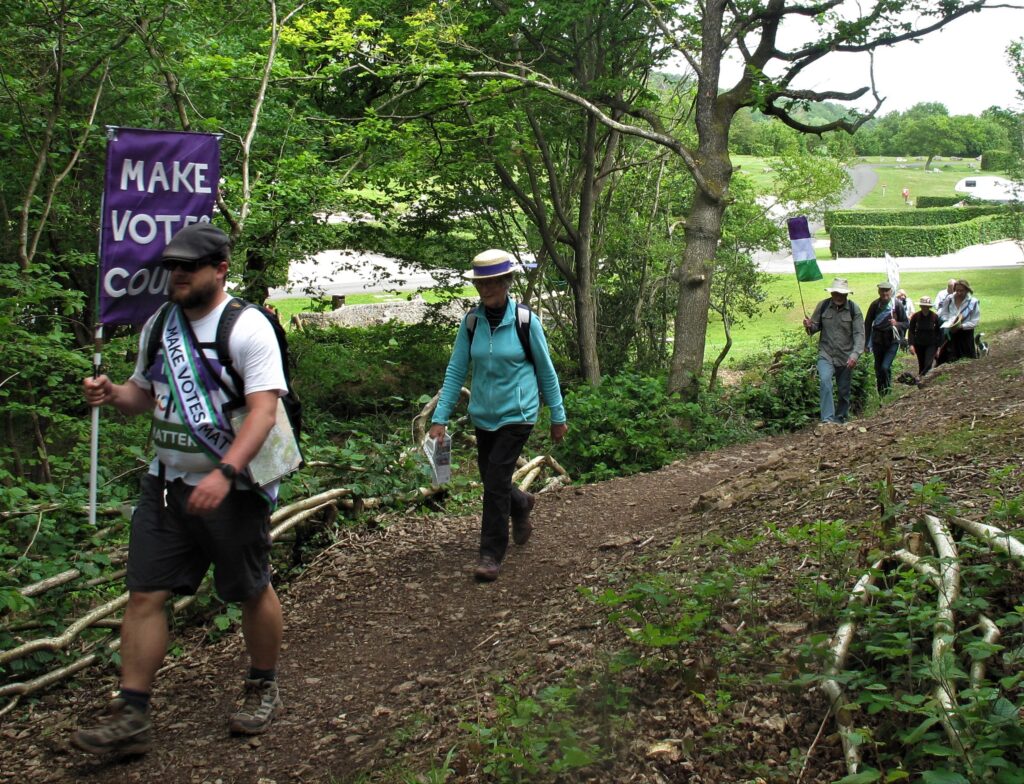 Middlebarrow Plain: rendezvous in the woods above Silverdale, 9th June 2022

Proportional Representation, an idea which goes back at least as far as 1776 when John Adams proposed a form of it in his Thoughts on Government, during the American revolution[vi], has seemed the obvious choice for democracy since before we debated it at school way back in the mid-1970s. After almost another half century former anxieties about the instability of certain forms of PR have been ironed out[vii]. Why are we still waiting? 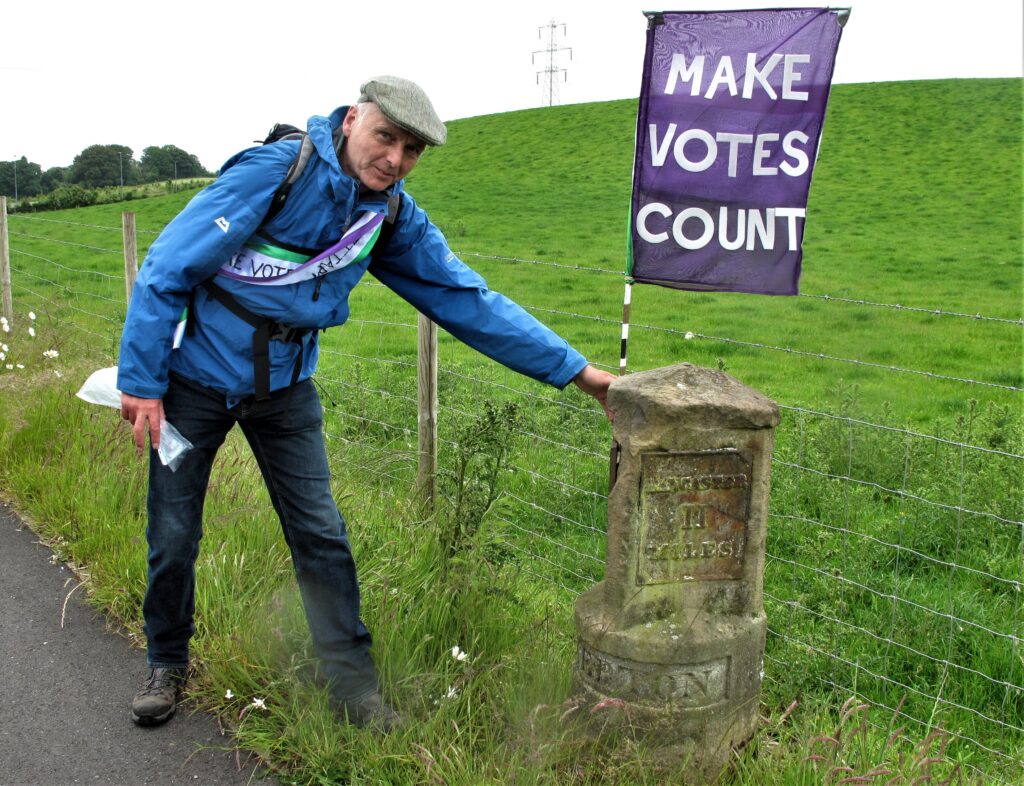 Old milestone to Lancaster, much later in the day, 9th June 2022

At Warton our small but merry band stopped for lunch on the triangle green formed by Mill Lane and Sand Lane. On the grass, our lively conversations were enormously enhanced by big slices of a wonderful home-baked cake[viii] made by Jo’s partner, Richard. Here several members had to leave us . . . but luckily, reinforcements had arrived – one forthright lady in particular proved indefatigable at interacting with passing members of the public. So much so, that Jo and others became convinced she must already know them all! 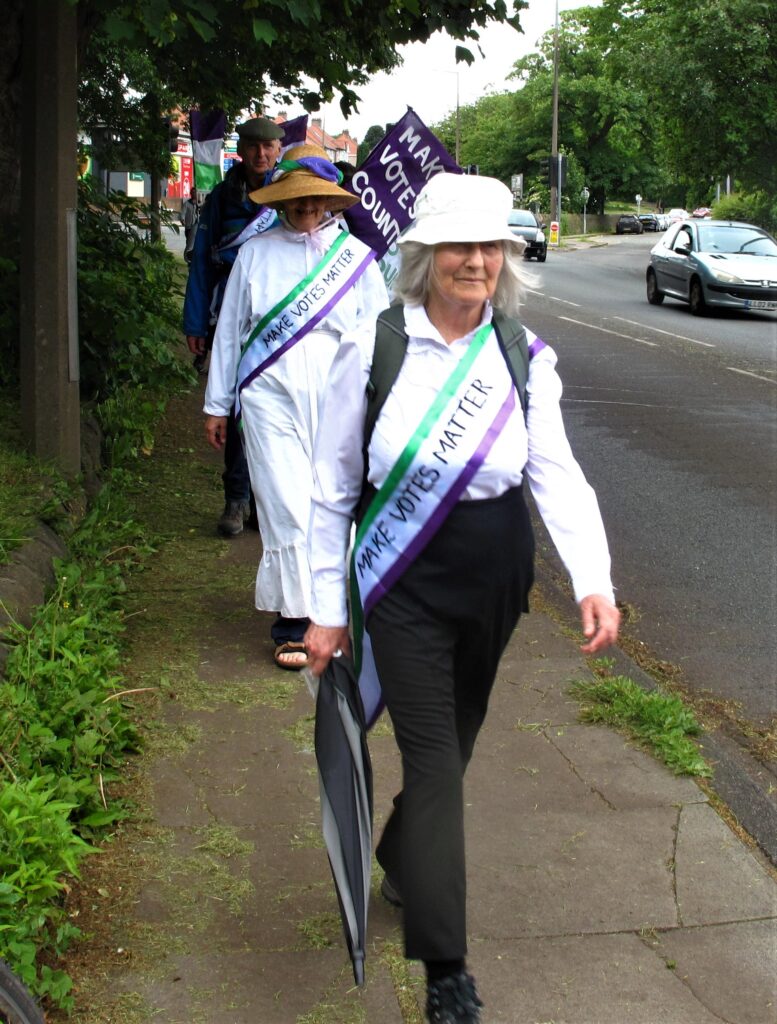 A determined MVM member strides the eastern edge of Rylands Park, Lancaster . . . the message will be spread regardless of apathy or rudeness 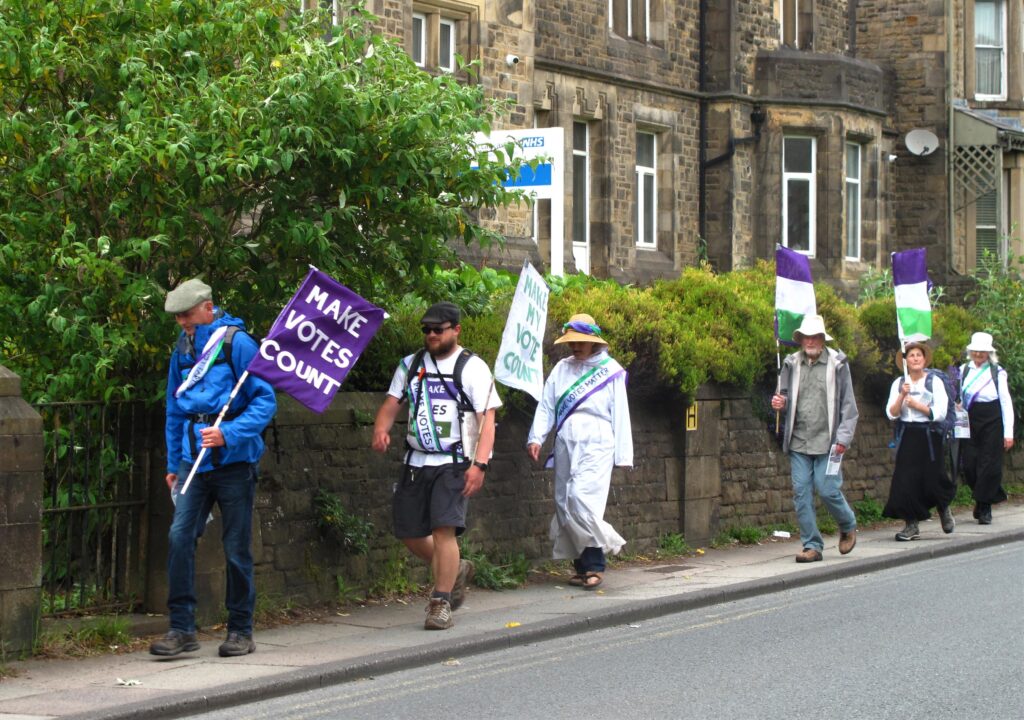 Back between Warton and Carnforth, I’d thought again[ix] of the quote attributed to Benjamin Franklin that “Democracy is two wolves and a lamb voting on what to have for lunch.” 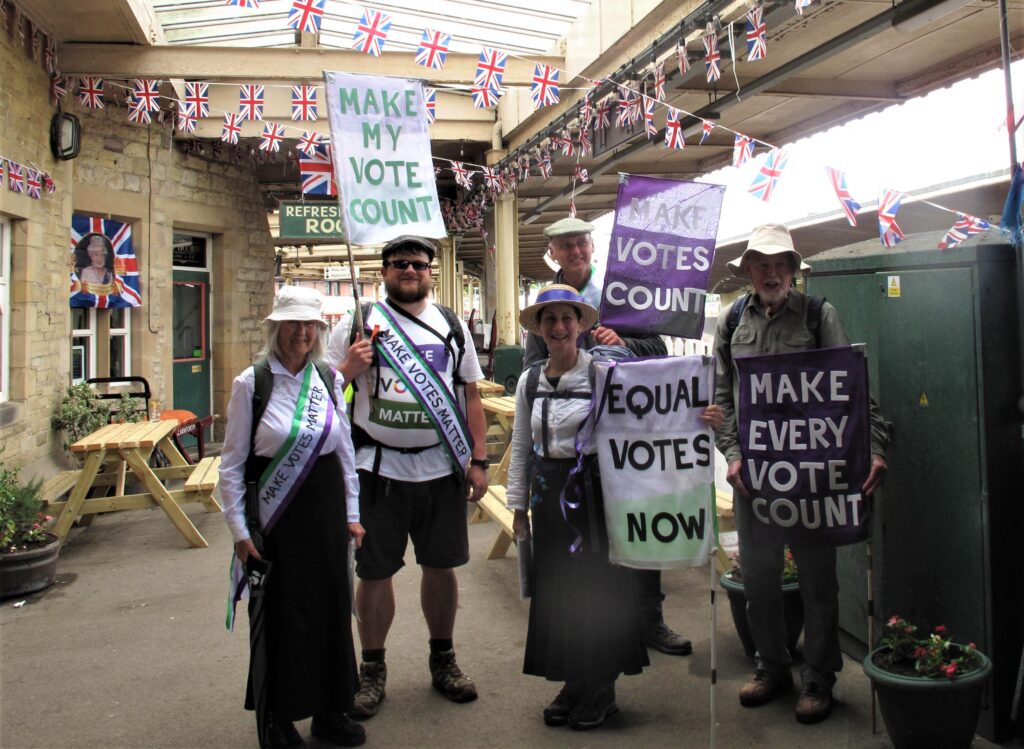 As we took to the canal for the section of busy road between Carnforth and Bolton-le-Sands, our indefatigable reinforcement from Warton was harangued by an elderly dog-walking man, who seeing the suffragette clothing and the banners[xii] shouted out: “What’re you creatin’ about. Go home! You got the vote 100 years back.” Determinedly, she tried to explain, but as was rarely the case en-route, her efforts were to no avail. “He’s always got the MP he wanted and doesn’t care about anyone else . . .” 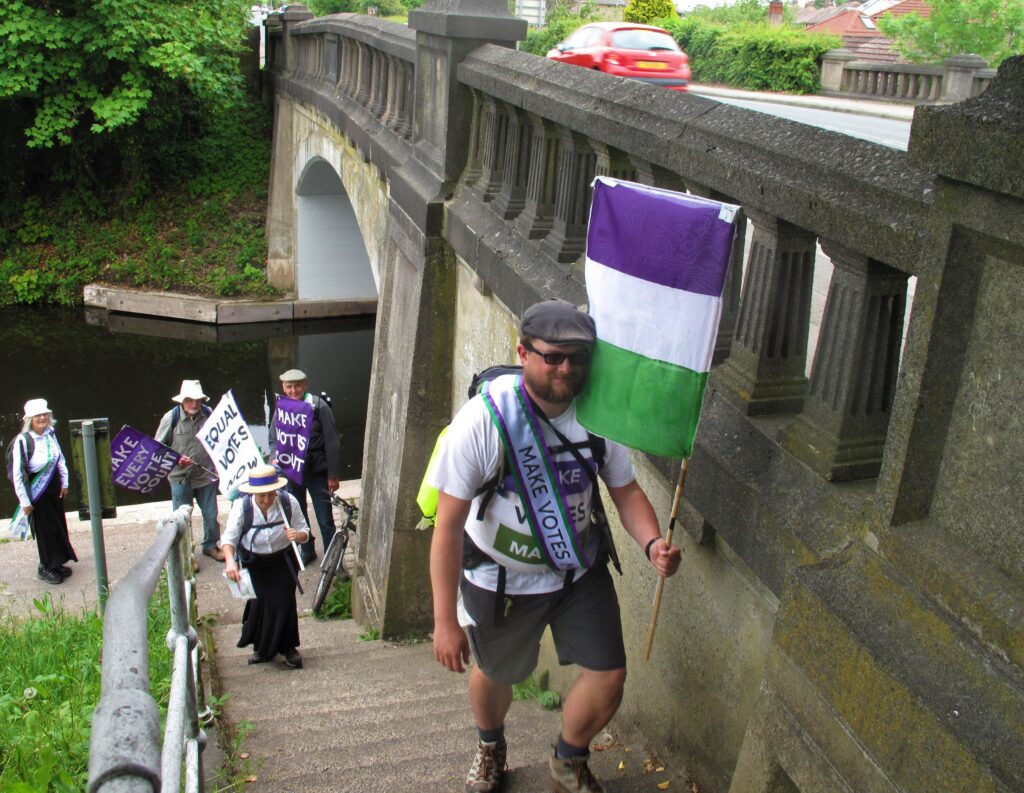 Returning to the A6 in Bolton-le-Sands. 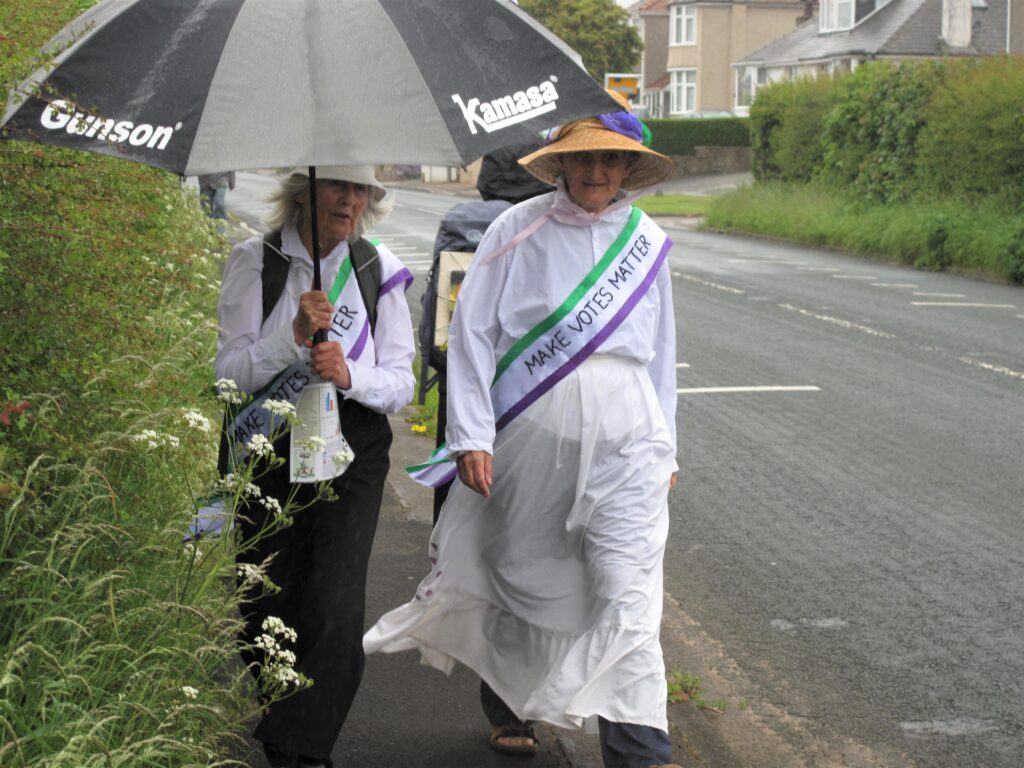 Some of the marchers had other ways to combat the moderate precipitation . . .

Passing through Slyne-with-Hest using the pavement of the A6, the cloud thickened and for a while the rain came down. Most of the marchers were not used to walking so far and at 15 miles, this fourth day, was the longest. Some paused to don waterproofs, but others had alternative ways to combat the precipitation, and the friendly toots and waves from cars – from drivers who’d maybe seen news reports on local television – only enhanced the morale. Unfazed by the rain this MVM member travelled to the march on the bus dressed as she appears here – partly to draw other passengers into conversation. Slyne-with-Hest, 9th June 2022 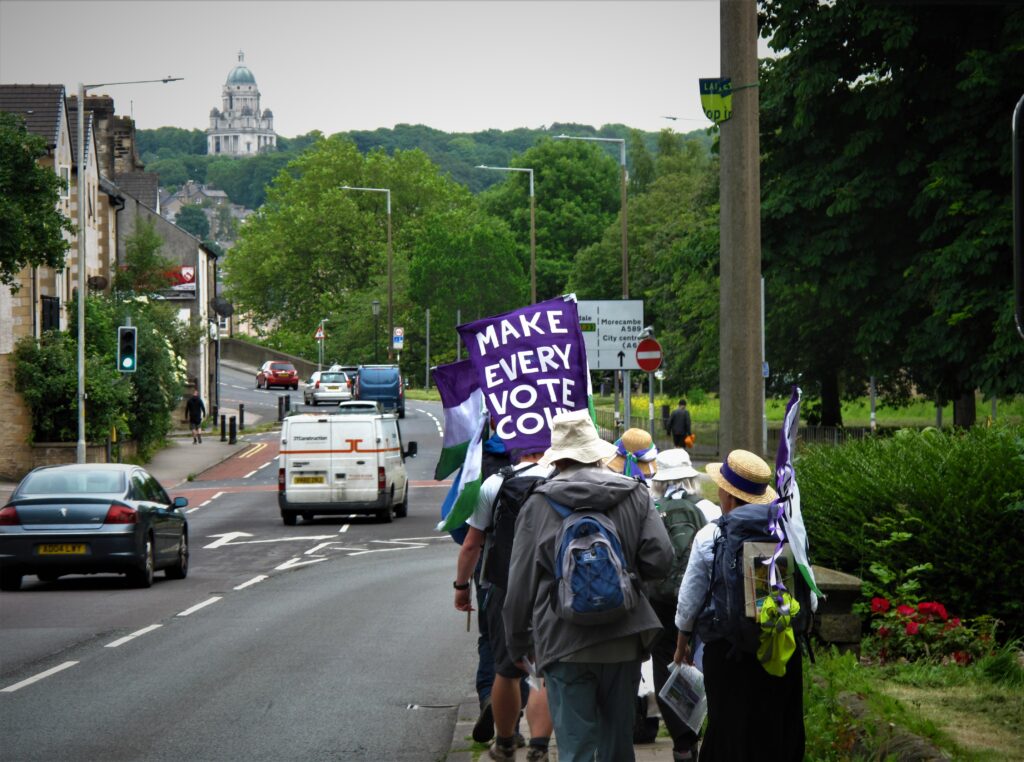 With the Ashton Memorial[xiii], “Lancaster’s most iconic building” prominent in the background, the band of marchers approach the older crossing of the river Lune, Skerton Bridge[xiv], first completed in September 1787 – and now carrying vehicles ten times the weight of the heaviest it was designed to support . . . 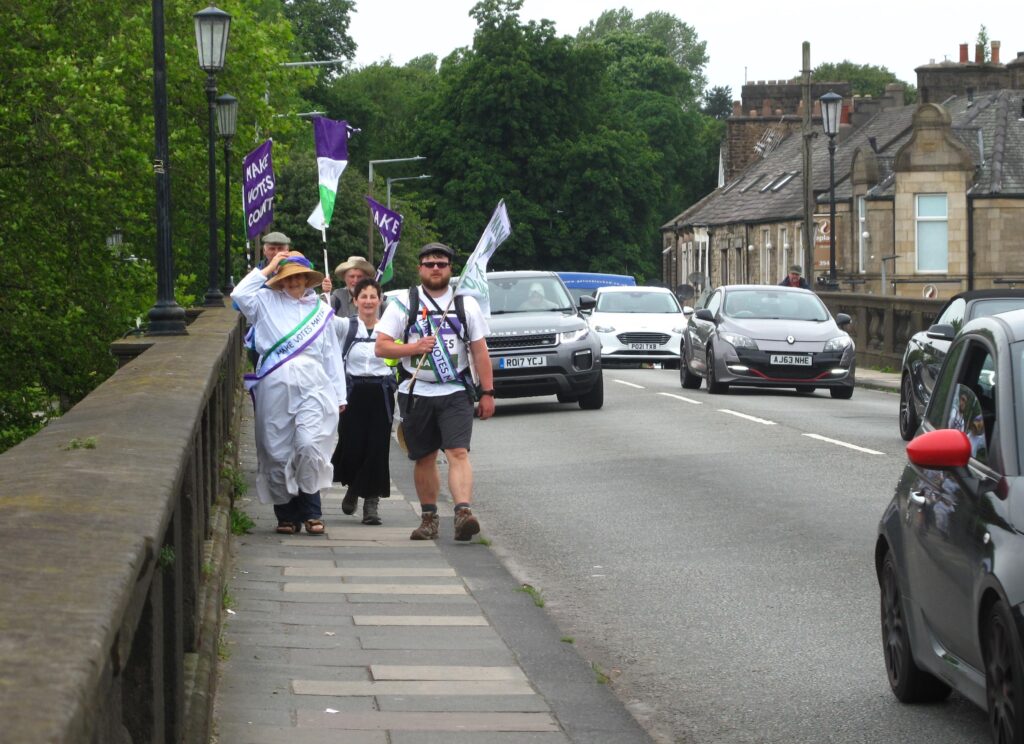 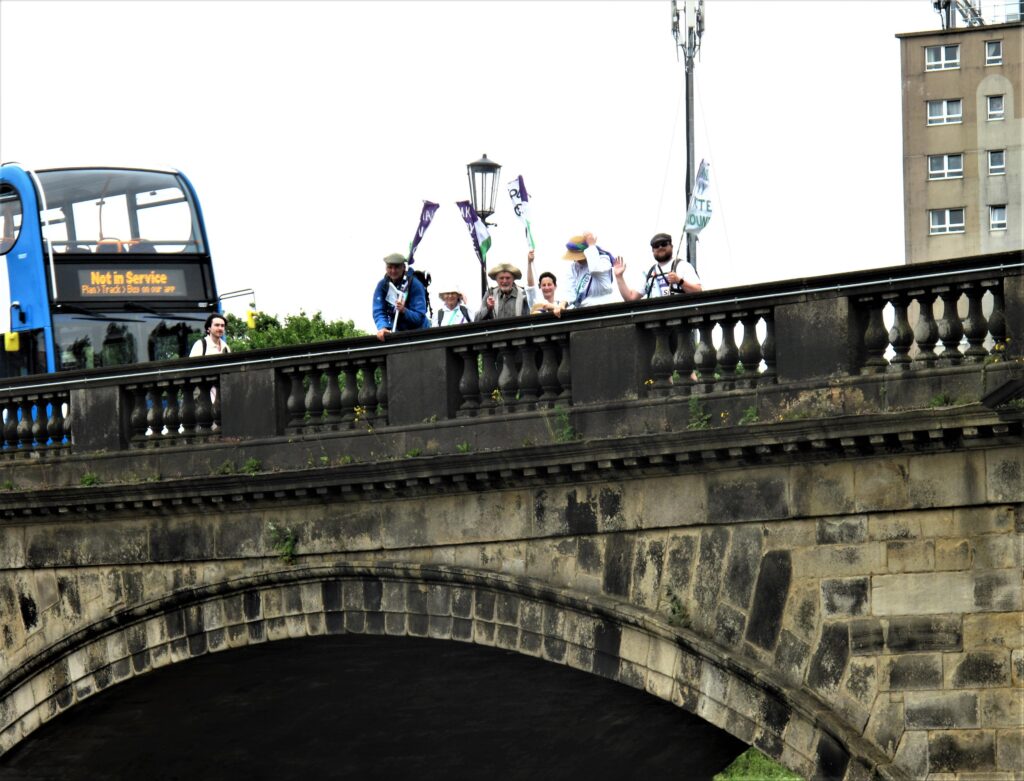 Once in the city centre, progress was slowed by more frequent encounters with interested members of the public: 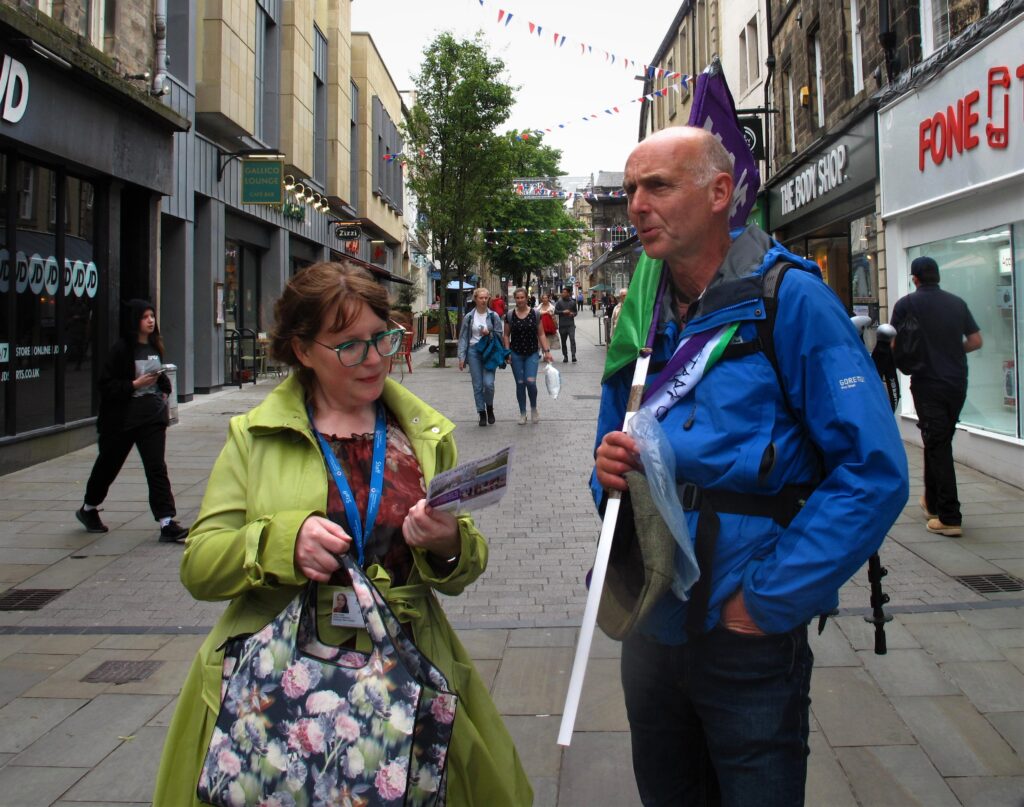 “Proportional Representation?” questioned the lady on the left –  “You mean like all other civilised countries in the world have?”

Thomas Jefferson[xv] – sceptical, like Benjamin Franklin perhaps – is said to have described democracy as: “Nothing more than mob rule, where fifty-one percent of the people may take away the rights of the other forty-nine”. Whether or not this quote is correctly ascribed, without Proportional Representation, our so-called democracy doesn’t even require fifty-one percent of the vote to trash the rest of us. 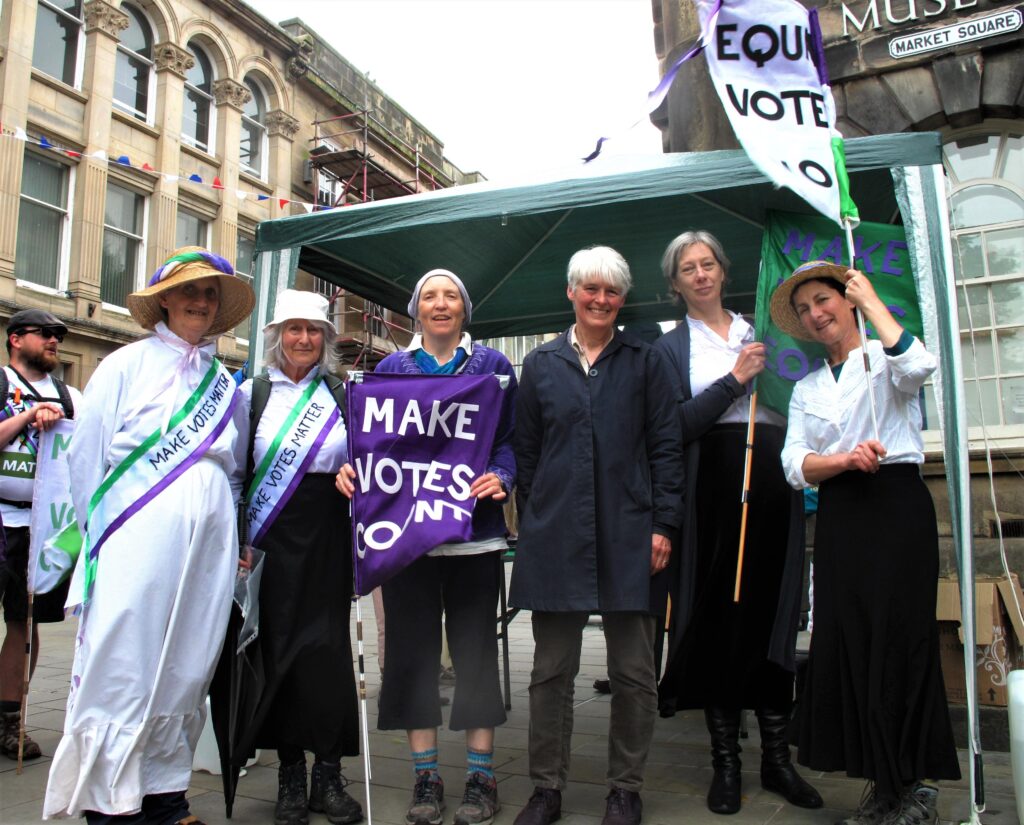 Market Square, Lancaster, end of day 4 . . . and among the group waiting to greet the marchers is leader of Lancaster City Council, Caroline Jackson of the Green Party (third from right). The next objective for Ali, Jo and the other stalwarts, was Garstang and finally Preston . . .

With the obvious slide towards fascism embodied by a handful of hardline fanatics within our current government[xvi] (one of the latest horrors contained in the Home Secretary, Priti Patel’s rehashed[xvii] Public Order Bill[xviii], for example, being the idea of electronically tagging innocent people to keep them from demonstrating[xix]), it becomes more important every day that all our votes should be made to matter.  This government isn’t the first whose abuses of power hardly reflect their own supporters, let alone the electorate.

If you want to support or sign Make Votes Matter’s petition, it can be found here:  https://www.makevotesmatter.org.uk/sign-petition

NOTES    All notes accessed between May and June 2022

[iv] See: https://en.wikipedia.org/wiki/National_Union_of_Women%27s_Suffrage_Societies  The NUWSS was renamed in 1919 the National Union of Societies for Equal Citizenship.

[v] Many consider the less militant, National Union of Women’s Suffrage Societies, of Suffragists, in the long run, the more influential group[v] – but like the Great Pilgrimage, their existence seems to have faded into history, leaving the dramatic tactics of the Suffragettes perhaps forming the agreed narrative in most people mind?

[viii]  A Victoria sponge with cardamom and a rhubarb, rose and cardamom jam filling.

[xii]   The letters on the banners were die cut by one of the volunteers at Ragtag Arts and Community Scrapstore, https://www.ragtagarts.co.uk/  (which is how I came to hear about Make Votes Matter’s 6-day walk – when my wife, who works there, met Jo).

[xiii]   https://en.wikipedia.org/wiki/Ashton_Memorial  “built between 1907 and 1909 by the millionaire industrialist Lord Ashton in memory of his second wife, Jessy.”

[xvi]  Though this is my own opinion, it was shared by most of those I talked to between Silverdale’s woods and Lancaster Market Square.

View all posts by →
This entry was posted on 18 June, 2022 in homepage and tagged Lawrence Freiesleben, Make Votes Matter. Bookmark the permalink.