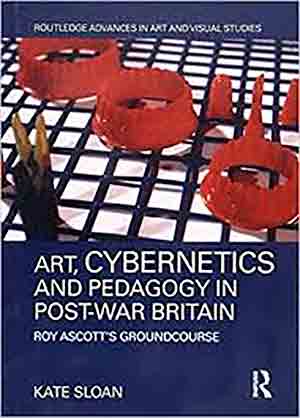 I came across the work Roy Ascott whilst reading about Brian Eno, who was taught by Ascott on his art foundation course. Ascott seems to have had a huge influence on Eno, who at the time was developing the idea of cybernetics within teaching and fine art.

This of course was postwar and cold war, informed by ideas of codebreaking and surveillance, and emerging ideas of analysing and learning from data and knowledge. Cybernetics is one way of thinking as everything connected and with reciprocal cause and effect. We might think of this to do with computing, but the art courses Ascott ran at Ealing and Ipswich colleges predated the emergence of affordable or home computers: these courses used games, performance and emerging ideas of multimedia events to explore cause and effect, personality and group dynamics, with students having to use materials available to them, often by skipdiving, recyling or scrounging.

With these lo-fi materials, Ascott and his students explored ideas of self and team work, learning how to think, assess, question and work together. The course drew on the Basic Design and other art courses already taught in the UK, which themselves were inspired by and took ideas from Bauhaus concepts of good practice, craft, skill and how to use materials.

Ascott, however, was just as interested in questioning power and subverting it. Students would pass or fail, based on attendance: experience was prioritised over results. Staff and students learnt together, provoking the unexpected through (sometimes extreme) interventions and ideas. Students often had to undertake long-term personality changes through role playing, working on what they or other students regarded as weak or overbearing (eg talking too much, nervousness, being good at ideas but not making things). So students might find themselves restricted physically, or only allowed to speak when asked; or forced to finish projects when they were prone to interfering without following through. They were asked to adapt and change in response to others, learning new skills, also changing themselves and the group as they did so.

This wasn’t just a project for an emerging art elite back in the Sixties though. Kate Sloane’s new book shows how these teaching and learning experiments had a wide effect, initially through happenings, concerts and performances by the Who, Eno, Pink Floyd, Mark Boyle, and many others (including many International Times events) but also influenced design, emerging technologies, game design and computers. It was part of a worldwide exploration at the time that attempted to link everything together, a world that embraced ideas of the time such as Earth mysteries and ley lines as much as quantum mechanics, computing and the social sciences.

There are, if one chooses to be optimistic, signs that education may be returning to some of these ideas, although at the moment university teaching is often cloaked in ideas of ‘reality’ and ‘preparedness for work’ (that is the world according to neoliberalism and capitalism) and less in play or self-exploration. Cybernetics may sound cold and uninspiring, but it’s one way of stepping back from the mundane and thinking about cause and effect, ourselves and others, how we learn. When we do that, we can start to learn for ourselves, and feeding our inquisitiveness and creativity, is what makes us human. Kate Sloane’s book may be an academic one, and you may need to be inventive in finding the money for the exorbitant cover price, but it is immensely readable and informative.

View all posts by Rupert →
This entry was posted on 13 July, 2019 in homepage and tagged art, Cybernetics and Pedagogy in Post-War Britain: Roy Ascott’s Groundcourse, Kate Sloane, Rupert Loydell. Bookmark the permalink.