Listen-in to ‘many lives lived’ in the Art-Zones: Martin Frost in conversation with Alan Dearling

The vanishing art of Fore-edge painting: 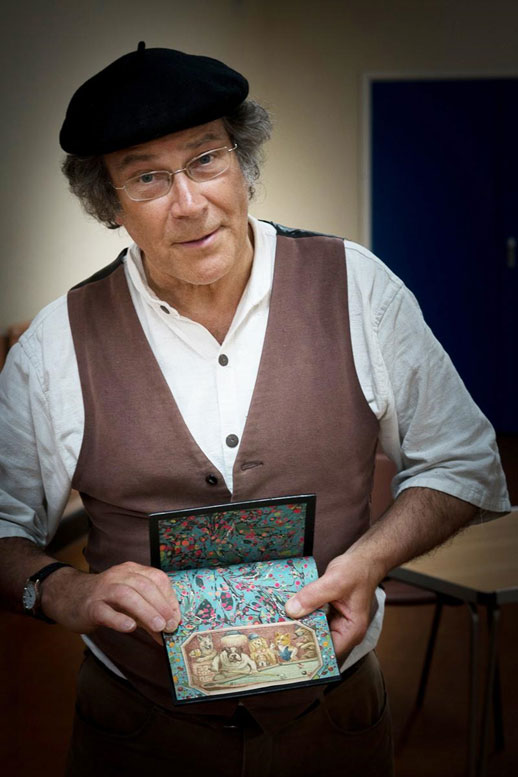 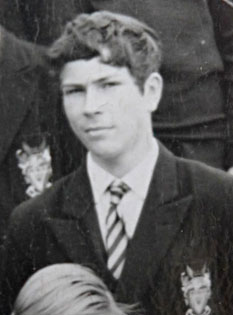 There was always something quirky and mischievous about Martin. He wanted to be more naughty than he really was. And that was just during our school years in and around Bognor Regis Grammar School in the 1960s. He went on to become a world-renowned artist. Indeed he is virtually an ‘endangered species’, as the last professional Fore-edge painter in the world! He’s also a committed, err, umm, Morris Dancer!  Here’s a recent chat I had with Forever Young, Mart, who is based in Worthing in West Sussex. 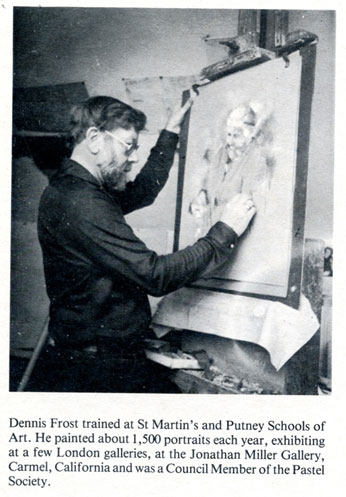 Alan: Beginning, as they say, at our mutual beginning, we were in the same year at school. Two forms – about 60 pupils in the year group. That was at Bognor Regis Grammar School from 1962 (and Bognor Regis School – an enormous comprehensive for the final two years). ‘Boggie’, the infamous seaside joke town on the West Sussex south coast of England. We shared quite a close group of friends, including your brother, Tim, and his mates. We were both fairly arty, involved in local theatre, school magazines etcetera…What are your most abiding memories?

Martin: BRGS was a brand new school, although one of the last of the Grammars, and benefitted from quite a few (but not all) enthusiastic teachers.

As so-called ‘arty Marty’ I got involved with the school magazine, the stage productions, decorations for the PTA socials and secured a reputation for my less than flattering caricatures of my fellow pupils. At weekends I would work with my dad, Dennis, in his portrait studios at local holiday camps, mounting and framing his 30 minute sketches. When it got really busy I would don a black beret and set up another easel alongside.

Alan: Neither of us were liked by the art teacher, Mr Porch. He hated the fact that we liked doing detailed illustrations and cartoons and caricatures – which you were especially good at. Your Homework Diary sketches were legendary amongst your fellow students! What were your favourites from that time?

One of the pages from my Homework Diary Alan: And you went to Worthing Art College…was that on theatre design?

Martin: Having gained insufficient O and A level grades for a degree course in architecture (although I am really better suited to the craft side of building) I swanned into an Art Foundation course in Worthing College of Design who only required sight of a half-decent portfolio. As a professional artist my dad had always encouraged me to draw and paint so that was easy. This course was amazing, as it gave me an opportunity to play at print making, textiles, photography, industrial design, pottery, graphics, sculpture as well as the conventional drawing & painting. It also had a well-established Theatre Design department with access to workshops for sets, props and costumes and connections with Worthing’s Connaught Theatre within spitting distance of the college buildings. The Theatre staff were an interestingly colourful bunch, as were many of the other theatre students, so at the end of the course I signed up for the two-year college diploma. I even tried a bit of acting with a performance of Becket’s one-hander, ‘Krapp’s Last Tape’, with a self designed and constructed set. My fellow students gave me the obligatory ‘kind’ reviews but later heard that it was more Crap than Krapp.

With the offer of a job prop-making at Glyndebourne Opera House I bunked the last term and spent that summer season playing with lots of lovely materials and tools on some lovely projects and some very ‘luvvie’ people.  As the House was so far from any town we stage-monkeys were housed in Nissen huts in the estate grounds, so the life there was pretty hot-housed! Weekend trips back to the family home and my girlfriend’s flat was via my Isetta bubble car that really struggled with the hills around East Sussex. The contract finished with the opening of the season and I found myself seeking another local job to stay close to Carol, who I married soon after. Theatre work is unstable and the pay is lousy so I joined the paste-up team of a local newspaper, learnt the basics of the trade and moved to heading the art department of a small printers’ firm in Emsworth.

Alan: You were a young dad, living in Littlehampton, and a neighbour of yours was Don Noble, who made a part-time career creating Fore-edge paintings, which were ‘sort of’ forgeries on antique books? You got involved too and began to learn the craft…

Martin: I had met Don when we both were painting sets for the Littlehampton Youth Theatre. I was intrigued that there were commissions to be had for his weird magical vanishing book edge paintings, so I hawked round one of my own to the local and London antiquarian bookshops (remember them?). The work was not very demanding or strenuous and just needing a table, a chair and box of paints. Along with the day job it helped with paying the mortgage. With our daughter Rachel starting school and Carol returning to her science work, I took the plunge as full-time stay at home dad/Fore-edge painter. Alan: Your own dad, Dennis, was great fun to be around and he’d become a full-time artist by the time you left school. I exhibited with him a couple of times. This was an early cartoon you jointly produced with dad.

Alan: At what point did you start signing your own Fore-edge paintings on old and rare books?

Martin: For the first 30 years I decorated antique leather bound volumes supplied by the trade who only wanted classical picturesque scenes appropriate to the age of the books. Identifying the artist wasn’t encouraged, however, I would discreetly add my monogram somewhere in the composition and have done on all 3,500 books I have painted. 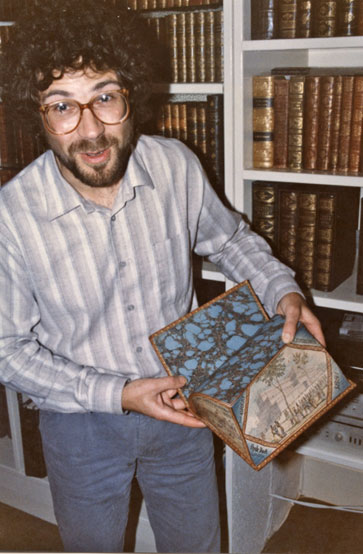 Alan: I think you also developed your own skills in book-binding and also links with the antiquarian book trade around the world?

Martin: The market for ‘antique’ book edge painting crested around Year 2000, but I now undertake book-binding and gilding and can handle just about any sort of book.  Commissions to teach and lecture have taken me all over the UK, as well as the US, Canada, Norway France and Holland. 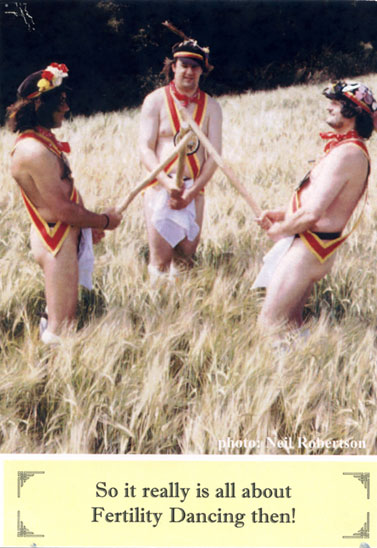 Alan: Meanwhile, I think you began to get involved with Morris dancing. When and how did that come about?

Martin: Studio painting is a pretty inert and unsocial activity, so I do a bit of dancing with the Sompting Village Morris. We get to patronise all the local pubs and have performed at many UK and European festivals.  Being one of the seniors (almost 30 years) I am now allowed to brandish the Fool’s pig’s bladder rather than caper in all the dances.

Martin: A few years back there was a fashion for producing Naked Calendars which was an opportunity for us to strip down to our bells and baldrics raising money for our local hospital. Having printed and sold over 1,000, I keep an eye on ebay in case a copy surfaces. Alan: What about the musical side of Morris – has it introduced you to some interesting music?

Martin: A few years back some of us dancers and musicians found ourselves featured in one of Dizzee Rascal’s pop videos for ‘Dirtee Cash’:

Recently we have also created a rather curious Lockdown video:  https://youtu.be/F9YrMqtx_C0

Alan: I guess there must have a point in your life when you moved from being a Fore-edge book illustrator to being the ‘last’ professional purveyor of the genre. When was that, and what publicity did it lead to? You’ve done a lot of interviews for magazines, newspapers and TV and radio. You’ve certainly developed the quirky side of your character! 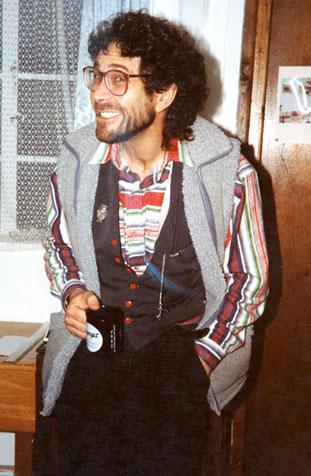 Martin: Fore-edge painting by its very nature is a hidden book art and doesn’t lend itself to being displayed or mass produced. However over the last twenty years I have been evangelising the art with magazine, press and radio articles, videos and features in many TV programmes. The Heritage Craft Association have included Fore-edge Painting in their red list of endangered British skills, which helped my nomination for an MBE for sustaining the art. The Queen reckoned my work was ‘jolly interesting’… but she didn’t order any!

Alan: Returning to us. We’re now both 70. Real Senile Delinquents. What’s still on your bucket list?

My current enthusiasm is posting my archive photos on Instagram, so there is a record of one painter’s work in this very quirky British bookart: 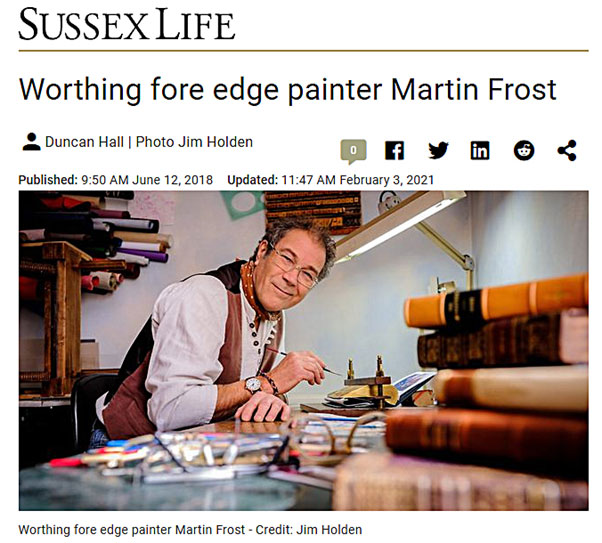 You might also be interested in this very neat video that my daughter, Rachel, put together earlier this year:

Tweet
This entry was posted on 22 May, 2021 in homepage and tagged Alan Dearling, Martin Frost. Bookmark the permalink.