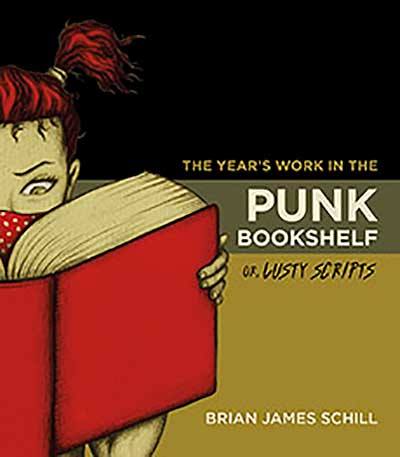 Schill’s new book is blurbed as ‘the story of the books punks read and why they read them’. Unfortunately, this is not true: it’s actually a book about an imaginary world where punks read these books and give meaning to their world through them, a cultural studies book where Schill reads punk through the lens of a selection of hip and cult authors that a few articulate punks – such as the members of Sonic Youth and Patti Smith – have mentioned and referenced.

These are, of course, pretty much the expected list: William Burroughs, Genet, Baudelaire, Henry Miller, Kafka, Artaud and Nietzsche with the interesting addition of Philip K Dick and Dostoevsky. Really? I hear you ask, Dostoevsky? Oh yes, sprawling moralistic novels were on every punk’s bookshelf next to their philosophy section – didn’t you know? Burroughs’ books were definitely around in the alternative bookshops and stacked with the zines in Rough Trade and other hip record shops (even London’s Virgin Records) in the 70s. But if the excesses of the disturbed theatre theoretician and extreme poet Artaud or the Superman theories of Nietzsche were known it was usually secondhand via the drug-fuelled ramblings of stars such as Bowie, or pretentious asides by rock hacks posing as cultural critics.

It’s a shame really, as Schill occasionally offers the reader informative and perceptive criticism of musicians such as Pere Ubu, Suicide and Cabaret Voltaire. But he also namechecks Billy Childish as though he were popular or important, a peculiar cross-Atlantic misreading of UK music, which occurs throughout the book. The book offers a very far-ranging, and peculiarly American take on punk. Surely Nirvana heralded the grunge era? Weren’t Devo art-rockers? (They certainly weren’t punk.) And although Patti Smith and Television were associated with punk and CGBGs, they weren’t punk either, any more than Pere Ubu (art rock again, maybe postpunk), Suicide (mutant rockabilly provocateurs) or Cabaret Voltaire (DIY electronic cutup funkateers) were.

Linking music and lyrics back to cult authors is easy; it is also bad academic practice. Because someone’s lyrics are about violence and so is someone else’s story, novel or poem, doesn’t mean there is any direct link or influence. Sometimes, of course, there is – some musicians clearly read and are articulate about inspiration and appropriation, but it doesn’t mean their audience will go and research the source material! Schill claims to write about ‘punk’s literary and intellectual interests’ but I suspect that these were mostly the NME and Sounds, gig posters and the back of record covers, perhaps some Crass handouts or booklets. This book is pretentious academic twaddle, a theoretical misreading of an important music movement that should be discussed on its own terms, in relation to its own product and culture, using only appropriate contextual material.

View all posts by Rupert →
This entry was posted on 25 October, 2017 in homepage and tagged Rupert Loydell. Bookmark the permalink.