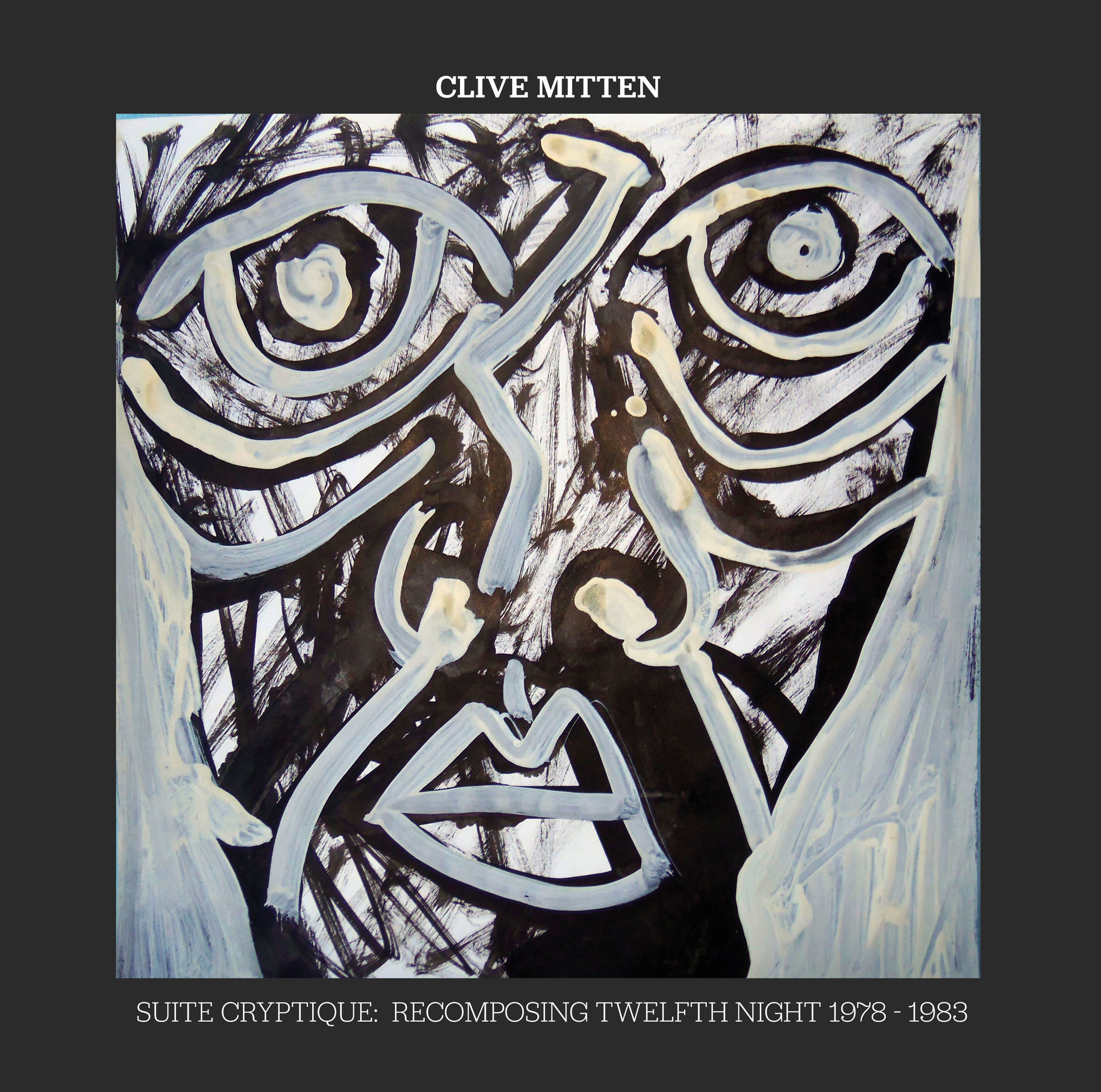 Clive Mitten’s youth now kid-gloves the hold his earlier music
Has on him.  As Twelfth Night’s main composer, his hands now leap
Into leather as he composes this new Advent-overture, comprising
The seminal albums they made, Mitten uses a symphonic approach
To find fanfare, celebrating a band whose width broadens, as through
New music, the group is graced by revival, restoring first, then enduring

As the death of the dream receives care. Here, then, are their first
Three vinyl albums, preserved; fused by fugue, elegiac, and yet mined
For the power and for the rock hewn classicism of songs that began
Without words, as Mitten, Devoil, Revell and Battersby sang
Through playing, and the dextrous textures engendered
Rise from this record to cover us all in sound Fur (Helene).

Mitten channels Reich and Wagner and Glass, Beethoven, Bach,
Adams, Mahler, a  virtual supergroup of composers to whom
He tuned to, as the first lockdown allowed his forty year dream
To take shape. And we hear it all first as a dream, as the sweet,
Low strings come to claim us, resembling a beast freed from burden;
As if from another Caliban’s cavern, the themes of Live at The Target

Are stirring as we are moving through leaves on dark islands
With all of the authority of slow apes. Mittens sleeve notes describe
The specific method and means of his process; from something
As brief as a two note phrase: variations, building to crescendo
As the recomposition transforms the sounds young men set
And which the older releases, as if from song structure those early

Homes for music and art were seen again from the viewpoint
Of a concert hall’s ornate doors. Andy Revell’s rippling guitars
And Mitten’s own torrent of bass, crest before us; Brian Devoil’s
Strong percussion has been whirlpooled within this sound swell,
As Rick Battersby’s keys unlock the strings’ captive beauty,
And what was rock rolls before us, claming a sweeter shore

Through Clive’s spell. Mitten is not just holding the themes
But also the sounds of band members; echoing a bluesey guitar line,
Or the arc of a synth through the air, he also Stravinsky’s away
With his condiment named string ensembles, as a clatter
Of guitar and drum patterns are batoned and caught
With real care. This is not the Orchestral Twelfth Night,
This is more like the Thirteenth and Fourteenth, in which

Evolution is sequenced again for life’s room. The seminal
Sequences stands like a beacon of light in chord darkness
As its majestic sense of mourning and of warning too, sweetens
Doom. The songs sing once more with a ghosted voice sent
To serve them, vocationally leading the way for the vocals
That would evolve once more this first life. For when

The much missed Geoff Mann joined Twelfth Night
The play as cast became epic. Sequences gained stunning lyrics
And the God fed genesis they soon followed created song poems
That surpassed Supper’s Ready and that other group’s Stagnation
And Knife. The bar had been raised and taken with it the ceiling
Which now speaks in new language as Live and Let Live takes

The Stage. Mittens bass runs are marked by the scrape of bows
Across Cellos. The themes soar as organs soon overtake synth stoked
Rage. Geoff Mann’s worshipful Church is returned as each revoiced
Verse is sent skyward, and in 22:58 all the fervour of this live album
Sounds graced. Shards of the classic We Are Sane are then caught
As the collision of words and sin stung notes form and feature

As The Ceiling Speaks once synthed fanfare is curled across staves
And replaced. The End of the Endless Majority’s guitar lines, nimble
As they were and unearthly are here prayers and poems rewritten
Within Mitten’s hands, who talks once more with Geoff Mann,
Sadly now beyond reply, to grant honour to the songs sewn together.
In this new fabric and form, God’s star lands. Beauty burns through

The disc and sings here SO sweetly. In a pitch and tone rising
Beyond the confines of the ear, and on and upto a place
Where tenderness meets the mighty. Mitten’s Cryptic Suite
Becomes simple: it softens trouble and is a soundtrack sent to stall fear.
The Collector returns with all of the scope it first offered. A much
Prized track, which after leaving, Mann returned once more to record.
The ‘Kingdom come’ thus returns, refleshing the bones that birthed
Structure with orchestral strength slicing this formative song, like a sword.
Musical dust fills the air, as a sense of self duly rises; snatches of song
Formed and chorded as gusts of Geoff are felt, heard,
And the stately theme fills the space and the power and shape
Reconfigure, as this bassist of note finds the basis for the proper

Re-evaluation of words. What an achievement! What feel!
And what technique used discreetly. As ‘tumeric’ violins, drums
And oboes and the plucking of bows bow and prance. Mitten
Has used his Lockdown to release the past as a phoenix.
His collection of that time clearly captures as well as contains
Circumstance. Disc Two continues the tale as Fact and Fiction

Is essayed. We Are Sane’s high note intro becomes a spreading
Of light across sound, as something like Brian’s batterie is now placed
Where only vocals once featured, before electronic signals usher
The epic in to astound. And then remind us that this was the song
By which Twelfth Night were distinguished, a genuine equal to those
From the decade before they began. The ‘Meanwhile, reports’

Section, sans words becomes a glittering squall of music, a tinkling,
Tainted tincture for a death sore throat and mad plan. It is a magical
Imagining primed by sound and still full of fury, with strings at once
Furry as well as sounding spiked and alone. And so the variations
Await, from World Without End to This City. The Poet Sniffs a Flower
And bends to find that a tree has now grown. Under Clive Mitten’s

Control, he conducts his past and friends grandly to reach further places
And other spaces, too that sound owns. What was strident  is graced.
And what was tender, romantic. For there is love here and laughter
Spent by men in their twenties who in their sixties can remember now
And still hear. And within that enjoyment, comes ours as we discern
The craft they first practised. From Piano to woodblock, from humour

To drama, from Viola to verse; songs held dear. The supremely
Talented friend fans and family have long lost, is revived through
Sound shadow, as Mitten replaces Mann’s singing with artfully judged
String sourced lines that link the left behind to the last and to Mann’s
First true album with them. In which the fact of life meets death’s fiction,
Which Clive has re-written. For all that is recomposed remakes time.

The proof of this finds its form in what has here been refashioned.
The older strings teach a lesson to the tyro synths of the past.
The title track Glockenspiels or maybe Marimbas. Its insistent pop
Pulsing, a fretwork of chimes and wood blasts. The stirring sound
Sauces all and one can practically taste the flavours of the rhythmic
Sensations and progressive dance we once grooved for in 1982.
Now beauty burns through, sliding as said, through the others
Until the final Love Song which was Geoff Mann’s Psalm to soul
Truth. Here then is Rock Album as Suite, with sounds to soothe
And gift sugar to the darkness of death and fate’s sea.
A man in command of the ship sailing towards new horizons
Is also someone to fathom as the storms of chance swelter;

But Mitten in daring the cup, still tames tea. And this record
Is a form of elixir for sure, a sensitive balm before Creepshow,
Which returns us to the horror of the experiment where we’re
Flayed. This song has such power and place; Geoff Mann’s unkind
Theatre, in which human desperation was artfully voiced and conveyed.
Now, song is mist thickening as we listen and the stark soundscape

Is threatened and scraped and displayed.  Mann’s distant ‘Welcome’
Is plucked, as the ghost writhes in the chamber. A sense of strange
Grace also settles, but this is still a play of bright blood. For there
Is a shock to the strings as the clatter of drums introduces, spiked,
Stung staccato that echoes Bernard Hermann and all of Psycho’s
Shower flood. Mitten’s hands lose their gloves as the grown-up touch

Now takes over the source of this horror before a Ska-like rhythm
Kicks in! Suddenly, the Creepshow becomes Creeps’ weekend party,
As Clive the sardonic finds a tonic for Science and a once depraved
Doctor’s sin. It is a charming surprise nearing the end of this double
Feature that does all a suite can to bring comfort to those who miss
Furniture.  As the music we loved in our past formed the shape

Of the places we sought to live lives in, forgetting that time
Will transport us to other unexpected rooms and strange doors.
There is a real accomplishment here and it is a gift of love
Mitten’s given. Hold his hand and Band members in the highest
Regard. They’re in here. From a trapped present day, Clive’s
Cryptique is clear headed. Geoff Mann returns and sings through it.

And so it sings back..notes as tears. 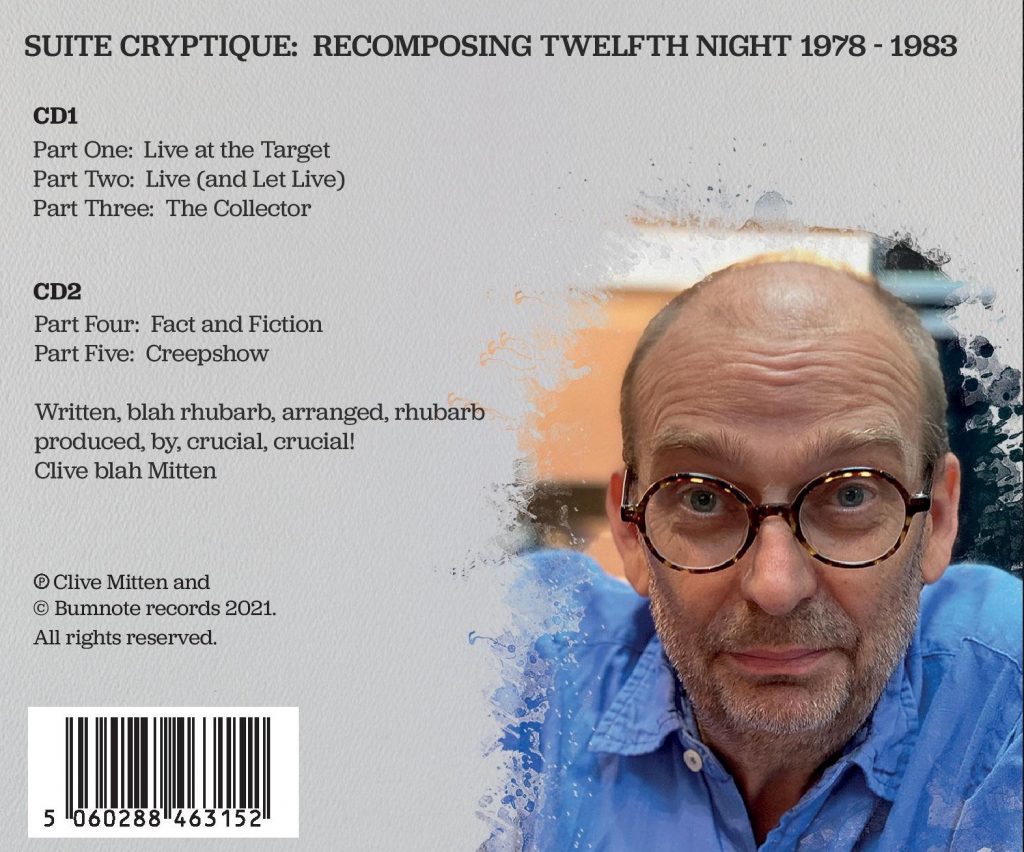 CLIVE MITTEN’S SUITE CRYPTIQUE: RECOMPOISING TWELFTH NIGHT (1978-1983)
Disc One:
Part One:          Live at the Target          [25:30]
Part Two:          Live (and Let Live)        [22:58]
Part Three:        The Collector                  [20:13]
Disc Two:
Part Four            Fact and Fiction            [32:32]
Part Five:            Creepshow                    [17:38]
Clive Mitten writes:
‘I had for some forty years wanted to revisit the early years of Twelfth Night.  I had it in my head that I could do strange and wonderful things with the music.  Then on 23 March 2020 the first lockdown occurred and I was off.  From the outset I planned this as a “cinematic orchestral” album, a style that I had been developing for the last five years.  Musical influences?  Reich, Glass, Adams, Bach, Beethoven, Wagner, Mahler.  That makes me a “post-minimalist” or “need to get over myself”. This is not a covers album. Re-composed means taking fragments or larger pieces of tunes and rethinking their purpose from the most basic notes.  Some tunes are more or less aligned to their original structures – some confuse the structures.  Things move around.’
The CD booklet contains comprehensive sleeve notes explaining the concept of the album, and fascinating details of the new structures and instrumentation used. The cover painting is one of a number of sketches former vocalist Geoff Mann made in 1982 while Twelfth Night were recording the Fact & Fiction album.
Release date: 2nd April 2021.
Catalogue No. BUM004.
CDs available from www.twelfthnight.info
Distribution: by RSK https://www.rskentertainment.co.uk/
Digital copies available from https://clivemitten.bandcamp.com
And https://twelfthnightuk.bandcamp.com/music
Tweet
Tweet

View all posts by David →
This entry was posted on 27 March, 2021 in homepage. Bookmark the permalink.