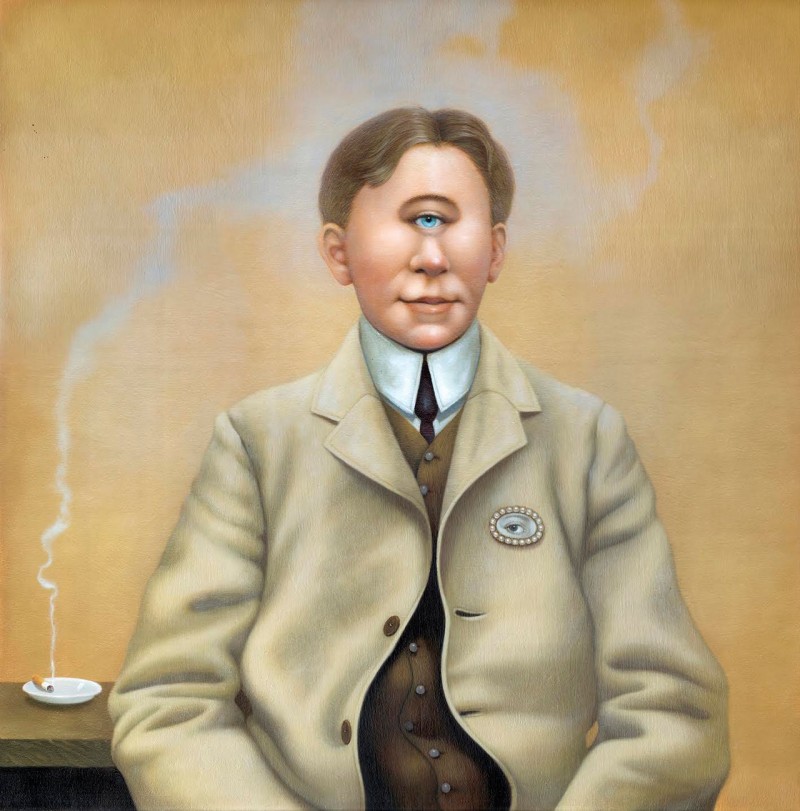 ‘What I like about this band is that what is actually doing is not what it appears to be doing.’ Thus sayeth the enigmatic Robert Fripp, now one of seven members of the current King Crimson, captured here live on triple CD and blueray dvd (which I have no means of viewing) wrapped – as Crimson releases have been for some time now – in a naive art image, this time a painting of a cyclops (albeit one who at times inside the box regains a more normal two-eyed appearance).

So what are King Crimson up to? Probably not what I think they might be. One possibility is simply a kind of greatest hits band and tour (well, tours, since the 2016 tour is now under way, and the box draws on the 2015 tour), generating cash for those involved, with the band perhaps now having a big enough cast of musicians to recreate some of the studio complexity of earlier works. Another is that Fripp has mellowed and aged enough to now engage with his King Crimson past, banishing business and personality demons and enjoying the fruits of his past, enjoying being part of both musical history and the musical present.

Another possibility is that this band is all about reconsideration and re-arranging the music of the past. With a frontline of three drummers (or percussionists), and saxes, flutes and keyboards to hand, this is a band who can reimagine and reconstruct music of the past for the 21st century. This seems to be an angle that many reviewers and fans are taking, but I don’t buy it. Nothing here seems very different to past versions, studio or live, of the music. Yes, there are a few new moments of improvisation here, but in the main this is a greatest hits package through and through. The third CD is even subtitled ‘Crimson Classics’ though that’s as vague and irrelevant as discs 1’s ‘Mainly Metal’. Crimson have never been metal in any sense of the word, and one can only assume this is some kind of wilful joke or playful misdirection.

What’s most likely is some amalgamation of all the above, but over-ridden by Fripp’s continuing insistence that Crimson has a life of its own and works best (or indeed works only) when that life spirit is present. You can call it mystical mumbo-jumbo if you like, but there seems a kind of truth here, although past members have complained that Fripp has pulled the plug just as the band got going. Anyway, there’s definitely a new spirit present in these recordings, and if it unfortunately ignores the 1980s Crimson incarnation (as guitar, stick & drums gamelan) it takes on and plunders every other version of the band to good effect, including the most recent.

This is hard-edged symphonic rock in the main, with (sampled or digitally recreated) mellotrons and clattering drums creating sweeps of sound and pulsating rhythms for guitars, stick, saxophone and flutes to weave over, and in & out of. Whilst there is not the chiming interlock of Belew and Fripp’s ferocious guitar frontline, Fripps’ guitar is as wondrous as ever, and Tony Levin remains one of the world’s best bass and stick players. I can’t say I like drums much, but the abundance of them here works well, although it all seems a bit bottom heavy at times. and drum solos (or duos or trios) remain to these ears both unrequired and unforgivable (with the sole exception of John Marshall’s ‘Four Gongs Two Drums’ on Soft Machine’s Bundles album).

I don’t quite know what to make of all this. But then according to Wikipedia ‘monkey mind is a Buddhist term meaning “unsettled; restless; capricious; whimsical; fanciful; inconstant; confused; indecisive; uncontrollable”.’ Whatever I think Crimson might be doing, Fripp will no doubt suggest something else, note that they wish their listeners to be restless and confused (etc.), so it’s hard to question or to criticise. Personally, I’d like to hear more experiment and improvisation, less of the resurrected progrock of the earlier albums, however great they were or are. Fan comments and feedback suggest I am in a minority. And actually, I hope for Fripp and his bandmates’ sake that this is about having fun and enjoying themselves. Heaven knows they , and we, deserve it. My monkey mind may not be unseated, and this release may not seem to be much of a radical action, but it is a nice little box with some great music hiding inside.

View all posts by Rupert →
This entry was posted on 22 September, 2016 in homepage and tagged King Crimson, Robert Fripp, Rupert Loydell. Bookmark the permalink.

One Response to Monkey Mind