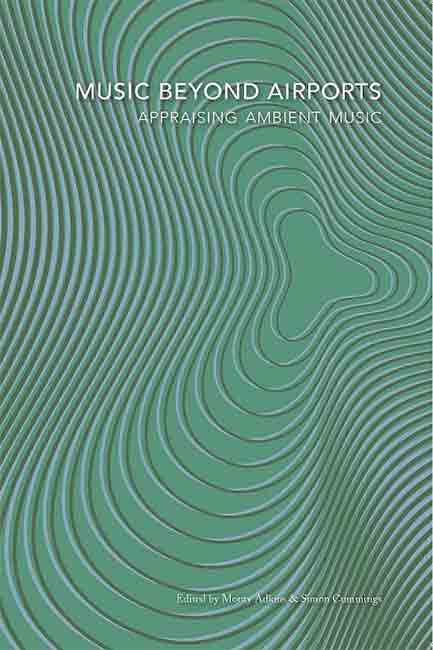 Simon Bray’s photobook is a somewhat literal and straightforward photographic response to the Brian Eno album is it named after. If I have a criticism of these beautiful depiction of landscape details and textures, it is that they are too literal, perhaps missing the point that Eno wanted to imagine the places he used as track titles (‘Lizard Point’, ‘Lantern Marshes’ [sic; it should be Marsh], ‘Dunwich Beach’, and ‘Unfamiliar Wind [Leek Hills]’) rather than depict them. It seems to me it was the unfamiliar wind Eno was interested in, not Leek Hills; and he is on record as saying that although he was sure he had been to Lantern Marsh he couldn’t remember anything about it, that it was in no way a literal depiction.

So maybe Bray makes too much of the connections here. These superb black and white images needed only an inspirational nod of acknowledgement to Eno, not the slightly over the top short introduction we are given. Whilst the Eno connection is of interest, and what drew me to the work, the art itself can stand up for itself. It’s use of shadow, focus, framing and detail is outstanding; the fact each purchase comes with an original print an extra delight. For me they transcend the Eno connection.

Eno’s On Land album is a key text in many of the essays/chapters in Music Beyond Airports, with several authors using Eno’s definition of ambient music, and others questioning and critiquing. As with many academic volumes of this sort, there are attempts to shoehorn the authors’ own research interests in, or extend what might be considered the normal extend of a subject. So, for me the chapters on ‘Channelling the Ecstasy of Hildegard von Bingen’ and ‘Adaptive Game Scoring with Ambient Sound’ seem out of place, and attempts to argue that noise music is in some way ambient too, beside the point.

But there are also some real insights and good discussions here too. Chapters which explore the impossibility of music ever being ignored or becoming ‘furniture’, ideas about spatiality, and an especially interesting take on sampling as time travel, with specific reference to The Orb’s ‘Fluffy Little Clouds’ and their use of Rickie Lee Jones and Steve Reich samples.

David Toop, in chapter 1, shows how you can tangent and include the unexpected within a pertinent and informed discussion. Here, he manages to discuss musical and aural intimacy, the concept of silence, the notion of ambient listening, and end up with a strong rejection of ambient (or background) music when it is used ‘to incentivise or[as] a backdrop to productivity, networking and self-realisation’. If it is, he declares, ‘then it has no story of its own, no story worth hearing.’

Ambient music, however hard it is to define or pin down, clearly still has many stories to tell that are worth hearing, and has clearly informed and changed other musical genres, or individual musicians and groups. So that we can talk of the ambient in relation to, say, work by Morton Feldman, John Luther Adams or Jon Hassell that might have previously been considered contemporary classical or (fourth) world music; or compositions such as William Baskinski’s Decay Music, which we might once have been simply categorised as processual drone music.

Both these books are intriguing. One extending the idea of ambient landscape into the realm of the visual, printed photographs on the page; the other an academic but mostly readable anthology of various and varied essays on a theme, each in their own way ‘appraising ambient music’. 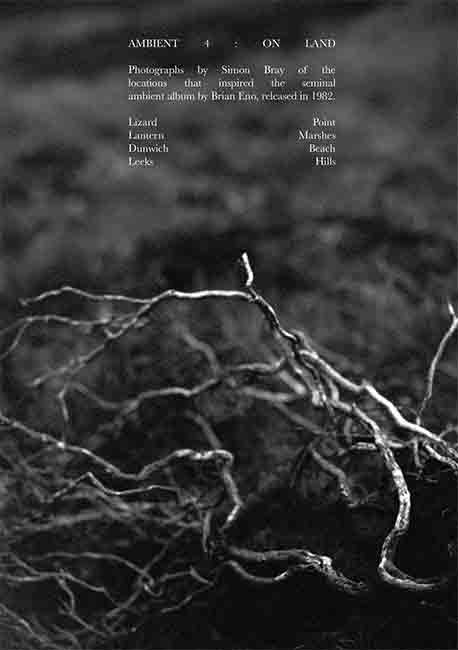 Simon Bray’s Ambient 4: On Land is available to buy at https://www.simonbray.co.uk/prints-publications/eno

At this link readers can download a free digital copy of the book, or opt to buy a printed copy.

Tweet
This entry was posted on 26 October, 2019 in homepage and tagged Ambient 4: On Land, atmospheres, language and sound, photos, Rupert Loydell, Simon Bray. Bookmark the permalink.