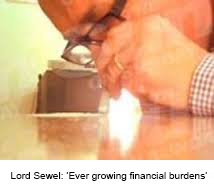 MP’s have claimed their recent 10% wage rise ‘fully justified’ after a rush on cocaine pushed the popular commodity to an all time high on international markets. Lord Sewel, Labour’s secret drug adviser, commented from a speeding police car, ‘The soaring price of cocaine is further undeniable proof that the MP’s wage rise to £70 000 a year is more than warranted. With the cost of prostitutes, lawyers, women’s underwear, flowers for angry wives and taxis to the job center also spiraling out of control we must ensure that all our trusted governmental employees can keep up with these ever-growing financial burdens.’

A policy unit established to set new falling standards in government has released a white paper suggesting that, along with protecting all-important MP’s salaries, the wage rise might have a ‘kick start’ effect on the local economy. Mark Staples, overseeing the Committee on Falling Standards (‘C.O.F.S’),  sniffed suspiciously and blabbered with white bits at the edge of his mouth,  ‘Facts are facts! Pure and simple! London’s cocaine trade is worth billions every year. With the House of Westminster along with other government offices here in the capital responsible for at least a third of this demand it would simply be financial suicide to freeze MP’s wages. When the economy is such a mess it is the duty of all Westminster staff to support any growth market.’

Mr Staples’ Committee has made other radical recommendations even calling for a trial period in which coke dealers would work the corridors of Westminster. His report stated that MP’s were missing important debates because they had to constantly leave the building to procure large quantities of the moreish, and nearly socially acceptable, drug. When asked to clarify his comments he repeatedly fidgeted with his ear and compulsively chattered, ‘Most of MP’s £300 daily allowance is being being spent on taxis and private transportation back and forth to Brixton and other locations. With our own crack team of ‘House’ suppliers, so to speak, Westminster staff can throw every bit of their undivided,  and extremely expensive, attention into their work. Which, after all, is what they’re paid for. Ha, ha, ha. Also, this massive surge in financial activity would be pumped directly back into the local economy. As far as I can see its a win win situation for everyone.’

View all posts by Ethan →
This entry was posted on 6 August, 2015 in homepage and tagged current affairs, Ethan Harrison, politics, satire, Social commentary. Bookmark the permalink.