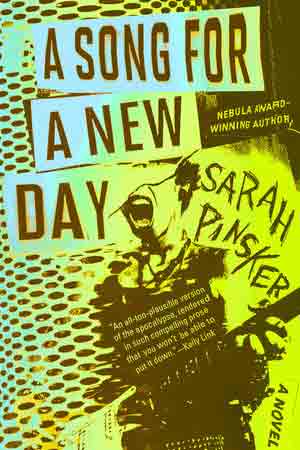 Although this has ‘Science Fiction’ written on its back cover, it isn’t. It’s a good old rock & roll novel set in a dysptopian near-future. Everything is even more online than today, call centres and warehouses proliferate, the web is now accessed through hoodies (‘hoodspace’), and live music is about to be outlawed due to some sonic and cultural terrorism.

Cue illicit gigs held in half-abandoned buildings and derelict cellars for the few music fans in the know, and also cue huge streaming services and corporate control of music. (Sound familiar? You see why I don’t think it’s science fiction…) Enter naive Rosemary and has-been rock star Luce, both on a collision course with power structures and each other. Luce is playing the underground music circuit, Rosemary is working for the corporation who seek to sell and promote new talent plucked from that circuit, yet also leave destruction, chaos and arrests behind them.

Despite some repercussions and naive assumptions on both sides, the two women slowly learn to work together, eventually calling a kind of truce in aid of revolution. Can music change the world? Of course it can! You just need a guitar, some mates and lots of networking and organizational skills. And plenty of attitude, talk and lurve.

Pinsker writes well about music, musicians and subcultures, and cleverly imagines a plausible future that builds on the present. She makes room for queer and non-binary genders and relationships, and doesn’t go overboard on impossible technologies or concepts. This is a down-to-earth, dirty and realistic future: our world crumbling as a result of power abuse by big businesses of the culture industries. If Pinsker is wildly optimistic about the effect of music (and she is) it’s an enjoyable and inclusive optimism, and one tempered with moments of wit, humour and feeling. From the hotel-room-trashing opening to the downbeat euphoria of the ending, this is a lively and entertaining romp.

View all posts by Rupert →
This entry was posted on 16 November, 2019 in homepage and tagged A Song for a New Day, Rupert Loydell, Sarah Pinsker. Bookmark the permalink.