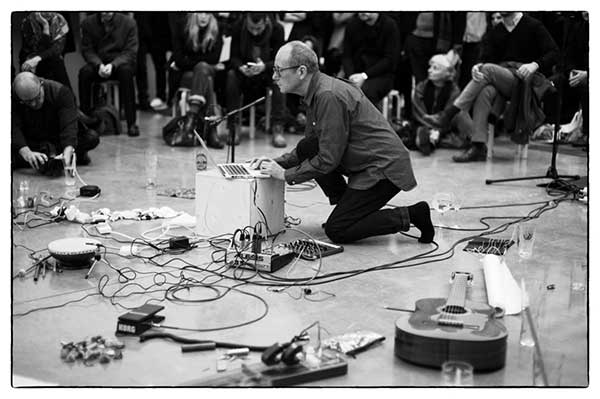 Flutter echo is the sound effect you hear when you walk through a space such as a narrow alleyway with walls both sides. It’s an appropriate idea for the title of this book: you have to be listening carefully to hear, or at least be aware of, it; and it’s an everyday event in the kind of space most of us move through.

David Toop is a write about and maker of music who is a listener. This is not as obvious as it seems: many music writers are far more interested in the sociology or image of music, of meeting their heroes, of putting themselves into the story. Toop came out of improvised music, with a heavy involvement in the London Musicians Collective, and was very quickly drawn to music from around the world, often recorded for ethnographical rather than musical purposes. He later undertook a trip to the Amazon jungle to try and understand (and record) the music in situ, as part of shamanistic rituals. With a love of rock and soul as well as the experimental, Toop was also part of hybrid projects such as The Flying Lizards and The Promenaders, where the experiments of free jazz and improvisation were applied, as it were, to reinventing and deconstructing songs. In recent years digital composition and recording has enabled his music to cross boundaries of time, space and location, gathering together sound and music in compositions that can often be described as sonic events, music that needs listeners’ full engagement and attention.

Toop started writing as part of the team at the LMC putting together their in-house magazine, but later found himself writing a regular column for The Face and other national magazines and newspapers. His first book was one of the earliest, if not the earliest, about the roots and rise of Rap, back when it was changing our ideas of music. Later he would write more thematic volumes about ambient music, field recordings and the sound worlds around us, implied listening and sound in fine art, each book an eclectic and wandering mix of references and ideas, each written with a subtlety, clarity and care unusual in the field of popular music.

I can’t have been alone a couple of years ago to have noticed ago that David Toop had written an autobiography that was only being published in Japan, in Japanese. Why did Toop’s ‘life’ need sharing, I wondered, and thought no more about it, until it was announced a year or so later that Thurston Moore’s Ecstatic Peace Library would be publishing an English edition this year. Of course, this isn’t really an autobiography, it’s a kind of gloss on or hypertext of his other books, a reflective journal if you will, adding layers of meaning and interpretation to the CDs and books on my shelves.

There are personal revelations here: I was surprised to find a younger Toop drinking and smoking dope with the best of them, empathetically amused by his long hair and flares back in the day (I say empathetic, because we all looked like that then), and moved by the endings of relationships and the fallout of his wife’s suicide. In the main, however, these are related to help us understand Toop’s then state of mind, the cause and situation of his work at the time, be that writing or music.

It’s not simply a linear narrative. As in his other books, there’s general sense of movement, but Toop often gets a theme or subject in his teeth and follows that elsewhere, occasionally repeating references to events already discussed, or coming at them from a different angle. The contexts and fascinations of his world are slowly revealed: the title basically says it all, this is a book about someone living within sound and finding out how to respond to and use that sound, be it in music or language. And also how to listen to and work with others.

There is a serious zen underpinning to the book. Toop clearly embraces and has an informed understanding of Japanese culture and rituals. He draws on the mix of acceptance, calm and engagement with both the now and the future he finds there. He has learnt to see and listen to the minutiae around him, to find and structure the everyday, to juxtapose the unexpected, and to never be frightened of embracing simplicity, be that his bamboo flutes or the sound of scrunched up paper.

This is a fascinating book, fizzing with ideas and observations, with memories and histories (sometimes shared – I went to the LMC’s grim London venue many times, including to see Toop play) but it is mostly a reflection on music and how and why it is made. Toop is generous to his friends and musical accomplices, and often self-deprecating and surprisingly personal, but it is always honest and outward looking. For anyone who thinks music matters, and because of that thinks it cannot simply be turned into muzak or do-it-by-numbers pop, this book will be a joy to read and a thought-provoking volume to keep on the shelf. 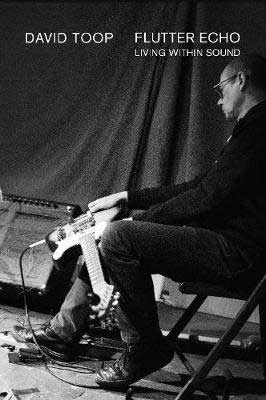 In conversation with David Toop: Unpredictable Conversations with Improvisers:
https://www.youtube.com/watch?v=3sjUvWmF5NA

View all posts by Rupert →
This entry was posted on 18 May, 2019 in homepage and tagged David Toop, Flutter Echo: Living Within Sound, Rupert Loydell. Bookmark the permalink.