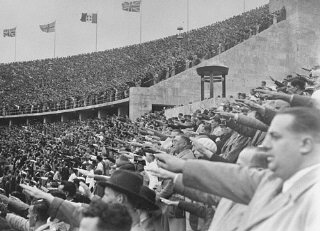 For anyone who really is fucked off with the Olympics – like Morrissey, whose whine seems plaintively authentic  – I can recommend an excellent purgative. Olympia, Leni Riefenstahl’s film of the 1936 Berlin Olympics, is the antidote we need, all three and a half hours. It seems like a Mel Brooks parody of the sporting event itself, a detournement par excellence,  a celluloid collage. As the great circus rolls into Berlin, it is wonderful to see – instead of Boris – a beaming Hitler. Nazi salutes are everywhere. It’s not just the Nazis; athletes from the competing nations do it; even the international audiences don’t hold back. The rest of the world always gives out about the Germans going along with Nazism, but in 1936 the rest of world was suckered too.

You think the Olympics aren’t evil? With the release of biopic Salute, Tommie Smith is in the news for having raised his arm in a black power salute at the 1968 games; thanks to the indignation of the I.O.C. and the American sporting authorities he never ran again. Yet almost everyone in Berlin was doing the Nazi salute and no one got into trouble for it. Just as Smith has been exonerated, apologised to, and lionised decades on, so every pompous bigwig, high society ligger, hare-brained sports reporter and intellect-neglecting athelete who succumbed to the Nazi triumphalism of ’36 should be belatedly, or posthumously, shamed. It’s a belly-laugh, for instance, to see a delegation of Frenchmen in berets marching into the Olympiastadion during the opening ceremony with hands and arms outstretched to the Thousand Year Reich, a Vichy France vanguard.

What Olympia makes clear is how the ruling class of the host nation uses the Olympics as an international showcase for its own ideology. It is thus fascinating, as we suffer the Tory Olympics, to compare and contrast it with the Nazi Olympics. Disturbingly, there’s more comparisons than contrasts. And Boris, not Dave, is the Adolf equivalent, the failed bohemian, the über-buffoon.

Did you know…? It was the Nazis who began the custom of the flame being lit in Athens and then relayed by hand and foot to the host city. All the Games since ’36 have kept up the tradition. Poor Nazis! No one ever thanks them. Riefenstahl’s film starts off in Athens, so it takes a good ten minutes of quasi-mythological scenery from the ruins of Greece before we see our first swastika – the first of many. (Bearing in mind current Greco-German relations, there is added comedy).

Nazi uniforms abound also. However, it says a lot that the ’36 Olympics was less militarised than the 2012. Everyone’s happy and smiling, even the SS. It gets surreal when you watch the equestrian events with Nazi officers competing in the saddles. And it gets chilling when you see Nazi officers firing their lugers in the shooting events. Whenever a German athlete does a winning turn, a camera hones in on the grinning Fuhrer. In one of the showjumping events, a truly evil hurdle threw every rider who tried, though most of the horses themselves refused to jump it. However, three German riders cleared it without a problem – obviously they’d had the chance to practice on the course. Hitler’s appreciative cackles seem satanic.

Jessie Owens – referred to by the English commentators as ‘the American negro athlete’ – stole the show in ’36 because he won four gold medals, more than anyone else. His achievement is a good argument for not boycotting dodgy regimes; his superior running and jumping made claims of Aryan superiority look like twaddle, legendary propaganda in itself. The film reminds us that he wasn’t the only black athlete; several of his black American colleagues also won gold medals, notably Ralph Metcalfe who was runner-up to Owens in the 100m but fellow winner of the 400m relay. There were no Africans in ’36. Only about 50 countries competed compared to some 200 today. It’s sad seeing the many Japanese athletes doing so well, a mere 9 years before the ultimate spectacle of the mushroom cloud.

Aside from the warped hilarity of the Third Reich tournament, something else is going on in the film. That is: Leni Riefenstahl’s own genius for film-making. This film was made after Triumph of the Will and her technical skills are even more finely honed. The footage of much of the actual athleticism is unbelievably beautiful, and would make any jaded Olympian cynic – like me – look again at what it is these sportsmen and sportswomen can do. It dignifies the athletes. Riefenstahl makes them look like gods, but it is also good to watch them without a million adverts being subliminally microwaved into the brain.

This film is a devastating portrait of conformity. Everyone involved should have been awarded a gold medal for sleepwalking.

Watch out for the Nazi eagle on the Olympic bell:

There is also an exhibition at the WIENER LIBRARY:

The Nazi Games: Politics, the Media and the Body

As the Olympic Games arrive in London this Summer, The Wiener Library will be looking back to 1930s Berlin.

Drawing on the Library’s extensive collection of propaganda, including pamphlets, photographs and illustrated books, this exhibition exposes the astonishing and frightening skill of the Nazis as manipulators of public opinion, while also highlighting the stories of people who resisted Nazi views of the ideal sporting body.

For any enquiries regarding the exhibition, please contact the Library.

One Response to NAZI OLYMPICS