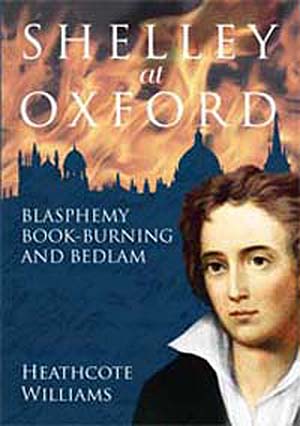 Although an aristocrat by birth, Shelley became a rebel, a passionate revolutionary, whose life’s purpose was to attack tyranny and injustice in state and society. His career of rebellion began at Oxford, from where he was expelled for atheism at the age of 19. From this crucial starting-point, Heathcote Williams provides us with a new account of Shelley’s message and gives us back the real Shelley, the intellectual revolutionary free of the romantic stereotype. In Shelley at Oxford, we have a raw and incendiary wild-child brought to life in a piece of writing that shows exactly why Shelley is thought of as so scorchingly subversive some two centuries later.

Heathcote Williams is an anarchist, magician, and writer. His unique form of polemical poetry, which questions and challenges established power and authority, is in the great tradition of visionary dissent. In many ways Williams is Shelley’s modern-day heir.

“I just finished reading Shelley at Oxford. What a glorious and fiery piece that is. I love it. It’s uplifting and inspiring … and made my evening.”—Boff Whalley of Chumbawamba