…And Pays Off IMF Debt With 240 Billion Drachma ‘Wonder’ Note 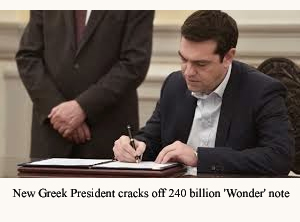 The new President of Greece Alexis Tsiriras has left IMF bosses with Fetta on their chins after paying off his country’s massive debt and bailout fee with a 240 billion drachma ‘Wonder’ note. Despite first reports spread by the BBC that Mr Tsirias ‘stole’ the note off a blind, disabled, old lady after mugging her twice in the street it was revealed that actually, moments after winning the election, the new Greek premier simply cracked it off on the back of a beer mat while he was having a celebratory pint and packet of crisps. Hence ‘Wonder’ for ‘Golden Wonder’ which are Mr Tsiriras’s favourite flavour.

After receiving the ‘Wonder’ note Christine Lagarde, International Monetary Fund CEO, waved her hands around like alcoholic Bill and Bens arguing over the last can of Special Brew and gasped, ‘Greece must take its global debts more seriously. It can’t think that it can go round making money out of thin air and using it to pay for things. Historically this has been the privilege of the banks and a privilege we intend to keep. There are three options Mr Tsiriras can take in regard to our demands for nationwide austerity. Financial bribes, sexual bribes, out and out bribes and totally selling out to the banks in every conceivable way and overseeing what will be in effect a fascist regime before being assassinated when it is time for him to be replaced or finding his country in an a very unfortunate, fully coincidental and thoroughly unforeseeable war.’When it was pointed out to Ms Legarde that this was more than three options and possibly six or seven she officially denied it stating she would never make such childlike errors about figures after all she was the CEO of the world’s most powerful bank. Explaining his economic strategy Mr Tsiriras laughed, ‘I don’t know why anyone hasn’t done it before. Surely it’s only as real or as unreal as the money the banks lend to us. Anyway, we have a little saying in our country, it was also the unofficial motto of my party, ‘Γαμώ the banks!’.Financial specialists are currently trying to work out what is actually wrong with Mr Tsiriras’s economic philosophy. The clever money seems to be saying that it is perfectly sound, though Robert Peston, chief BBC economics expert, claims the Greek ‘wonder’ note is worthless as it is ‘not covered with enough Satanic symbols like ‘proper money’.’

View all posts by Ethan →
This entry was posted on 29 January, 2015 in homepage and tagged Alexis Tsiriras, current events, Ethan Harrison, President of Greece, satire, spoof news. Bookmark the permalink.