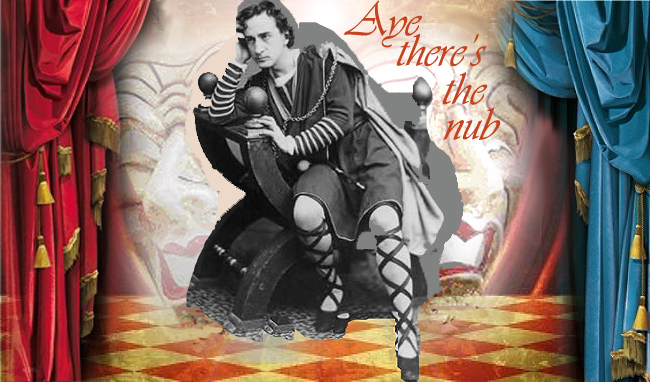 Sometimes an actor will find himself on stage
Having forgotten what he’s meant to say.
He’s dried completely; his prompter’s in the pub;
And it’s the middle of a Shakespeare play.

But as it’s Shakespeare (and Shakespeare’s often obscure),
Actors have a nonsensical trick to cover this.
It’s a thespian ploy called ‘nubbing’, but few people notice
When an actor’s ‘nubbing’ (or taking the piss):

“…List, I sense a nubbing in far glens,
Where minnows swoop the pikey deep
Which is unpiked less pikey be,
Cross-bolted in their crispy muffs

And choose the trammelled way.
Oh freeze my soul in fitful sleep
Lest wind-filled sprites bequim the air
And take us singly or in threes

In mad agog or lumpsome nub,
Aghast to Milford Haven….”
These Shakespeare-like cod phrases are used to fill the chasm,
And they tumble over each other in nervous succession.

There’s only one rule governing what the ‘nubber’ invents:
That the last phrase to ring in an audience’s ears
Must always be ‘Milford Haven’, and be shouted out loudly
So those back-stage can be alerted, then they’ll gather

But if he happens to be unpopular he may be left there to hang,
In that spotlight that normally fills him with such elation,
So frantically he’ll try to make up more and more nonsense,
But always making sure to finish with ‘Milford Haven’.

For these two words are the secret signals that indicate
That someone’s lost on stage, frozen without a clue,
And may be in imminent danger of dying a thousand deaths,
Until a kindly cast member can come to their rescue.

To an audience a clever ‘nub’ can pass for Shakespeare himself
So someone seeing Hamlet, the Danish prince,
May be transported by the tormented egghead’s sorry predicament –
Unwittingly they’ve been manipulated by gibberish:

“And now, methinks, I must away to horse,
My nub is sorely pressed and, hark, the eagle,
Soaring high and cawing like the creature of the night,
The shard-born raven, proclaims we are bemused
And struck so far from finding our next line
That happy is the man at home in Milford Haven.”

Then, on catching the ‘Milford Haven’ cue, a fellow actor will step out
From the wings to save the day; to partake in the conspiracy
And suppressing a giggle, he picks up from where the real play left off,
But the forged Shakespeare ‘nub’ enters green room history.

————————————-
With acknowledgments to Michael Coveney, chronicler of the nub in ‘Aye, there’s the nub: Amnesia – Michael Coveney on the persistence of a noble theatrical tradition’; London: New Statesman, 28 March 2005, and to Donald Wolfit and to Ken Campbell (authors of the two nubs quoted here) and to Alan Cox of The School of Night (and a quondam nubber).