Michel Houellebecq is an acclaimed but also notorious author, who is renowned for what can only be called shit-stirring, offering straight-speaking opinions on all manner of things, in a way designed to provoke outrage and attract attention. Although his novels are big sellers and critically acclaimed, he has been accused of racism, defending paedophilia, attacking religion and of being both too right wing and too liberal. Interventions 2020 is a timely collection of essays, articles and interviews, offering a broad overview of this author, and perhaps a chance for reconsideration and disarmament. 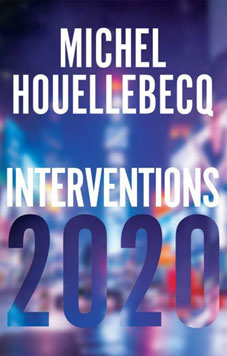 Actually, cancel that last one! The first piece is titled ‘Jacques Prévert is a jerk’ and later on we get to read ‘Towards a semi-rehabilitation of the hick’ and discover why ‘Donald Trump is a good president’. But these are all calm and reasoned essays, even the Trump one which combines arguments for Brexit and against NATO with the opinion that America needs to look after its own. In fact Houllebecq ‘couldn’t care less’ about the election of Trump, and although he thinks ‘President Trump strikes me as one of the best presidents America has ever had’ he quickly goes on to assert that ‘[o]n a personal level, he is, of course, quite disgusting’, and that in the future he ‘may well have been a necessary ordeal’.

It’s that mix of rudeness, clear perception and playful disingenuousness that attracts me to Houllebecq, even when – as is often the case – I disagree with him. There seems a subtext here that says the Americans not only got what they deserve but perhaps they needed it to clarify their political situation.

The Trump article is not, however, a major piece; like many of the works here it is short and to the point. Elsewhere he sings the praises of Neil Young, reviews books and offers cynical insights into ‘The Party’ (‘What the hell am I doing with these jerks?’), Pasolini’s proposed film of the life of St. Paul (which turns into a discussion about New York), reviews photographic exhibitions and disses a number of fellow authors.

All are witty, accomplished pieces, but the important part of this book for me is the interviews which are included. Here, Houllebecq is not afraid to take on big topics such as religion, society, sexism, race and censorship, and to do so in an informed way. Opinion is informed by philosophy, theology and media theory, as well as personal experience and literature. It’s clear that Houllebecq is simply open to writing about and discussing what others call pornography, sexualisation, violence or paedophilia; that he does not wish to censor it or embrace it, just acknowledge in his fictions that these things exist in the world.

He is at his best, his most lucid and informed, in a lengthy exchange on religion and belief with Geoffroy Lejeune, which was first published as a response to the question ‘What the Catholic Church should do to restore its own splendour and repair our dilapidated civilization’. Although it sounds limited in focus, it’s the most far-reaching and wide-ranging interview, touching upon power, art, science and sexuality, as well as the establishment church itself. Although Houllebecq is clearly part of 21st century culture, he is also someone who suggests we should all sometimes disengage from the noise of [dis]information and learn to think for ourselves. Interventions 2020 is a considered and engaging read 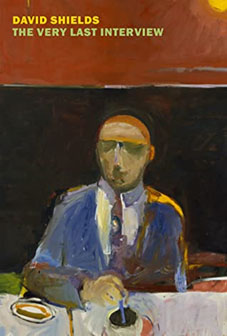 David Shields is also a provocateur, not because of his subject matter but because of the way he collages and juxtaposes quotes. Recycling written material he assembles immensely readable and entertaining books such as Reality Hunger, a manifesto and discussion about where fiction might go in the future. (He’s keen on non-fiction, but also likes it when it blurs into creative non-fiction.)

The Very Last Interview manages to be both a conceptual work and a revealing self-interview; it’s also very funny. Shields gathered up his interviews from the last 40 years and collated then reorganised and rearranged the questions into chapters with headings like ‘Childhood’, ‘Failure’, ‘Audience’, ‘Capitalism’ and ‘Criticism’. Shields provides no answers, quoted or new, for this book, but the nature of the questions, sometimes personal, sometimes knowing or assertive, sometimes plain dumb, offer us insight into not only Shields but the nature of fame and the interview process too. Many of the questions are passive-aggressive, many contain their own answers; it is clear the interviewers do not care what Shields thinks, since they have already made up their mind:

As a writer did you encounter any difficulty in the early going?

Did you ever feel like throwing in the towel?

What kept you going?

What keeps you going now?

He is, I suspect, but not as sure as Philip Guston, the painter, is in I Paint What I Want to See, a rather ad hoc collection of essays, notes, conversations and interviews. It’s not so much that he is opinionated, just that he seems to think everything he says is important or clever.

The conversation with Clark Coolidge, for example, is reported verbatim, despite being full of asides, hesitancies, irrelevancies and meandering. I know Coolidge as an experimental poet; here his provocative and open-ended questions are answered with blunt assertions and personal experiences. I wanted more.

Elsewhere Guston navigates around answering serious questions about his work from the likes of renowned art critic Harold Rosenberg by adopting the approach that things happen… It’s only in some of the studio notes about his own work, or short, focussed pieces on Piero della Francesca and Morton Feldman, that it becomes clear that Guston has thought about and informed his own painting by looking at his own work and that of others. But then he doesn’t need to, he can generalise and big himself up at the same time:

Now, all good painting, and I think my painting is good, has […]

Not only does he think his own painting is good, it appears to be informed only by ego:

There is nothing to do now but paint my life

Carry on. But do try and think about why your life might or might not be interesting to others. I for one, remain unconvinced by Guston, who is far more absent from his own book than Shields is from his.

View all posts by Rupert →
This entry was posted on 23 April, 2022 in homepage and tagged Oblique Autobiography, Rupert Loydell. Bookmark the permalink.