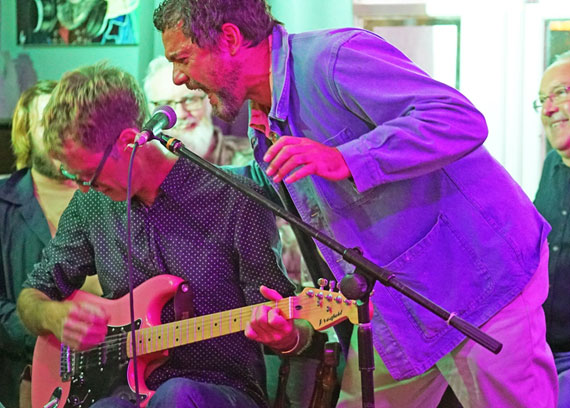 Travelled down by a bus and two trains from the (relative) Wilds of Eyemouth in the Scottish Borders to join in with so-called ‘Freedom Day’ in the Upper Calder Valley of West Yorkshire. It felt odd. A bit surreal and unsettling. Todmorden – my Alternative Home. Over four weeks, I’ve watched, listened, danced, supped cider and taken pics at a host of gigs, mostly indoors. Hardly a mask in sight except for some on public transport and probably a few more in super-markets. 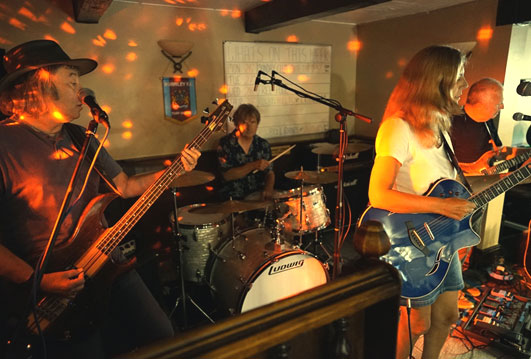 Bands such as: Sneeky, Bite the Dust, The Chain and a Covid-reduced, Backup Band) purveying mostly well-executed ‘covers’ – you know the sort of thing: Beatles; Stones; Survivor; a lot of Fleetwood Mac; some still ‘Daydream-believing’; a few ‘Stairway(s) to Heaven’; even more ‘Knockin’ on Heaven’s Door; ‘Hey Joe’ (is it really you?) and good to see you back, ‘Hey Jude’, too… Then there was Neil and Almighty Sound playing a Sunday set outside the Tod Market Hall and the wonderfully eccentric one-man band inventing new songs on a street corner. All good to witness. Old and New Life Returning. 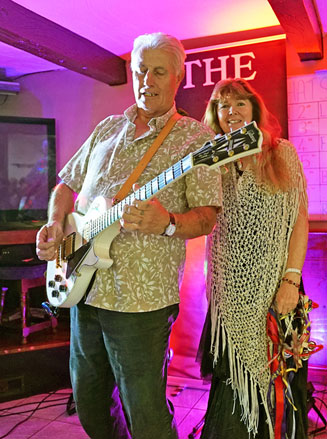 No more ‘mitigations’. No more yelling garbled messages through mouthfuls of mask or face-coverings, and across the great social-divides between segregated, socially-distanced tables. Many more smiles, hugs, dancing and generally Good Vibrations. 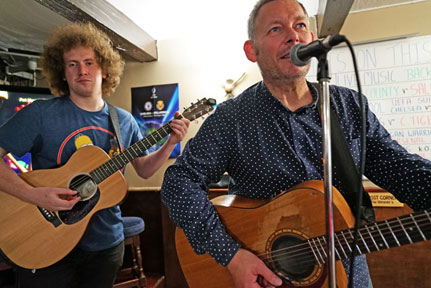 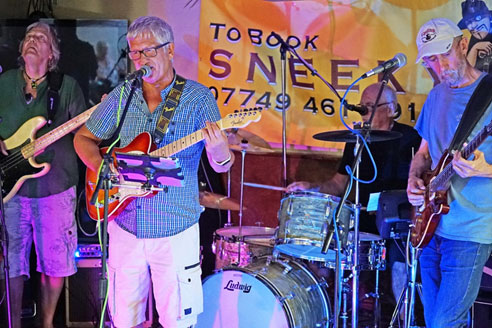 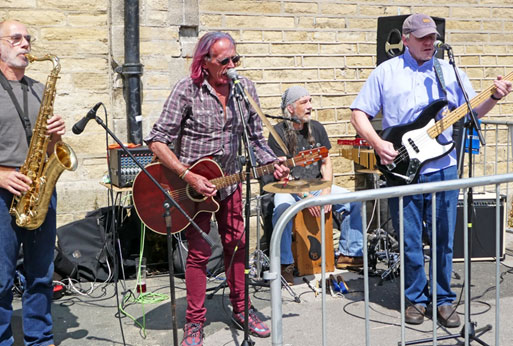 And down at the wild and wonderful Golden Lion (GL) pub and music venue, life has kicked back into gear. A nice mix of punters of all ages, genders and sexual orientations. Plenty of ‘sounds’ from all around the globe. From EDM to World Party Music; punk to indie; folk and reggae – new music/old music. Bands travelling many miles to share their love, enthusiasms and music with bouncing, having-it punters. Glimpses of freedoms that have been sorely missed. This pub is Haven and a Heaven for the Freedom Seekers and Experimenters. But, for many older folk too, it is their Club House. Their Home and Refuge insulated from the many unpleasant realities of Covid-times.

If you’d seen the posters for quite a few of the upstairs and downstairs gigs at the GL and on-line publicity, it was sometimes hard to work out which were Dj sets and which were live bands. Many performers were kind-of incognito, performing with friends and unusual line-ups, away from pretty well-known bands like Biffy Clyro, The La’s; Cardiacs, Zutons, Gong, Cast and more. The punters at the Lion are a substantial sub-strata of The Party and never-ending Carnival of Life.

At the end of the day, these Freedom Days have re-affirmed the positives. Some Kindness, some rock ‘n’ roll. Dancing away the blues and back into the Dance of Life! 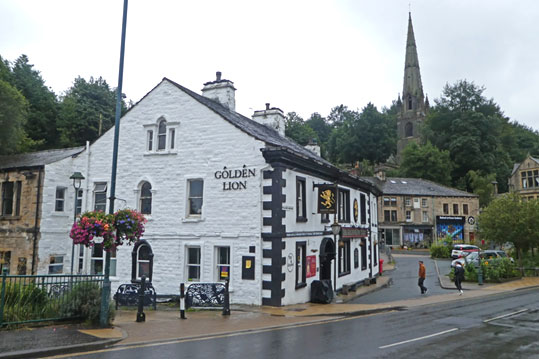 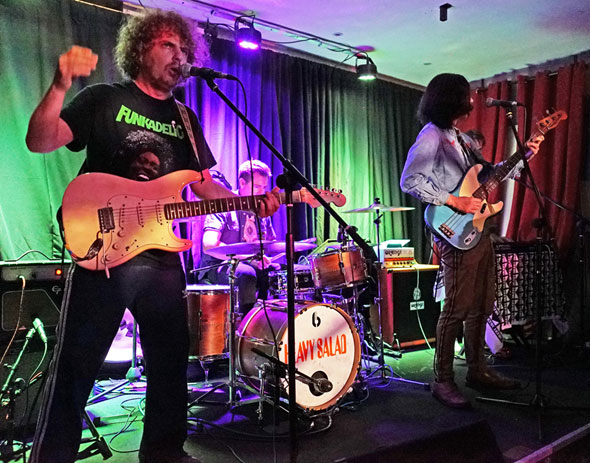 Here are a few more pics from the Golden Lion. The really rather wonderful, Silent-K band – with a bit of luck, good support and management, they should go far. They have the material and I’d really recommend them ‘live’, and do look out for their videos, songs and album as they hit the web-waves. How should I describe them? Powerful, something unique. Heavy-ish. Psychedelic, punkish, not-Prog, but with proper tunes, melodies and catchy, punchy hooks. A must-see band…from Liverpool. I want to get my hands on their album – now, but am making do with the T-shirt, for the present. 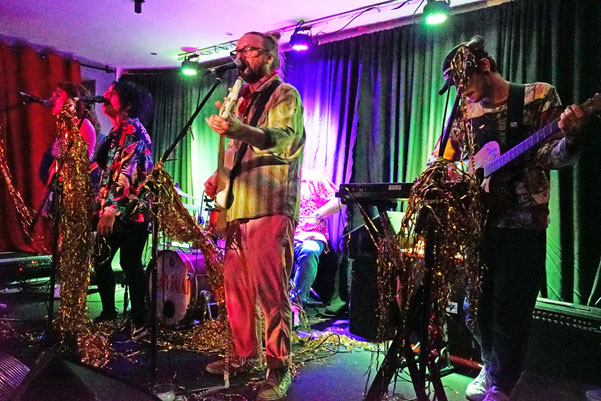 Likewise, Heavy Salad look good, with a lively, psychedelic sound. Stylish with an odd, full-on vocal presence with three Priestesses providing a powerful choir-sound to the proceedings. Their videos look a bit more folksy. Live, they need a bit more time to get back into full-power mix-mode, post-lockdown. 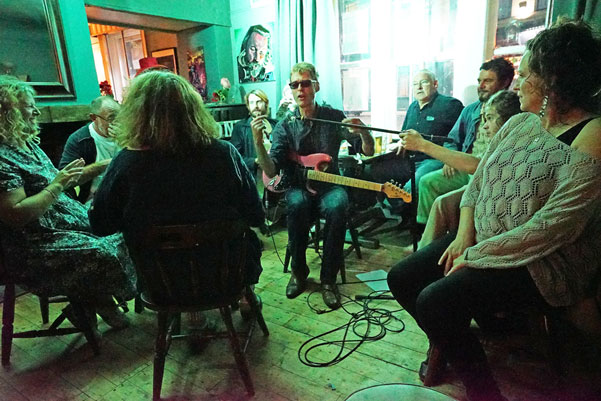 Music continued downstairs on the stage in the GL bar with troubadour, Barry Sutton, the singer/guitarist best known from Cast and The La’s, offering warped covers and originals, entertaining the revellers. Superb.

Video of ‘Once in a Lifetime’: https://www.youtube.com/watch?v=7FomNR_o9Yo 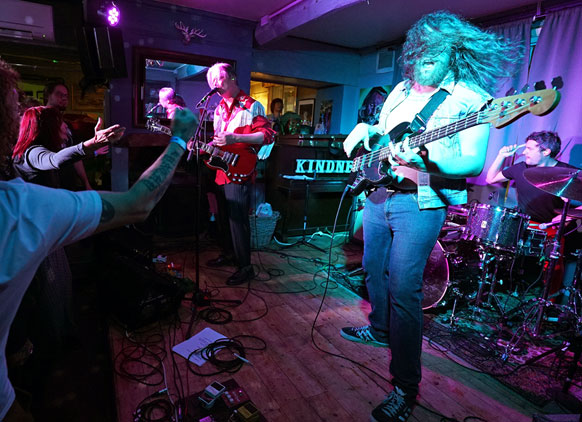 A highlight of Freedom Days was Mike Vennart’s Walpurgis – a celebration of Black Sabbath music, kicking off with a magnificently, ear-shredding and classy rendition of the ‘Paranoid’ album. A truly magical evening – noisy, friendly, smiling, laughing. Boogie-and air-guitar time. Big Love to Mike and his mates…a ‘special’ occasion. Mike was once in ‘Oceansize’, but has also contributed to many other musical outfits including his own ‘Vennart’ and as second guitarist in ‘Biffy Clyro’. He was joined in Walpurgis by Ben Griffith on bass and Joe Lazarus on drums: 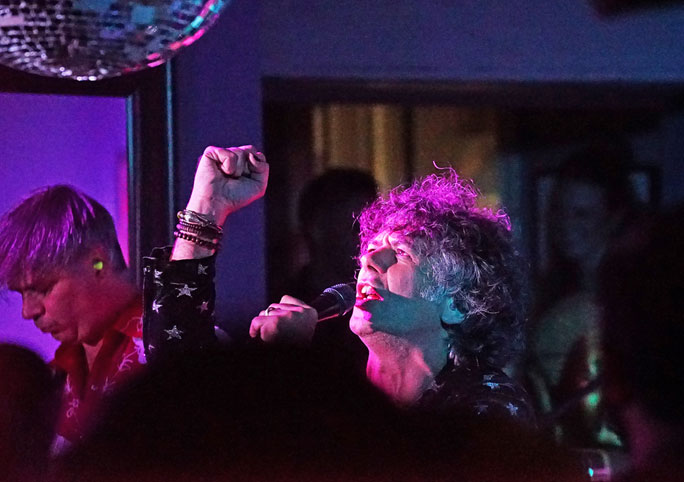 And, it was fab to see Kavus Torabi join Walpurgis on stage, and later on, performing from the Dj-booth. Kavus seems to pop up every-which-where, including music and a new book, ‘Medical Grade Music’ with Steve Davis (snooker ace/muso/dj), Gong and Cardiacs. He’s a bit of hippy-prophet in my book!

Golden Lion Todmorden. More a Way of life, than a pub!

There are quite a lot of Facebook sites for the GL ‘Family’. Sometimes, a bit confusingly! Here’s Richard’s and then Gig’s. 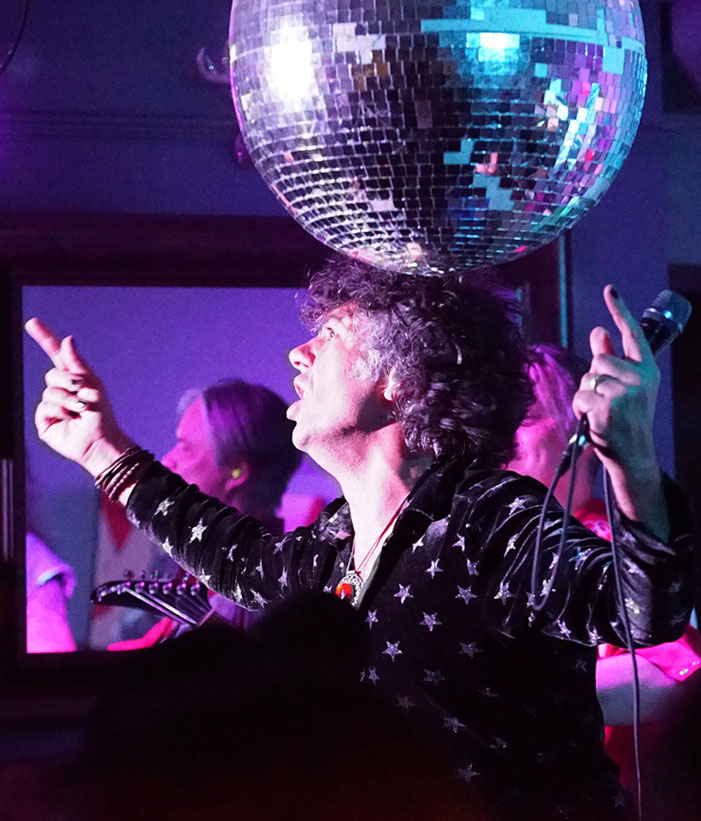 Tweet
This entry was posted on 21 August, 2021 in homepage and tagged Alan Dearling. Bookmark the permalink.