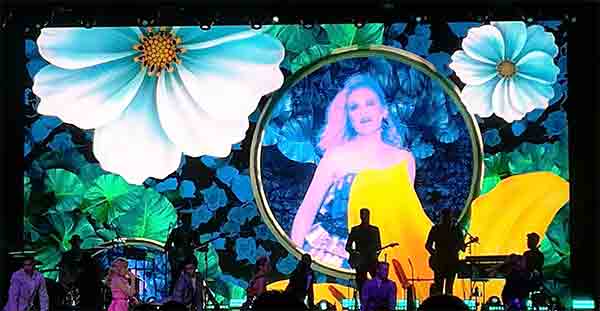 It’s a party at the Eden Project tonight. The sun has been shining, the sound is perfect, and everyone is in a good mood. The audience isn’t what I expected, it’s more like a senior hen party, with middle-aged daughters in tow than anything else, and the fruit cider is flowing.

I think I must have got to know Kylie’s songs by osmosis. If you’d asked me before last night to name any Kylie songs I’d have said ‘Can’t Get You Out of My Head’ and ‘I Should be so Lucky’ and them muttered something about Nick Cave and Michael Hutchence, but last night I knew almost all of the songs once they got going. And so did everyone else.

Kylie is an accomplished performer. She flirts with the audience, skips about the entire stage, and isn’t overwhelmed by her dancers or backing singers. The simple set of mirrored pillars come climbing frames are used quite subtly, and the back projection film adds just enough extra visual interest. But mostly it’s about a blur of songs, carefully sequenced into a dynamic whole.

The only two songs I didn’t know were, along with an acoustic version of ‘I Should Be So Lucky’ (still a great song even without its electronic edginess), the best. One uses a sample of Bowie’s ‘Fashion’, along with striking red and black lined video images, the other was funky as hell – it might have been an INXS cover or tribute, but whatever it was it provided a dynamic rock interlude between the singalong pop.

The mums are dancing and embarrassing their daughters, the few kids present are skipping together, a tall neighbour is handing out fruit pastilles to all and sundry, everyone is smiling and enjoying themselves. The glitterball spins, the biodomes light up in soft colours, even the bus driver who take us back to our car seem to have had a good time. I’m not going to make any great claims for Ms. Minogue’s music, or rush out and buy her greatest hits, but she is an accomplished entertainer and great fun to watch. It’s been a real party at the Eden Project tonight 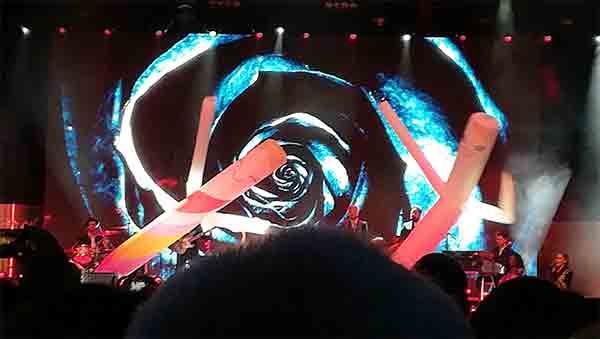