ON THE THIRTEENTH DAY 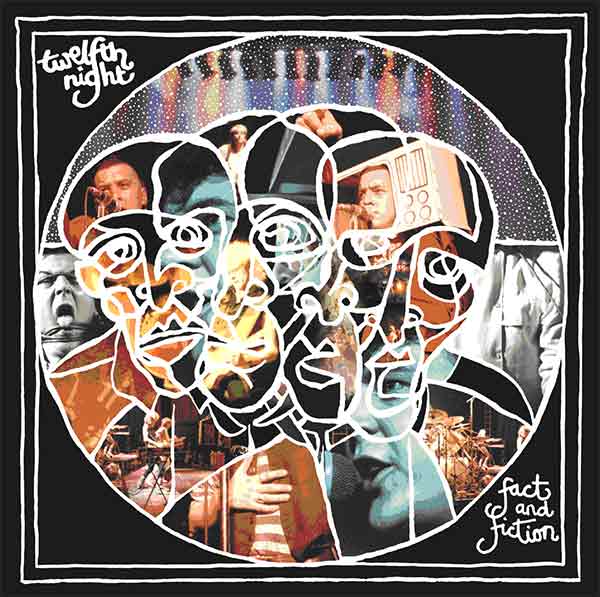 On the release of the definitive edition of Twelfth Night’s Fact and Fiction (Festival Music, 2018)

Great bands linger on in recall even if they make current music, but for those who stand frozen there is still plenty of heat to be gained. The forces between invention and documentation are as visible as ever in the long awaited release of the deluxe and definitive version of Twelfth Night’s seminal album, Fact and Fiction. Their first with inspirational and much missed singer/lyricist Geoff Mann, this record was as substantial a statement as Marillion’s Script for a Jester’s Tear, of the same year, or the early works of any of the host of other groups emerging onto the new or neo prog scene of the early 1980’s, such as IQ,  Pallas and Pendragon. The band members and classic line-up of Mann (vocals, tapes), Andy Revell (Lead Guitars), Clive Mitten (Bass, Keyboards, classical guitar), and Brian Devoil (Drums, percussion) equalled Gabriel era Genesis or the topographically infamous Yes Mach Two, in both their range, skill and adherence to this artful musical form that dared to extend the boundaries of what was possible in, with and around popular song.

Fact and Fiction is not an album of noodling and excessive virtuosity, but instead one of searing dynamics and beautifully controlled sensibility, from the opening synth fed poem of We are Sane, to the still shattering Creepshow and Love Song, that each reflect on notions to do with the systems of belief.  This new mastering and loving act of restoration rewards the prospective listener and honours the music that inspired it. As Genesis were taking the Abacab in order to lose their inhibitions with Mama and Yes were re-gearing for a renewed sense of renumeration and Pink Floyd were bunkering down in  the Waters drained trenches, this emblematic song suite was a continuation of the stylistic innovations laid down in the previous decade.

Mann’s vocal dexterity and sense  of urgency was equalled by the grounded poetics of his lyrics. Devoil was an solid and an entertaining a drummer as Bruford or Collins, Revel and Mitten as skilled and colourful as Steve Hackett or David Gilmour, and Mitten on bass and as main composer was a force unto himself, creating soundscapes and invigorating structure effortlessly, as his playing embued the dazzle of John Entwistle and Chris Squire with a new dynamism.

Fact and Fiction holds a rare distinction in being a much lauded album that has been severely neglected over the years.  Its vision is as clear sighted as any of the great records of that decade, in any musical genre, and the beauty of songs like This City, Human Being, Sane, Creepshow and Love Song, fulfil the necessary constituents of all great pieces of art; chiefly to be undeniable in both the beauty engendered and the resonance received.

Extra tracks on disc 1 Paradise Locked, an enchanting and staggering fragment of ominous chord and charred breath, early song East of Eden, as powerful as the James Dean film from which it takes its name and their much celebrated, soul charging take on Lennon and McCartney’s Eleanor Rigby round off the disc with fiery urgency. Here the multi platter of these deluxe editions ushers in the richest of feasts as the attendant listeners are able to dine on the full range of not only what’s on offer but also what the band had intended. Whether classic albums are designed in conception is a moot point, as opposed to revealing themselves from a wider menu of endeavours tested and tasted by the musicians. Whatever the truth, thirty six years later, the food remains fresh to the tongue and the pleasures of consumption sweetly resound in the ears.

Disc 2’s live cuts and additional songs reveal just how magnetic and special Twelfth Night were in their prime and repose, as newer and more recent versions of the Fact and Fiction material featuring Mark Spencer, Andy Sears and Geoff Mann’s son James on vocals show how durable and ripe for re-interpretation these songs were and are. The simple opening guitar figure of Creepshow bears as classic an imprint as Stairway to Heaven, And You and I, or Blood on the Rooftops, and the eerie cascade into crescendo of We Are Sane is joyously dark and disturbed.

Fate was never entirely on Twelfth Night’s side. Geoff Mann’s departure from first the band and then the world was a huge tragedy and his personal legacy as a man, a man of faith and a solo artist is an exemplary one, charged as it was by the pursuit of new musical and lyrical stylisations and the sincerity of a profound sense of faith. The band’s next challenge therefore came with the arrival of Andy Sears as vocalist, and a faulty major label deal, precipitating a further series of realignments, which led to long periods of inactivity, and to the band members forging new careers in everything from Cancer research at the highest level, to accountancy and studio hire. Since that time, Drummer and founder member Brian Devoil was worked tirelessly and with the same attention to detail that Jimmy Page has focused on the Zeppelin catalogue (albeit with a far smaller budget) to preserve the work of this important band.  If Marillion were a kind of Christ in waiting, both in their Fish strewn river and latterly as Crowd funded industry saviours, then Twelfth Night were very much John the Baptist, albeit with greater manners  and attention to hygiene.  They produced a body of work that explored how progressive rock music in the truest sense of the word could appeal to all people, subtlely and passionately connecting the primal forces of creativity with the secondary ones of delivery and presentation.

These accomplishments are suitably demonstrated on Disc 3 of this release, where various established names in the new prog cannon tackle cover versions of the albums songs,  from Tim Bowness’ beautifully rain, river and echoflex sounding version of This City to Clive Nolan’s synth glittering and glory fed  World Without End.  Dean Baker provides a brief electro fused treatment on We Are Sane’s opening glissando slide, which is very much dépêche a la mode, while Mark Spencer and Lee Abrahams golden stringed The Poet Sniffs a Flower  is a thing of wonder. Pendragon’s Human Being is as strident, artful and muscular as their own music and Galahad’s take on Fact and Fiction has a beautiful airborne lightess to it, as it skitters and skips from the cloud. Alan Reed and Kim Seviour’s electric piano led version of Love Song celebrates and marries  Mann’s original religious connotation to a more personal one, emphasising the song’s perfection with a special sense of clarity and attention.  Coburg revisit This City with a cello resonant metropolitinism and a new version of Creepshow entitled Creepyshow by TN, arrives with echoes and string scrapes that re-invent and embue this classic piece of horror and ambiance with an entirely new skeleton. The clarity of finger, thumb and intention is there as Mitten’s bass rises out of the keyboard laden mist, mixed and remixed by a timely sense of renewal. That the disc ends with Geoff Mann and his Eh band’s versions of  Fact and Fiction and Love Song takes the record back to where it started, honouring an influence while at the same time extending its possibilities. The efforts and indeed love placed by Devoil and the rest of the band and team into this release and the other titles that preceeded it are stunning. This update completes the official body of work, but there  will I suspect, be more to come.

Purety and provocation are rare things in both life and music, but this timely, precise and beautifully packaged and presented release shows how if Mann’s God rested after the first week of creation, his innovations commenced work well into the following week, producing music that cannot fail to touch anyone with enough sensitivity and intelligence to appreciate it.

Great bands and great music may not always receive the acclaim they deserve, but like a mirage in the intense heat of unwanted or long sought for attention,  or in a bush fit for burning, one only need stare out the night to be saved.

What fictions we live and what facts we escape from.

In work like this, rest new orders and different ways how to be.

Buy the album of course and unite what was lost to the living.

The singer sung sweetly.  Behold, from a slightly souring night, a fresh day. 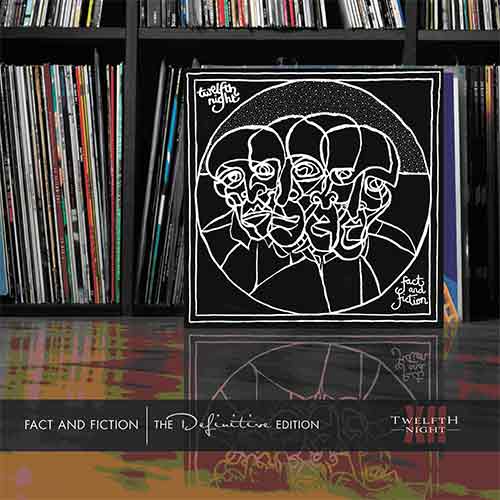 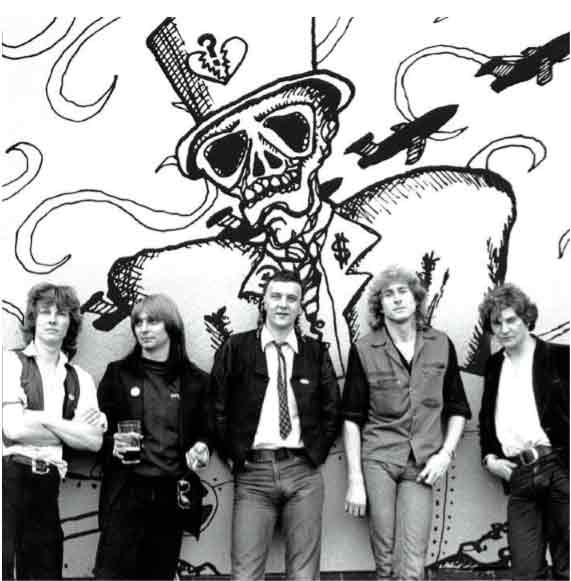 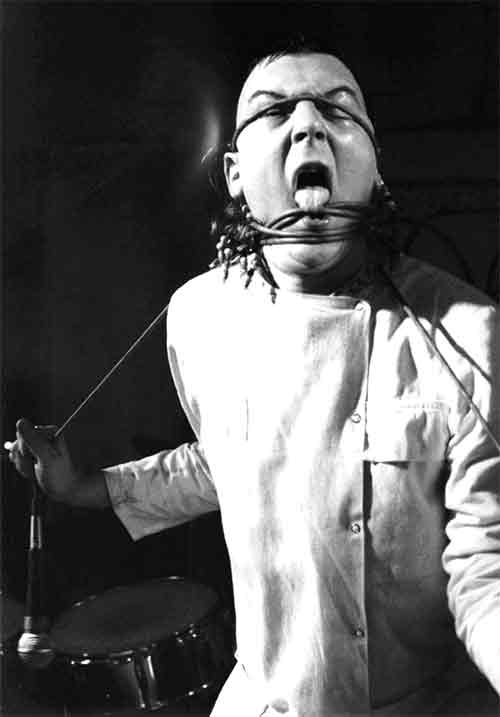 View all posts by David →
This entry was posted on 27 June, 2018 in homepage and tagged David Erdos, Twelfth Night. Bookmark the permalink.